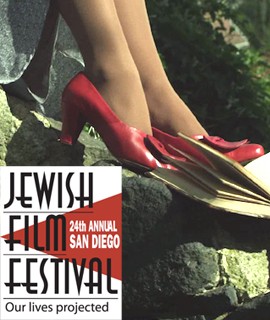 It ‘s amazing how much emotional wallop can be packed into 18 minutes of creative and powerful filmmaking. The evidence, for example, is on screen at the ten-day, 24th Annual San Diego Jewish Film Festival in La Jolla, CA.

The unique film “Shoes”, written and directed by Ukrainian-born Costa Fam, is one of the fifteen ‘short films’ in the festival that is included in the Joyce Forum special section.  The Joyce Forum, founded by San Diego patroness of the arts Joyce Axelroad, is a platform exclusively for the short film format.

Short films employ all of the elements and technical skills required of full-length feature films, except that they must say and show what needs to be accomplished in a “shortened” time frame – usually under one hour.  It’s a creative, precise, and highly disciplined format within the motion picture genre, which, by the way, is expressly suited for today’s attention-span challenged younger audiences.

The story of the film “Shoes” is cleverly told without dialogue or seeing the faces of the actors.  This unique film approach immediately engages the viewer; drawing them deeper into the story that director Fam wants to tell.

“Shoes” is a powerful, yet tenderly crafted movie, that traces a pair of red shoes from their purchase by a young woman just beginning to enjoy the pleasures and dreams that life has to offer.  It follows her through her courtship, marriage, childbirth, and the rearing of her children, and ultimately, to the ovens of Auschwitz.

The musical score that underpins every frame of the film beautifully and emotionally composed by Egor Romanenko (director Fam’s nephew), is a major component in the film.  If one parses the on-screen images to the musical score, where each character is represented its own musical instrument or instruments, it becomes an easy way of following the on-screen, non-dialogue action.

For example: the light notes of the flute represent the young couple protagonists.  The heavy-handed low notes of the piano coupled with the bass drum, represent the evil villains – the Nazis and all that they imply.  The music the other instruments play, perfectly integrate the feelings and the emotions of all the characters.  It’s a mini primer on how effective and necessary music is to motion picture filmmaking.

Before the screening began, the audience was treated to a live performance of the film’s score by the 50- piece San Diego Chamber Orchestra under the baton, of Dr. Angela Yeung; Professor of Music, at University of San Diego.  She outlined in detail the role of each instrument and how it interacts with the screen images; thus enriching the overall motion picture performance of the film the audience was about to see.

The screening was followed by a Q & A session with director Costa Fam, with simultaneous translation from Russian to English by his wife Irina, a Russian born graduate of the University of San Diego.  Fam, admitted that, “every time I see “Shoes”, I see a different aspect of my film.” A question from the audience asked how is the audience to interpret the last scene where an elderly shoeless man is seen walking alone toward the gas chamber?  “I purposely left the ending to be one of ambiguity. It’s up to the viewer to read whatever he or she wants to read into the ending.” he responded.

He praised nephew-composer Romanenko for a brilliant musical score, and spoke of a new project that is related to the film, one in which, he is hopeful that one day a copy of this film will become a permanent addition in Holocaust museums all over the world.

If that project comes to fruition, it would truly underscore the oath and the resolve that “Never Again” embodies.