It Happened in Saint-Tropez 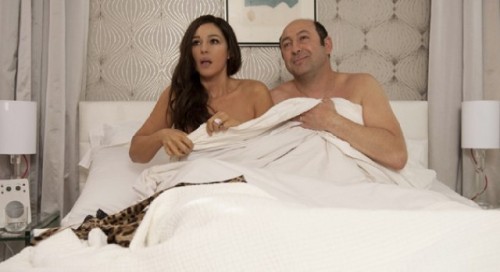 In bed with a French comedy. 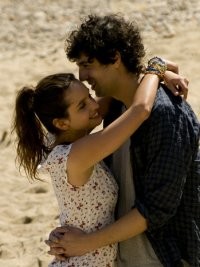 “It Happened in Saint-Tropez” is a saucy, delightfully entertaining, zany, Rom/Com of a movie with touches of farce, that launched the ten-day San Diego Jewish Film Festival on February 6th.  Hey, we’re not discovering Radium with “Madame Curie” or the antics of the Marx Brothers in “A Night at the Opera” here.  It’s somewhere in between which leaves a lot of room for margin of error and the silliness of the characters and the situations they get themselves into.

The French seem to have a stranglehold on comedy movies made for more sophisticated adult audiences, which appears to be the case here.  The story directed by Daniele Thompson and written with her son Christopher, revolves around the family Melkowich, led by over-sexed patriarch and aging roué, Aron (Ivry Gitlis) who is in the middle stages of dementia.  His two sons Zef (Eric Elmosnino) and Roni (Kad Merad a Herb Edelman look alike) are polar opposites when it comes to religion, life style, observing, and raising their families, to say nothing of a long time sibling rivalry.  Zef keeps kosher, Roni, a diamond merchant, keeps the high party life on-going.

The film opens with a wedding and a funeral.  Roni and his Italian trophy wife Giovanna (Monica Bellucci) are marrying off their daughter Melita (a gorgeous Clara Ponsot) to fiancé Sam (Max Boubil) at ceremonies taking place in Paris. Meanwhile Zef’s wife Irene (Valerie Bonneton) is killed in an auto accident in New York while crossing the street to buy Zef a pastrami sandwich (I’m not kidding). These two simultaneous events then set the tone for all of the zany hilarity that follows, no matter how improbable or far-fetched it may seem.

The surreal funeral scene takes place in non-secular New York City where Roni joins Zef, a very orthodox, Jewish concert-touring violinist and his beautiful cello-playing daughter Noga (Lou de Laage), who have just concluded a concert at Carnegie Hall.  One simply has to have sense of humor to appreciate these scenes.

Noga’s travel plans are such that she is traveling alone back to France for her cousin’s wedding. Still mourning the loss of her mother, she meets a young man on the AeroStar train (the one that goes from London to Paris under the English channel) on her way to join the family.  Once Noga and Sam’s eyes lock, it’s a case of love at first sight, and Noga seals the event with a passionate kiss, not realizing she has just fallen for Sam, her cousin Melita’s intended.  I always say that if one buys the premise, then one can buy the bits that follow.  Remember, it’s an adult romantic comedy where raging hormones simmer just beneath the skin.  Suffice it to say that anything and everything is possible when romance is in the air.

Far be it for me to spoil some of the comic bits and hilarious situations that follow by saying anything more.  That having been said, one should be prepared for a roller coaster ride of comedy and poignancy, with twists and turns along the way.  But, I will say in the words of the Bard of Avon … “All’s Well, That Ends Well”

“It Happened in Saint-Tropez” is gorgeously photographed by Jean-Marc Fabre along with a stunning production design by Michele Abbe-Vannier.  The film is easy on the eyes, and is well acted.  It’s a light, frothy, tasty French pastry of a movie that produces chuckles and laughs all the while being entertaining in the process.  And there isn’t a calorie in sight.  Enjoy!