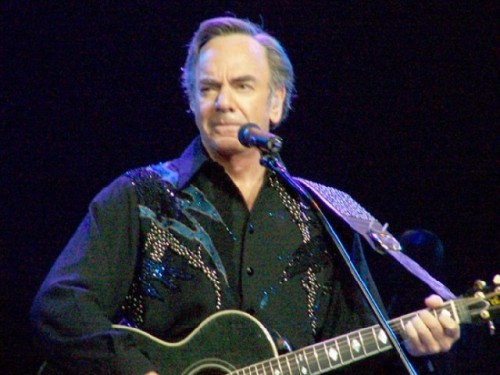 There is absolutely no doubt that Neil Diamond is an iconic singer/songwriter/performer and a genuine Superstar.  But it wasn’t always so.  The documentary film “Neil Diamond: Solitary Man” by a BBC-TV production team directed by Samantha Peters is a very honest and unvarnished exploration of how this somewhat shy and talented young man from Brooklyn, USA, rose from humble beginnings, to the pinnacle of music industry success, ultimately becoming its King in the process.

The source material and the on-camera personality in the documentary film is the man himself.  Diamond has always been a private and a self-effacing person, who likes to be considered as just one of the guys.  But, according to Russ Regan a legendary, former music industry executive, when Diamond performs he never holds back and Regan ought to know.  He was responsible for Diamond’s early song writing and performing successes. Whether his audience is 100 or 100,000 (as was the case in his Australian concert “Hot August Night”) he lives to perform and his glitzy powerhouse shows reflect that performing philosophy.

“Neil Diamond: Solitary Man” chronicles Diamond’s early years growing up in Brooklyn and his initiation into the world of songwriters working in the famous Brill Building, in New York City in the fifties.  He wrote songs for others, but always harbored a desire to become a performer of his own songs.  It’s the same route later traveled by Barry Manilow, who also wrote songs for others first before going solo with his concerts.

Diamond, in this documentary, is refreshingly candid about his career, with a tiny peek into his personal life. But it’s his business life with its up and downs, its disappointments, and perhaps, the questionable choices made in his spectacular career, that everyone wants to know. Ah, the price of stardom and celebrity.   But it’s hard to argue about his choices that have produced over 125 million records worldwide in a career that spans more than five decades.  His music genres cover the spectrum of the American music scene: Pop, rock, folk, country, and soft rock.  Neil Diamond is one of America’s true poetic singer/troubadours, like Woody Guthrie, Pete Seegar (his role model), Bob Dillion, Carole King, James Taylor, Helen Reddy, and John Denver, among others.

Lee Holdridge, the famous American music composer, arranger and conductor has worked with Diamond and Denver, and most music stars over the last two decades.

He shared some of his “Neil experiences” at a special screening in La Jolla, CA during the San Diego Jewish Film Festival.  Holdridge, who appears in the film, said, at the Q & A session following the screening, that when Diamond is preparing an appearance, there is no detail that escapes his directorial eye or his showman’s intuition.  He knows what he wants the audience to see and to hear.  True Superstars have this need to be in charge of their own performances.  Sometimes a vision of a show may fall short of what was expected.  But that doesn’t happen very often.

Now 73 but looking 53, Diamond still performs.  He has said that LA’s Greek Theatre is one of his favorite venues, and holds a special place in his heart.  It’s not surprising.  The Greek Theatre regularly sold out all of Diamond’s performances.  There are a lot of former New Yorkers living in Los Angeles that remember the Brooklyn boy who grew up to become the Jewish Elvis.

This 59 minute film documentary is informative and highly entertaining, with plenty of music, anecdotes by Diamond, as well as other music industry icons, and is chock full of archival performances.  It’s a fitting tribute to one of America’s performing giants.  If you see it being advertised anywhere, make sure you catch it.  You won’t be disappointed.