The Winter's Tale at Old Globe 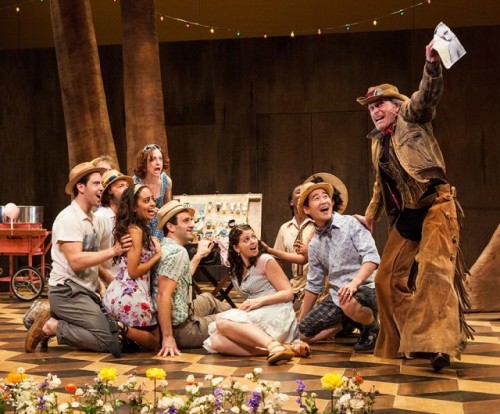 The Winter’s Tale at The Old Globe in San Diego.

Fans of “the Bard” are used to enjoying Shakespeare productions at the Old Globe in the Lowell Davies Outdoor Theatre during the summer months; not in the dead of winter.  Be that as it may, The Globe’s new Artistic Director Barry Edelstein, wanted his favorite Shakespeare play, “The Winter’s Tale” to be his first directorial production – and he wanted to present it inside, in the Globe’s venerable and famous 75 year-old theatre.

I’m so glad he got his way.

The Globe has been fortunate over the last decade to have Shakespearean scholars or experts in the role of Artistic Director selecting and overseeing the Bard’s many plays.  Most recent AD’s answer to the names: Darko Tresnyak, Adrian Noble, and now with the 2014 season underway, current A.D. Barry Edelstein.  Each brought talent, intelligence, experience, and passion to the job.

With “The Winter’s Tale”, Edelstein’s personal vision and theatrical fingerprints are all over this production of loss and redemption.  Although labeled as a comedy, the story is one of complexity, and by today’s linear standards might be considered as one of Shakespeare’s “problem plays” (at least, in it’s construction).  In Shakespeare’s day the plot and construction wasn’t an issue.

The story in short (if there is ever a short version of anything in Shakespeare’s plays), breaks down like this: Once upon a time there were two Kings.  Leontes, the King of Sicila (Billy Campbell), and Polixenes (Paul Michael Valley), the King of Bohemia, who were boyhood friends.  Polixenes decides to visit his old friend Leontes and ends up staying for about nine months.  Prolonged visits among royalty and friends, was quite common in those days, distance being what it was.

In Act One, Leontes’ beautiful wife Hermione (Natacha Roi) is nine months pregnant, but still manages to be an attentive hostess who is charming her husband’s friend, perhaps, a little too much, in the eyes of Leontes.  The tone of the play changes darkly and dramatically when suddenly, Leontes fills a farewell party for Polixenes with accusations of infidelity, disbelief and denials.  Paranoia and jealousy change the lives of Leontes, Polixenes, and Hermione; affecting both royal families.

What begins as a visit of two best friends ends on a rage-filled note by Leontes, who banishes his guiltless and innocent wife, disowns and abandons his-new born daughter Perdita, to a death at the hands of a trusted courtier (who fails to do the deed), and Leontes then retreats into a life of introspection and depression.  The “loss leitmotif” has thus been fulfilled.

In Act Two, the tone of the play changes again. This time 180 degrees.  It’s sixteen years later.  Polixenes is safely back in Bohemia and far from the troubling issues back in Sicilia.  His son Florizel (A.Z. Kelsey), meets and falls in love with a shepherd’s daughter (actually it is Perdita, who is unaware of her royal lineage) and the two young lovers plan the marriage they both know Polixenes will not approve.   Bohemia is a land where people laugh and seem to enjoy life.  It’s full of energy and is sometimes a little silly with the situations and the costumes the characters find themselves in.

The “redemption leitmotif”, however, takes place over the passage of time; combined with a “peace treaty” brokered by the friends of both Kings: Paulina (Angel Desai) in Scilia, and Camillo (Cornell Womack) in Bohemia, in the hope that the two houses, in the end, will be reunited.  In the meantime there is heck of a lot of talking going on, and many plot-point dots will be connected.  Remember, I said very little is short or brief in Shakespeare’s plays. But the wait is always worth it.

In the last scenes of this tragi-comedy, the “miracle” moment (the English version of the Greek’s  deus ex machina) is a mesmerizing, spell-binding, piece of theatricality that needs to be seen and experienced with an audience.  For over one minute, one could hear a pin drop on opening night when director Edelstein revealed his piece de resistance moment.  It was absolutely sublime.

The large and energetic cast is solid in their performances, but there are always standout performances and they come from: Billy Campbell as the tortured Leontes; Paul Michael Valley as Polixenes; Cornell Womack as Camillo; Maya Kazan as Perdita; Angel Desaik as Paulina; Mark Nelson as Antigonus; Brendan Spieth as the Clown; Paul Kandel as Autolycus and as Archidamus; and Natacha  Roi who is oh so warm as Hermione.

The technical department at The Old Globe has few equals when it comes to creating magic from backstage.  The creative team led by Edelstein includes:  Scenic Designer Winston Chin, who provided a visually stunning, yet sleek and expansive playing area for the actors to perform their magic. Lighting Designer Russell H. Champa painted the stage with just the right amount light not only to heighten and enhance moods, but also to allow the costumes of Judith Dolan to be seen and fully appreciated.  The sound design by Fitz Patton complements the original music of Michael Torke, and Musical Director Taylor Peckham.

Barry Edelstein’s masterful directorial debut at the Old Globe was everything one was hoping it would be.

The Globe begins a new era under the intelligent, knowledgeable, and the highly articulate leadership of its new Artistic Director.  Long live the King!