A Play About Power! 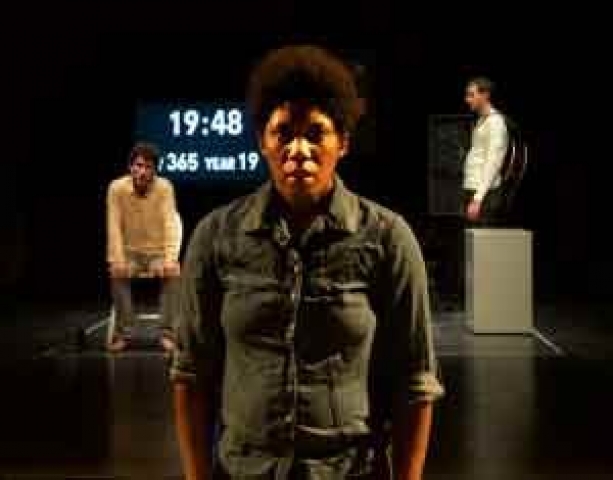 As the lights dim and the performance of Jupiter begins, the fellow (Camuzeaux) playing a string instrument stage right suddenly begins to narrate the tale.  While two on-stage clocks count the amount of power (in kilowatts) being used by the performance and the “days” that have passed in the story. A solitary figure (Pickard) takes the stark, elevated stage – clearly a pod of some sort, with only a ham radio, a Go board, a chair and a round portal window. In his hand is a clear thermos from which – without enjoyment – he occasionally sips a red, life-sustaining liquid.

This is “the man at the switch,” a fellow who somehow (this part is never explained) has managed to make all fossil fuels disappear permanently from Earth and debunked for Jupiter. This entails leaving his fellow men to panic, despair, kill and struggle to survive without cell phones, cars, elevators – and all the energy-guzzling “stuff” we are so used to. The narrator explains all this from “his” perspective as a young man in NYC, desperate to get back home to his parents on Long Island, wondering about the well-being of his friends and his sister – who is traveling, whereabouts unknown.

Suddenly a woman’s (Stephens) wail is heard from the central aisle. The spokesperson for all humankind, she and the “overlord” engage in a series of dialogs over the course of many, many years, as anger and despair turn to resilience and defiance, with the overlord all the while insisting that he has used his one-time “power” for the ultimate good of humanity – which, with its misplaced priorities and wanton squander of Earth’s resources – was headed towards inevitable destruction. As the play and time progress, the question is: Who is really in “power?’ What does “power” really mean? And what IS the right path for us: To start all over, or to use our technology to reverse the dangerous path of resource depletion that we clearly are on today?

Jupiter’s goal is not to provide an ultimate answer, but rather, to start a dialog and provoke the audience into making environmental issues a priority. It succeeds, not just with thought-provoking dialog and drama, but also by using popular song (David Bowie’s “Changes”) and audience participation. Midway through the play, Stephens invites someone from the audience to come on stage and sing karaoke. That brave participant (who I am still not convinced wasn’t a “plant” – although she has no credit in the program!) continues to be involved in the remainder of the performance!

Make no mistake, this team has the environmental "cred" to demand that the audience hear their message.  Camuzeaux is not only a talented singer, musician and actor – he is also a Senior Economic Analyst at The Environmental Defense Fund. The performance I attended was followed by a talk-back session with Camuzeaux, Pickard, and Michael Gerrard, a professor of Climate Law at Columbia University, who was a consultant for the production. In addition, Superhero Clubhouse created a “lab” with Dr. Gavin Schmidt, Director of NASA’s Goddard Institute for Space Studies.It is a bimonthly workshop in which environmental scientists and theater artists collaborate on science-based theater performances about pressing environmental issues. So go, enjoy, and learn!

Jupiter is the seventh of nine Planet Plays, which Superhero Clubhouse calls “a new mythology for our changing world.”

Co-created by Camuzeaux, Pickard, Lani Fu, Simon Adinia Hanukai and Megan McLain, it was directed by Hanukai, with set and lighting design by David Bengali and Anshuman Bhatia, sound design by Eva von Schweinitz, and costume design by Angela Hamer. JUPITER runs through February 28 at La MaMa Theatre, 74A East 4th St., NYC. Tickets are available by calling 646-430-5374 or online at www.lamama.org