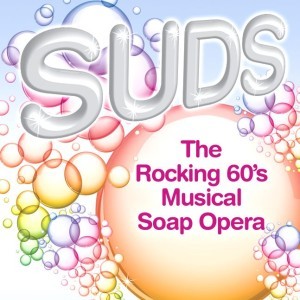 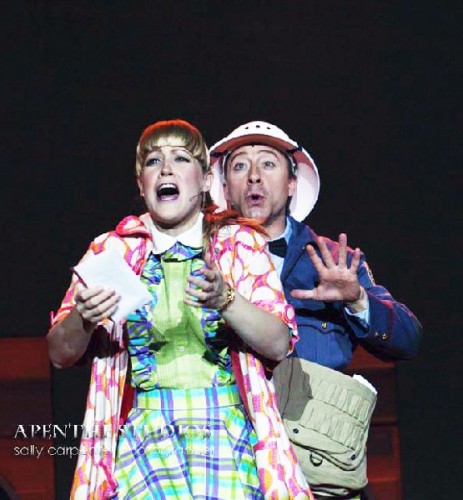 A frothy evening of musical theatre. 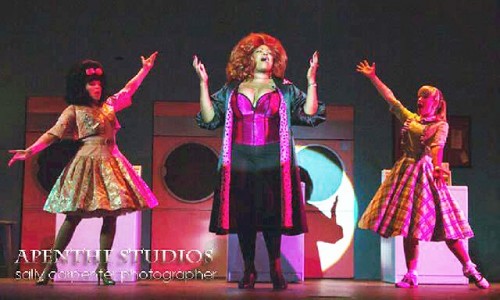 Working up a lather.

If you have a hankering for the music and the nostalgia of the 60s, then the stage of the Annenberg Theatre, in Palm Springs, has to be the place for you this week.  The songs and the cultural touchstones that baby-boomers fondly remember is brilliantly and faithfully recreated in the Coyote StageWorks musical production “SUDS: The Rocking 60s Musical Soap Opera”.  Created by co-authors Melida Gilb, Steve Gunderson, and Bryan Scott this extremely entertaining and creatively directed show by David Engel, was a veritable walk down memory lane that was not to be missed. (It closed on February 17)

“SUDS” is a sweet and tender look backward in time when America was a gentler and kinder society.  Gilb and Gunderson are writers who always infuse a great sense of comedy and poignancy into their characters and to their stage productions.  They also wrote “The Great American Trailer Park Musical” which I saw two years ago at San Diego Repertory Theatre.

The Coyote StageWorks production at the Annenberg Theatre in Palm Springs, directed by the very talented actor/director David Engel, faithfully recreates the era of the 1960’s thanks to the brilliant performances of its four cast members, and the songs that transport the audience back in time when life was a heck of lot simpler.  The baby-boomer generation was not only struggling to find love, but also trying to find its way in a changing world.  The songs of:  Burt Bacharach; John Lennon; Paul McCartney; Johnny Rivers; Otis Redding; and even Sandra Dee; among many, many other blockbusting songs from that era provide the fuel that drives this high-octane production.  The stage literally jumps with the toe-tapping rhythms and songs that are chock full of such memory favorites from Dusty Springfield, The Supremes, Dionne Warwick, Aretha Franklin, and Jack Jones, and many, many others.

“SUDS”: The Rocking 60’s Musical Soap Opera” is blessed with four absolutely first- rate performers:  Samantha Mills as Cindy, a forlorn young woman who works in a neighborhood Laundromat, who believes love will never find her again after being jilted by her pen-pal (I don’t think finding love again is a problem if one looks like Samantha Mills –she’s a knock-out).  Bets Malone as Dee Dee, a guardian angel sent to help Cindy find love again is a pretty snappy number herself.

The absolutely stunning and dynamic singer/actor Gwen Stuart as Marge, a second guardian angel sent to help Cindy, takes command of the stage whenever she’s on it.  Her pitch-perfect voice and vocal style is right out of the 60’s.  If one is a Broadway theatre fan one might recognize Gwen as one the original NY cast members of “Rent” a few years back.  The only male in the cast is multi-talented singer, actor, and dancer Larry Raben.  Raben is a pure delight to watch.  He plays all of the male characters, plus a turn ala Dustin Hoffman in “Tootsie”, that is hilarious and right on the money.

Coyote StageWorks producer Chuck Yates has come up with another terrific production at their home theatre, The Annenberg.   The set design by Michael Peters almost wishes you had brought your laundry with you to the theatre.  The set is that realistic.  Phil Murphy’s lighting design is correctly set for Full Up.  It’s a show that the audience wants to see and explore and be able to peer into every nook and cranny of that lovely set.  Murphy’s design hit’s the mark, while the ever efficient and reliable Jill Gold performs stage manager duties with her usual skill and expertise.

This production is a winning show that will please the entire family.  If you aren’t tapping your knees and your feet while enjoying this show, then you had better make an appointment to see your doctor – you ain’t alive!