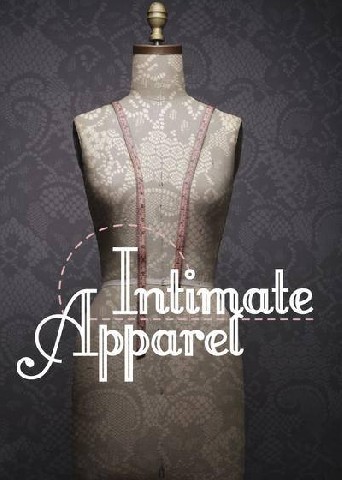 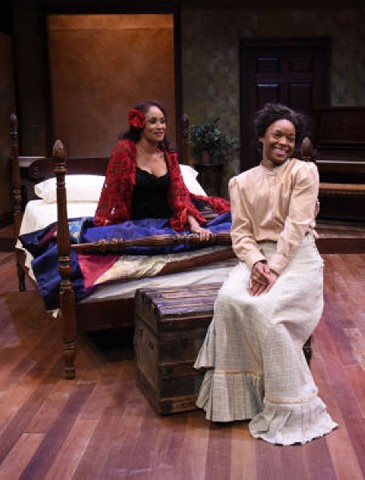 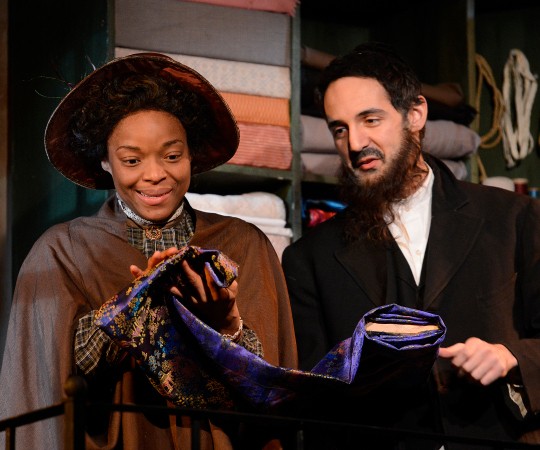 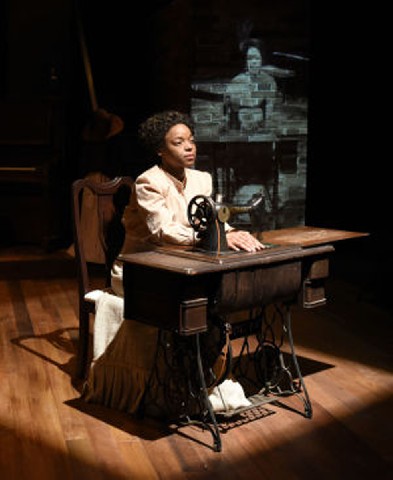 In all of its permutations, the American Dream is the opportunity for individuals to achieve prosperity through hard work and eventually achieve it. Failure or at least partial achievement is certainly more common than total fulfillment. Telling a story about it is often full of cliches and expected outcomes.

When this journey of aspiration is told with grace, dignity and even poetry, it is a wonderful shared experience. Assisted by superb staging and talented actors, Intimate Apparel now being performed at the Lyric Stage Company is a compelling expression of this journey in the form of a brilliant theatrical event.

Life at the economic bottom rung of American society has always been a struggle. No more so than perhaps at the dawn of the 20th Century in metropolitan centers. Opportunity was certainly there for some, but not always focused for others.

Set in 1905, Pulitzer-prize winning Playwright Lynn Nottage has created a brilliantly crafted evocation of the time, place and spirit of the period in a very believable fictionalized story of the pain and striving of a talented Southern black woman, shy but steadfast Esther Mills, who literally walked north to New York City to find her personal value.

The play won the 2004 Steinberg New Play Award and was inspired by a period snapshot of a Negro seamstress.  The character, wonderfully played by Lindsey McWhorter as Esther, is a plain Jane single 35 year old who's natural humility is complicated by both society's sexism and racism. This is underscored by her social conditioning that both hinders and surprisingly helps her to succeed.

Esther has a special talent as a seamstress who can create beautiful undergarments including corsets, teddies and camisoles. She plies her elegant trade on an old-fashioned sewing machine in her room in an all-female boarding house. Her clients include both Fifth Avenue rich white ladies and black prostitutes in New York's raunchy Tenderloin District.

Though extremely sensible and logical in her work ethic, she fantasizes about both love and success. Her dream is to own/operate a special beauty parlor in which black women would be pampered similar to white women. Her story is the heart of Nottage's play. But like beautiful embroidery, other story threads are woven in and out of the narrative fabric as well.

Esther's older confident is her landlady Mrs. Dickson. She is played magnificently with a feisty, sagaciousness by Cheryl D. Singleton. Her backstory informs her character. Amanda Ruggiero plays a very lonely, unloved Mrs. Van Buren, the rich bejeweled white customer whose distant husband blames her for their childlessness.

Kris Sidberry as Mayme plays her as a blunt, earthy sexy African-American prostitute. Her piano playing, gin swigging and sex for fee life is the antithesis of Esther's. Unlike Esther, each of the other three women needed men but without any real romance.

Esther dreams of romance, and she actually finds it. Her romance begins with a lonely hearts letter from a Barbados-born Panama Canal laborer. The letters develop into a long distance betrothal. The three other women interpret the correspondence in very different ways. George Armstrong, appears to be a poetic, polite gentleman sweating out his stark living digging the Panama Canal. She eventually marries George, but his rough reality is very different than his polite promise.

A marvelously portrayed character is the Ultra-Orthodox Jewish fabric purveyor Mr. Marks performed by Nael Nacer. With his wonderfully Yiddish-accented old world manners, this Romanian-born immigrant shares with Esther a love for beautiful fabric. His prescriptive life is a haunting mystery to Esther. Though taboo, she is attracted to him as he seems to be to her. Among a very good cast, Mr. Nacer, Cheryl D. Singleton and Lindsey McWhorter give outstanding performances.

Wrestling with such a meaningful and expansive subject as the American Dream and transcending race, religion and gender, Playwright Lynn Nottage has created a minor masterpiece with Intimate Apparel. This Lyric Stage Company production is a high point of Boston's theatre season.
Back to Theatre Section Home