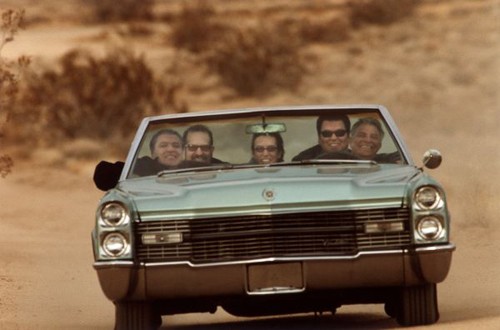 Last spotted in North Adams at MASS MoCA's opening weekend celebration in May 1999, Los Lobos returns to the Tunnel City to pack MASS MoCA's Hunter Center on Thursday, April 5, at 8 PM for a concert sponsored by Berkshire Gas. Rolling Stone Magazine says, "With the exception of U2, no other band has stayed on top of its game like Los Lobos", and they are touring in support of their acclaimed new album - their first in four years - Tin Can Trust.

Their debut album three decades ago was Just Another Band from East L.A., but fans know that Los Lobos isn't "just another" anything, but a band that has consistently evolved artistically while never losing sight of its humble roots. With its unique mix of rock, blues, Tex-Mex, folk and traditional Spanish and Mexican music, Los Lobos has created some of America's most inventive and inspiring music, notching numerous #1 singles, three Grammys and millions of albums sold along the way. Best known for covers of the Ritchie Valens classics, "La Bamba" and "Come On, Let's Go," Los Lobos has assembled a body of work diverse enough to captivate fans worldwide. All About Jazz raved, "The genius of Los Lobos resides in their innate ability to find the redemptive power of music, no matter the style they choose to play."

In 1987 the band was tapped to cover "La Bamba," the Mexican folk standard that had been transformed into a rock and roll classic in 1958 when it was recorded by the ill-fated 17-year-old Ritchie Valens. Valens, the first Chicano rock star, was catapulted to legendary status the following year when he died in a plane crash along with Buddy Holly and the Big Bopper. Los Lobos was the natural choice to remake his signature hit for the biopic of the same name. That remake sprang to number one on the charts, cementing Los Lobos' reputation.

A rare example of longevity in a volatile music world that stresses style over substance, Los Lobos' lineup has remained uninterrupted since 1984, when saxophonist/keyboardist Steve Berlin joined original members Louie Perez (drums/guitars/vocals), vocalist Cesar Rosas, bass player Conrad Lozano, and multi-instrumentalist David Hidalgo, each of whom had been with the band since the beginning in 1973.

"This is what happens when five guys create a magical sound, then stick together for 30 years to see how far it can take them," wrote Rolling Stone, and indeed, Los Lobos is a band that continually redefines itself and expands its scope with each passing year, while never losing sight of where it came from. Through sheer camaraderie and respect for one another's musicality, they've continued to explore who Los Lobos is and what they have to offer, without succumbing to the burnout that plagues so many other bands that stick it out for any considerable length of time.

"There's this thing that still happens, this musical thing," says Pérez. "But if you took everything away, even the music, you'd still end up with four guys who were friends and hung out and grew up in the same neighborhood. And you can't take that friendship away from us."

"We're long haul guys," says Berlin. "If you're in it for the long haul, it makes staying together a lot easier. It's a challenge, but the thing I'm most proud of is that we've never rested on our laurels. We keep trying to make every record feel like the first one and try to do the best we can and not tread on territory we have already trod on. What you hear is exactly what we wanted to do."

Los Lobos will perform in MASS MoCA's Hunter Center on Thursday, April 5, at 8 PM in a "standing room only" show.  Drinks from the MASS MoCA bar, as well as dinner and snacks from Lickety Split, are available before and during the show.  Tickets for the performance are $29 in advance and $35 day of show. MASS MoCA members receive a 10% discount. Tickets are available through the MASS MoCA Box Office located off Marshall Street in North Adams, open from 11AM - 5 PM, closed Tuesdays. Tickets can also be charged by phone by calling 413.662.2111 during Box Office hours or purchased online at www.massmoca.org.