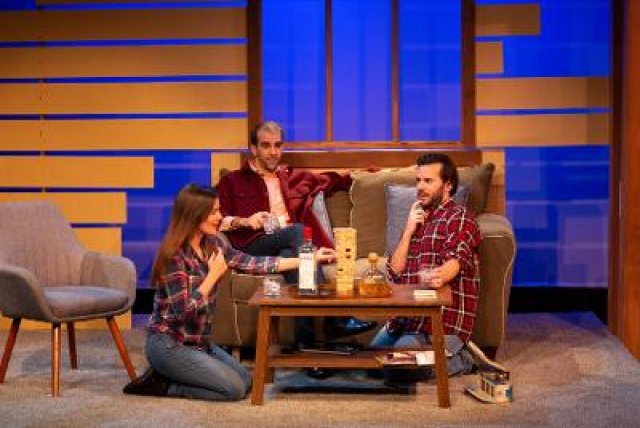 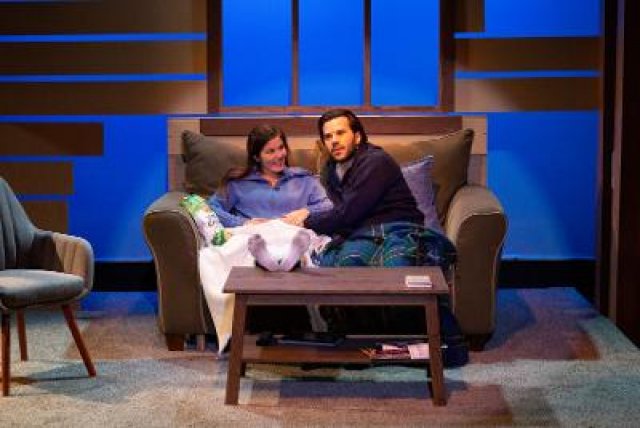 If you couldn’t have children the conventional way, how far would you go to form and raise a family to which you truly felt connected? That is a question you might ponder after witnessing the Wilton Manors-based professional, nonprofit Island City Stage’s (ICS’) strong world premiere production of Hannah Manikowski’s taut, compelling, relatable play, Compensation.

The piece, which you can view online through Feb. 28, takes place during the present, “somewhere in the Midwest,” according to the program.

Tara is a woman in her 20’s who is searching for meaning and connection. Meanwhile, Elliot and Gabriel are a gay, well-to-do couple in their 30’s. Several of their friends have had children, and they wish to as well. So, they seek the services of an online surrogacy agency, through which they meet Tara. All three hook up, and agree that Tara will have the baby. And Elliot’s sister has donated her eggs for the procedure.

But the entire process doesn’t unfold that smoothly. The characters’ complex feelings force them to think about what they’re doing. Eventually, these feelings lead to a heated exchange — and a revelation from Tara that could derail everything.

Early on, in the playwright’s words, Compensation was a “dialogue about the complex systems that coerce women into outsourcing their bodies for income, the ethical implications of couples purchasing access to those bodies, and the profound yearning for family that drives these people to entangle themselves in these systems in the first place.”

Now, the play’s clear focus is that profound yearning for family and connection.

Fortunately, Compensation is mostly free of jargon and other technicalities. Indeed, the piece is a human story featuring characters to whom we can relate. And in her play, Manikowski, who doesn’t judge her characters, demonstrates a lively writing style that keeps us engaged with the action onstage.

“The true compensation…it’s…spiritual,” Tara says, regarding why she is willing to carry someone else’s baby. “I come from a single parent household. Just me and my mom. I was kind of…removed…growing up? An island unto myself. But I’d like to be…less like that. I think.

Even though Tara doesn’t want her own child, “to recognize yourself as a vessel for life is… There’s this profound and terrifying potential to impact the course of someone else’s entire world,” she says.

Each of the three characters in the play yearns for something. Such intense desire, coupled with obstacles the characters face, produce strong drama.

“I want this more than I know how to tell you,” Elliot tells Tara at one point, referring to a child. But, “there are so many variables that are outside of my control. I  just have to throw my hands up and give it to God – or to the universe, or… whatever’s out there, up there.”

The characters’ feelings are complex enough that they sometimes find it difficult to describe with words. Therefore, Compensation could work as a musical.

As it stands now, the play is a lean, focused, heartfelt, and sometimes funny piece. While we learn about Tara and her mother’s strained relationship (mom is an off-stage character; we only hear her voice), this information doesn’t distract. Instead, it reinforces Tara’s need to feel useful and connect. Elliot and Gabriel also crave connection.

“I love you, ma,” Gabriel tells his mother over the phone. “Looking forward to the next time I can wrap you up in a hug.”

Surely, in the midst of a pandemic, we can relate to such a comment. And, mostly, we can relate to Gabriel, whom Stephen Kaiser credibly plays as a calm and reserved but loving and sincere man. Clearly, he’s someone you do not want to hurt, or even say no to.

“It’s like kicking a puppy,” Tara says, likening turning Gabriel down with animal abuse. Even when Gabriel disapproves of something Elliot does or says, Kaiser ensures that Gabriel does not come across as mean or demanding.

In fact, we might be able to relate to Gabriel even more if Manikowski further developed him. For instance, we never learn what he does for a living.

What we know about Elliot is that he’s endlessly talkative, impulsive, loving, and joyful. To his credit, Israel Vinas nails these traits. His Elliot is someone whose energy and charisma makes us want to remain in his presence.

Gaby Tortoledo also shines as Tara. Specifically, the performer lends the young, inexperienced character a convincing naivete. It makes Tara seem like a green, impulsive young woman. Also, Tortoledo’s Tara is a bundle of insecurity and nervous energy. It makes sense that she is uptight. Indeed, Tara is not only carrying someone else’s child, but a secret that she’s trying hard not to spill. Portraying a nervous character can be a tough task. A performer must convincingly convey nerves without suggesting stage fright. But Tortoledo proves up to the task. In addition, she plays strong emotions with conviction without seeming to force them.

As a pair, Kaiser (Gabriel) and Vinas (Elliot) are believable as a long, loving, and close couple (in a physical sense, too).

Under Roy Abbott’s sensitive and detailed direction, ICS’ production never comes across as sentimental. Also, the production, which Abbott paces well, possesses an impressively naturalistic quality. The performers speak in a relaxed, soft manner that might call to mind film acting. Fortunately, Island City Stage’s playing space is intimate enough that it’s easy to hear and understand the performers. They don’t need to wear microphones, which didn’t seem to work anyway during the reviewed performance.

Ardean Landhuis’ realistic lighting design reinforces mood and offers emphasis when needed. Landhuis, who also designed the set, has created a roomy playing space. The cozy-looking set is detailed without calling attention to itself. Ditto for W. Emil White’s character- and situation-appropriate costumes.

Compensation could use work. For instance, we might benefit from exposition at the top of the play. It can seem confusing as to where the characters are and exactly what they’re doing. Also, it might help to include Tara’s mother as a character in the flesh rather than merely a voice. We might be able to identify with her more if we see her in her surroundings. With that aside, Compensation is a taut play of the moment. Indeed, many in the LGBTQ+ community are looking to start a family with children. For this reason and more, Manikowski’s piece deserves a long theatrical life.