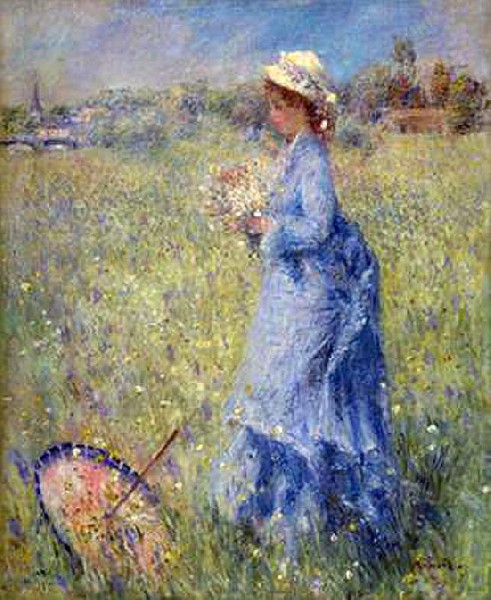 Sterling and Francine Clark, who were among the great collectors of their generation, had a particular passion for the French Impressionist Pierre Auguste Renoir. Of the renowned Impressionists works in the Clark Art Institute the greatest depth is in paintings by Renoir. Their zeal for Renoir was exceeded only by enthusiasm for the American artist, Winslow Homer.

The announcement of the intended sale of the Renoir, estimated to be worth $15 million, did not come from the museum. It was issued in the press release which appears below from TEFAF Maastricht, the world’s most influential art and antiques fair.

We spoke with Clark curator Richard Rand about the sale of the Renoir and will file a separate report on that interview.

Helvoirt, March 23rd 2011 - A major work by Pierre-Auguste Renoir from the pioneering early days of Impressionism is to be offered for sale for US$15 million by the leading international gallery Dickinson at TEFAF Maastricht, the world’s most influential art and antiques fair. Femme cueillant des Fleurs (Woman picking flowers) depicts Camille Monet, the first wife of Renoir’s fellow Impressionist Claude Monet, who died tragically young. It is being sold through Dickinson by the Sterling and Francine Clark Art Institute in the United States in order to strengthen other areas of its collection.  TEFAF (The European Fine Art Fair) will be held at the MECC (Maastricht Exhibition and Congress Centre) in Maastricht in the southern Netherlands from 18-27 March 2011.

Important early Impressionist paintings are increasingly rare on the market and Femme cueillant des Fleurs dates from a pivotal period. It also serves as a poignant reminder of a story of fierce jealousy involving Monet’s first and second wives. Camille Doncieux was 18 years old when Monet met her in 1865 and she soon became his lover and was the model for a number of his works in these early years.  Monet’s father refused to accept her into the family because of her humble origins but despite this the couple married in 1870.

The lifelong friendship between Monet and Renoir was at its closest between 1866 and 1875 and the two men often painted together, setting up their easels side by side. Camille was depicted in a number of their paintings including Femme cueillant des Fleurs, which dates from this important period in the development of Impressionism. She is shown standing in a field near St Cloud, outside Paris, clutching a bunch of flowers which she has just picked. She has momentarily cast her parasol aside in the grass so that she can hold the flowers. A year after Renoir painted this picture, Camille became ill and in 1879 she died aged 32 , her already poor health worsened by the recent birth of her second son Michel.

Monet’s second wife Alice Hoschedé was a jealous woman who destroyed all the material that she could find relating to Camille. Only one photograph (below)survived the purge. Taken in Holland in 1871, it was preserved in a private collection of which Alice was unaware. It is perhaps appropriate that this fascinating and enigmatic figure in the history of Impressionism is known to us almost entirely through the paintings for which she posed.

Femme cueillant des Fleurs is being sold by the Sterling and Francine Clark Art Institute, in Williamstown, Massachusetts. The work, originally purchased by Sterling Clark from Durand-Ruel in 1933, is one of many by Renoir in the Clark’s collection. Sterling Clark began his lifelong engagement with Renoir’s art in 1916 and, for the next forty years, Clark and his French wife Francine cultivated their shared fascination with the artist’s work, creating one of the greatest private collections of paintings by Renoir in the United States. The Clark owns 32 other works by Renoir. Proceeds from the sale of Femme ceuillent des Fleurs will be used solely for new acquisitions, allowing the Clark to strengthen other areas of its collection where the holdings are not as comprehensive.

TEFAF 2011 will have some 260 exhibitors from 16 countries in nine sections. In addition to exhibitors from established centres of the art and antiques market in Europe and North America, the 2011 Fair will include dealers from Korea, Uruguay and Argentina.

Art, more than an Asset

TEFAF shares its view of art as more than an asset with its principal sponsor, AXA Art. Their partnership provides art collectors with unique expertise covering the full range of risk prevention, conservation, recovery and restoration, to enable them to maintain their collections in the best possible condition. www.axa-art.com