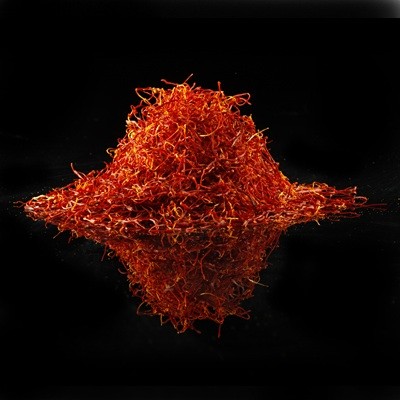 Spanish saffron is the essential ingredient in paella. 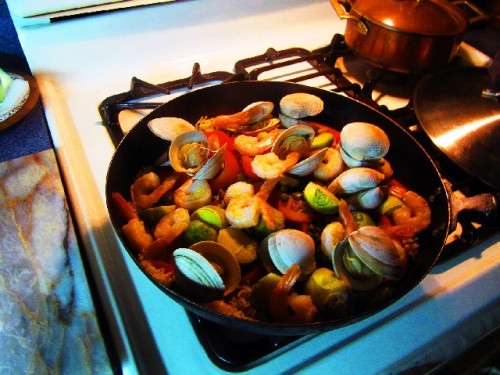 Our not exactly traditional but awesome version of paella. 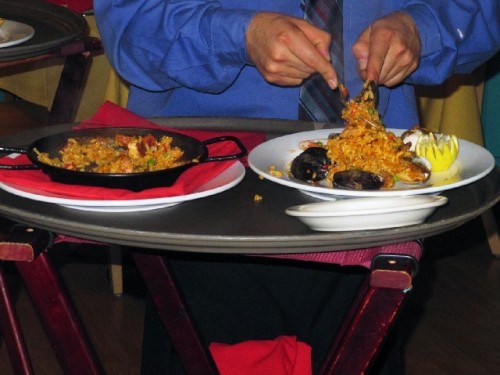 The recent disappointment at Coyote Flaco. 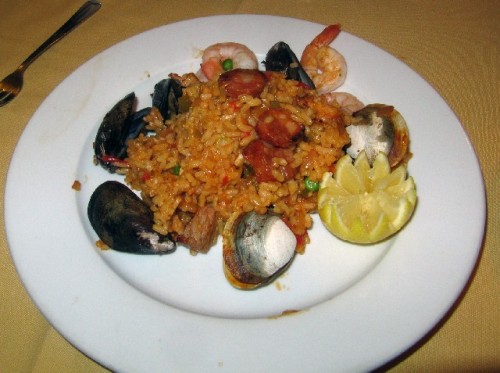 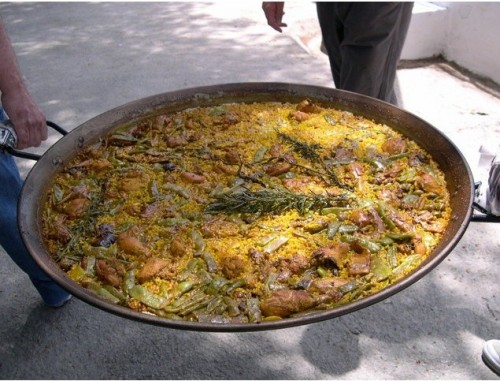 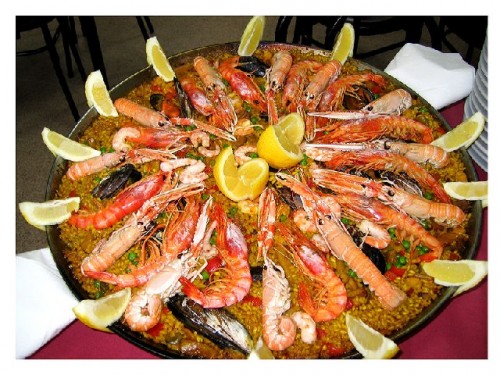 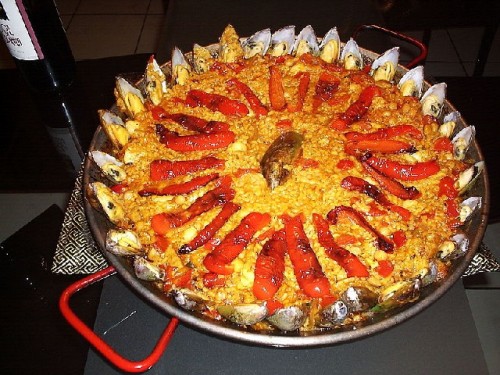 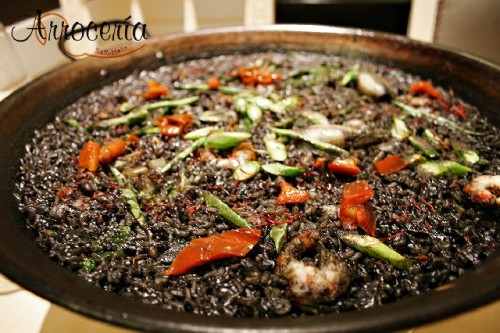 The arroz negro is similarly prepared but not regarded as a paella. 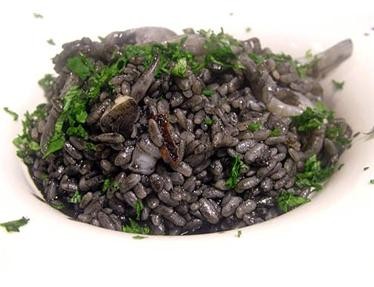 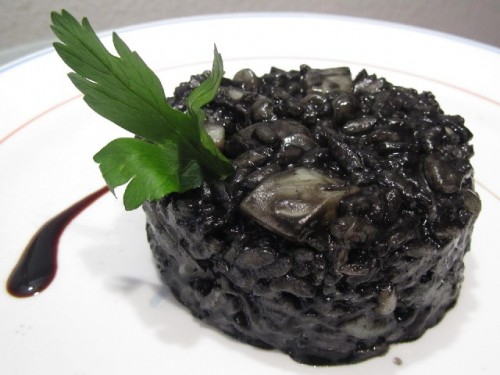 The Italian risotto prepared with octopus ink to flavor and color the rice.

We don’t get to see them often. But it is vacation week so he and Rachel were in the Berkshires for a bit of R&R.

The emails went back and forth. Your place or ours?

His meals are always so awesome that it raises the bar.

Pasta is a no brainer.

Sicilians growing up in the kitchen watching Mom make the sauce.

Or gravy as they called it on the Sopranos.

But there is a hitch.

Seems that Robert is wheat intolerant.

We have served it to him in the past with consequences.

During their holiday pizza party he made wheat and gluten free pies.

But rice is OK.

So I went with my version of paella.

We’ve had the best in Spain.

Perhaps the most memorable in Barcelona.

For lunch in a little café not far from the hard to find Picasso Museum.

The paella was great.

But more memorable was the elderly couple that dined in absolute silence.

They exchanged not a word.

Seemed to be tolerating more than enjoying each other.

We wondered whether with time we would run out of things to say to each other.

Another incredible paella was served to our traveling group of 25 during a school trip.

Stopping at a country inn the men brought out a huge flat pan that had been prepared outside over charcoal.

We each enjoyed one incredible serving.

Sometimes in Spain you can get tricked.

There’s a commercial version, frozen, that they throw under the grill.

Typically it’s more scorched than cooked. The mussels and shrimps are embalmed.

The most memorable was during our last night in Spain.

In walking distance of the hotel was an array of restaurants.

We decided to splurge on the upscale one that specialized in seafood.

I ordered the Arroz- Negro which is technically not a paella but is prepared in a similar manner.

It is a dish of seafood and rice cooked in the ink of squid or octopus.

What an incredibly subtle and smooth flavor.

It reminded me of the Risotto al nero di sepia con vincoli that I had enjoyed during lunch in Sienna when I was a graduate student touring Italy.

Never have lunch in Italy if you are in a hurry.

The dish took forever to arrive and I had to take the train back to Florence.

So I didn’t see as much of Sienna as I would have liked.

But it was worth the wait.

That risotto, even after all these years, lingers in my archetype of foodie memory.

There are some meals you never ever forget.

We have made versions of paella over the years.

I have never mastered the Spanish technique of Paella that has a layer of toasted rice at the bottom of the pan called socarrat in Spain. The toasted rice develops on its own if the paella is cooked over a burner or open fire. If cooked in an oven, however, it will not. To correct this, place the paellera over a high flame while listening to the rice toast at the bottom of the pan.

My attempts have resulted in burnt rice.

Even when using an authentic paellera.

The trick is to keep the seafood moist and succulent and the rice tender, flakey and separated.

I have tried baking in the oven and finishing on the stove top with mixed results.

There is the question of covering or not.

The Spanish cook uncovered adding water as it evaporates.

Then there are the too common experiences of ordering paella in restaurants that’s not even close.

Just like that so called authentic Spanish restaurant in Montreal.

Top of the line and super expensive saffron is essential to paella.

Anything less is a fraud.

We bought an ounce at Atlantic Spice in Truro during a visit to P’Town.

Sweetipie bought me an z for my birthday a couple of years back.

It’s an amazing place if you have never been there.

A Google search found a similar tin of Spanish saffron for $75.

You use a generous pinch in a paella so an ounce lasts for a long time.

Sometimes we use it to flavor rice.

For our recent dinner party I decided to go with a seafood paella.

This time without the andouille sausage that makes it more spicy like a jambalaya.

There are purist versions of paella which originates in Valancia.

You must have rice and saffron but other than that knock yourself out.

Clean out the refrigerator. Throw in the left over chicken, sausage, ham whatever.

This time I focused on shrimp and little neck clams.

Big Y offers two for one. So I bought two bags of jumbo cooked shrimp for $18 and used one. Then a pound of little necks for $5.99. That was just right for four people.

Because you want a lot of ingredients which can be hard to fit into the deep frying pan we use Sweetie suggested the Joyce Chen wok. It’s one of our favorite kitchen accessories. So versatile. Like a flat wok, no ring necessary, with a handle. I oil it after every use.

It proved to work perfectly. Particularly with the tight fitting lid that Sweetiepie found at Sanford and Kid for seventy-five cents.

Another trick we learned from our Indian friend Jay is to wash and drain the basmati rice. That keeps the rice from sticking and clumping. I used two cups of rice and after washing used two and a half cups of water.

In general paella calls for short grain rice. I’ve used Uncle Ben’s. It’s fine. You can use different rice but quality is essential. We really like the basmati.

Then added the saffron. A nice generous pinch.

Into the wok/pan I added my ingredients.

This time in addition to the shrimp and clams: spicy pitted olives, marinated artichokes, Brussels sprouts split in half (they were a huge hit), rings of fresh red pepper (or yellow and orange you want to get color in the dish as well as flavor). This time I added capers which Robert really liked. But I left out the frozen peas which I usually add.

A half hour before guests arrived, I put the pan over high heat and watched until it came to a boil. Then I covered it at low flame. It was perfect in just a half hour.

Other than that, it was awesome. My best ever. The rice was perfect and the seafood fresh and juicy. The little necks in particular earned raves. Next time I will double the recipe to two pounds.

The ladies enjoyed a sensible portion. I had seconds and Robert had thirds.

We also enjoyed his fabulous salad and inventive apple desert. Think apple crisp but totally out of the box.

That night in my dreams I was in foodie heaven.