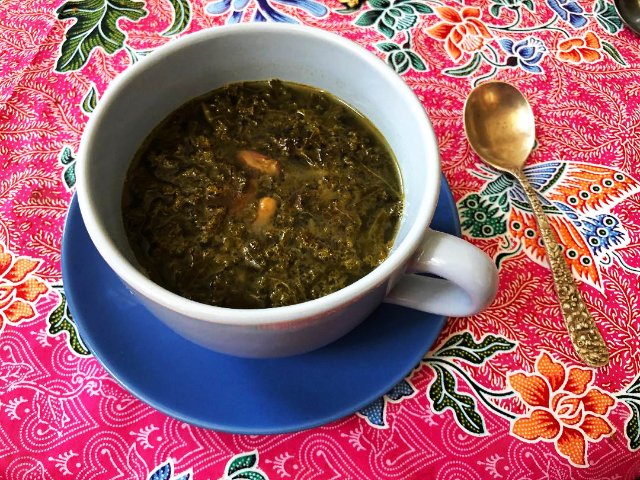 Back in the day, when I visited Provincetown, that meant hearty Portuguese Kale Soup.

The go-to destination was a diner on Shankpainter Road. It’s where locals went. With the advantage of accessible parking.

The diner is long gone and with it fewer options for affordable ethnic dining. You can, to be sure, still order the Provincetown staple. But, for more money, and less authenticity in upscale restaurants.

How I miss that unpretentious eatery with stools at the counter for a cheap, hearty bowl of kale soup.

Since then I have made it at home, generally in winter.

Recently, I made a big batch in a large pot, enough for several days.

The first night, we enjoyed it for dinner and gave some to our neighbors Dawn and Dez.

Because of the sausage I used chorizo from Guido’s, and Ukranian from Pittsfield, the soup proved to be tangy, hot and spicy. A bit too much so for Astrid but it seems, just right for Dawn and Dez. They wanted the recipe so here goes.

The standard sausage to use is linguica which is readily available at our local Big Y. For a more spicy soup try andouille. If I use linguica, at the table, I might add fresh ground pepper or dashes of hot sauce. This time the soup was more than adequately spicy.

The hole in a wall Maria’s European Delights (146 North St Pittsfield, MA 01201) is a must stop for Polish and Ukrainian sausage and sauerkraut. There are many varieties of sausage and cold cuts to choose from. Maria will offer samples when asked. The store is well stocked with traditional jars of vegetables. She travels to Brooklyn each week to get the authentic sausage.

One of our go to meals is sausage cooked with wine or beer, sauerkraut and tarragon. The Polish sauerkraut is sweeter and less acidic than German and American versions. I usually get several jars. A must for this recipe is smoked pork chops from Guido’s. When cooked in this manner it is tender and tastes like ham. They are large and generally we split one. The pot also includes sausage, preferably from Maria’s

Cleaning up after the meal, what was left in the large pot was enough to fill a smaller one. It’s the one that Astrid manages to fit into the refrigerator, which takes some masterful shifting around. Our fridge and freezer always seems to be maxed out.

With a blizzard coming we were well stocked. Having a big pot of soup meant easy and convenient dinners for several days.

While avoiding the spicy sausage Astrid agreed that the soup had wonderful flavor. After a couple of meals of it, however, she plans to cook tonight. Then tomorrow I’m roasting a turkey breast for Sunday dinner. No doubt, we will get back to the soup during the coming week. That’s fine by me as I can never get enough of it.

Start with two bunches of kale. On a cutting board I hacked at the top and put bunches into a colander for thorough washing. Basically, I discarded the stems which were bound by elastic bands. In the past I was more precise in removing the tough stems. That’s tedious and time consuming. This time round I found that the guerilla approach worked just fine. Though the kale was a tad more fibrous than usual. When cooked down for a couple of hours, however, it was tender and perfectly delicious.

In a skillet I cubed and browned the sausage which came from our freezer. It’s always a plus to make a bit of room. We will restock when next in Pittsfield.

The pot was brought to a boil and then reduced to simmer for two hours. The kale breaks down and becomes easier to stir periodically.

After an hour or so it’s time to add the beans. I had red beans in the freezer left from making chili. To that I added a can of drained garbanzos and one of white navy beans. In P’Town they often add potato but I find that it breaks down and makes the soup starchy after a couple of days. An option is to cook them separately and add them when serving. I opt to skip potato.

As a one dish dinner it was more than satisfying. Last night I went for seconds but there is still enough for a couple more dinners.

As a ‘side dish’ Astrid broke out the Cape Cod Potato Chips. That was a fun touch and an appropriate homage to a traditional P’Town meal.