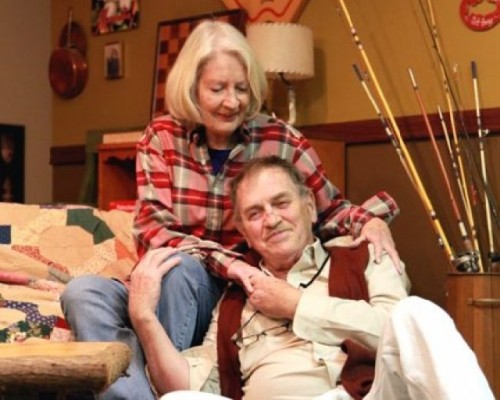 Enjoying their Golden years on the pond. 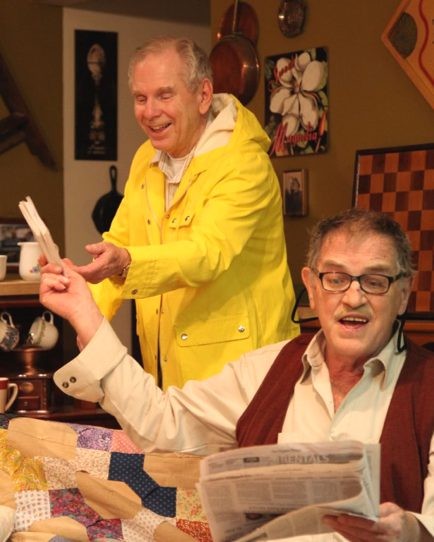 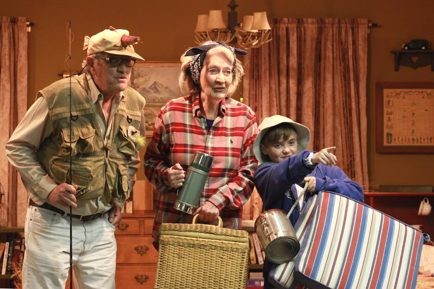 Ernest Thompson’s bucolic and sentimental play “On Golden Pond” is almost bullet proof, but it still requires actors with talent, and a director with a personal vision in order to resonate with audiences.  The St. Joseph’s Players, of Yucca Valley, are fortunate to have both in this winning production.

Rebecca Havely, as Artistic Director of a new and vital theatre serving audiences of the hi-desert, fulfilled her dream of a theatrical group in the hi-desert with the founding the St. Joseph’s Players.  Her first two productions establish and strengthen the new theatre’s budding reputation of presenting excellent work, especially with her loving and tender direction of  ”On Golden Pond”, by Ernest Thompson.

The story in short, revolves around an aging couple, Norman Thayer (Lloyd Steel in a wonderfully nuanced performance) and his wife Ethel (Sue Kelly in another fine turn), who spend each summer at their cottage on a lake called Golden Pond. Their daughter Chelsea (Sadie Johannsson), who lives in California, is planning to visit them and introduce her new fiancé to Norman and Ethel.  Chelsea has always been somewhat estranged from her cantankerous father with the result being that their relationship has always been one of bickering and one-upsmanship, on the part of Norman over the years.

Chelsea introduces them to her dentist fiancé Bill (Ben Bees) and his young 13 year-old son Billy (Trevor Carpenter).  Also, she asks her parents to permit Billy to stay with them while she and Bill, Sr. spend some time to themselves on a vacation in Europe.  Billy is annoyed with the thought of being left with elderly strangers with no friends nearby, and nothing to do.  Rural Maine is miles apart in distance and culture from California. Additionally, he resents Norman’s off-putting remarks and abrupt manner.  But eventually, he comes to enjoy his Golden Pond experiences with the Thayer’s.

Chelsea and Bill return from their European vacation to find that Norman has bonded with Billy via fishing.  Chelsea becomes a little envious of the fact that Norman and Bill’s young son have come to appreciate one another in a way Norman never did with her.  Chelsea’s childhood friend Charlie the mailman (Ben Sasnett), who always had a bit of a crush on her, still delivers the mail and stops by to chat of the old days over a cup of coffee with her and Norman and Ethel.  Jannane Turner plays the business-like rural telephone exchange operator that Norman loves to bug about the telephone service.

The performances are affecting, reality-based, and poignant.  Lloyd Steel, an actor with a resume as long as your arm brings a freshness and professionalism to his Norman portrayal (one of his best).  The on-stage chemistry between Steel and Sue Kelly (also a pro actor of many years standing) is a delight to watch.  She keeps Norman on his toes.

Sadie Johannsson as Chelsea delivers a nicely nuanced and controlled emotional performance, blending comedy and reality in her scenes with Steel and Kelly.  Ben Bees,  brings his trained actor’s demeanor to the stage.  His scenes with Steel are a study in “on-stage discomfort”; especially when he asks for permission to sleep in the same bedroom with Chelsea.  Young Trevor Carpenter is a real find.  Most young actors lack the self-confidence he displays in his scenes with Steel.  Ben Sasnett as Charlie the mailman brings a genuine homespun charm to his performance.

The night I attended, the audience just lapped up every line and situation, filling the cozy 56-seat theatre with howls of laughter.  A great deal of the credit for this “family values” production being as successful as it is belongs to Desert Theatre League (DTL) award winning director Rebecca Havely, whose sharp eye filled the stage with props, emotions, and action with tender loving care. In the traffic management department, Havely’s functional set design includes a rustic home, a pier and wharf, and an unseen lake which comes alive in the audience’s imagination every time we hear the haunting sounds of the loons.  It’s quite a directorial coup.

“On Golden Pond” performs Saturday evenings at 7 pm, and Sundays at 2 pm through March 16th.