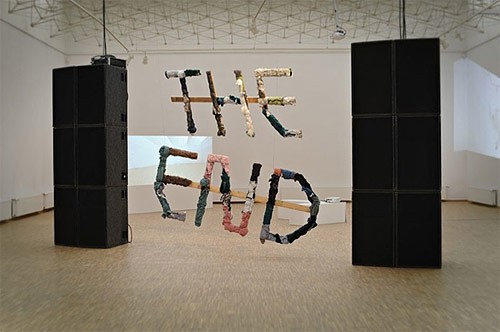 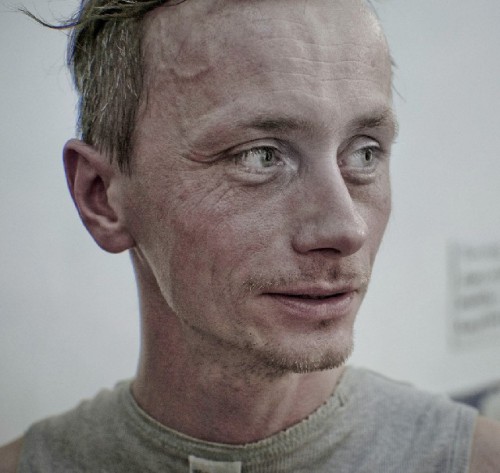 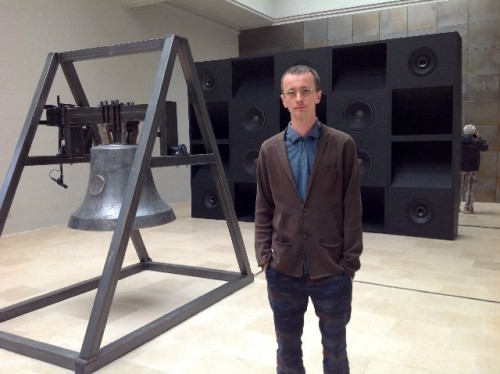 For whom the bell tolls. 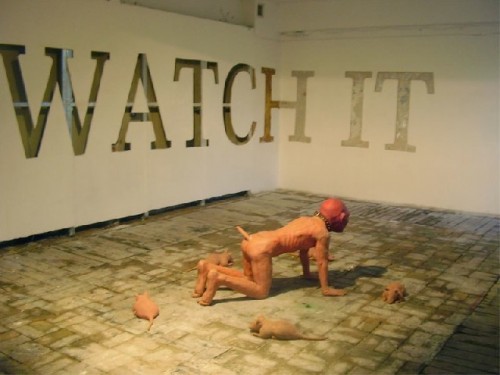 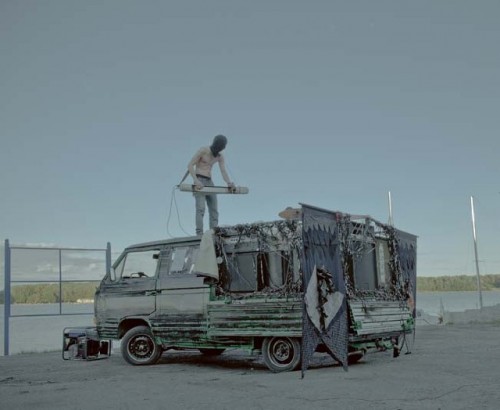 Konrad Smolenski tunes his electric tomahawk missile atop the BNNT vehicle. Image courtesy of the artist.

It would  be funny to say that Konrad Smolenski is someone you will soon have heard of. Already a pretty big deal throughout Europe, he had the honor of representing Poland at the Venice Biennale this year and made quite the lasting impression. The exhibition, titled Everything Was Forever, Until It Was No More situated two handcrafted bells, a large standing wall of broadband speakers, and a third element consisting of a wall comprised of familiar yet nondescript square metal doors within the exhibition space. The elements worked as a sonically symbiotic structure in that the periodically sounding bells would be coerced to ring out simultaneously, their sonic expulsions being recorded and played back through the wall of speakers within the exhibition space, one wall of which was this harsh, aurally reflective and unforgiving skin of metal.

In a certain light, Smolenski’s entire body of work seems to be encapsulated within this project. Having learned a lot from his time working as a student in an influential sound lab in the Fine Arts Academy of Poznan, Smolenski always saw audio and visual art pursuits as being two elements of the same exploration. From Smolenski’s view, sound work seems to be the contemporary zeitgeist in the Polish art scene. More and more visual artists are beginning to express themselves within the realm of audio art, in part stemming from the forward thinking of a scene growing out of the audio culture fostered by sound labs, including the one where Smolenski got his start at the Fine Arts Academy of Ponzan.  It’s an exciting trend and Smolenski finds himself right in the thick of it.

One of the artist’s more exciting current projects is being an elemental member of the band BNNT.

Acting as a duo, Smolenski teams with Daniel Szwed to become two members of a sound-bombing experiment, traveling about performing sonic assaults on improvised public settings, gallery spaces, and musical festivals as BNNT. The project has been ongoing since 2007 and serves as a fitting example of Smolenski’s understanding of art being equal parts audio, visual, and performance; a creative cocktail of expression which the artist sees as integral pieces to the same experiential puzzle. Smolenski’s work seems to present a disdain for making distinctions between audio and visual creations, about this the artist states, “There are no definitions or clear cut distinctions. I try to blur them in search for a total reception…Often the perception of art is limited by habits. I aim at creating a more open experience.”

BNNT’s sound is raucous and dissonant, ominously dark and distorted. Incorporating recorded elements such as political speeches, crowd grumblings, and other sonic disruption to build a sonic output defined by a feeling of unrest and unease, the work as a whole seems very much about the nature of politics both in the subjects approached by their songs and the nature of how they put together performances.

The DIY style of their work is immediately present in their mobile truck stage, guerrilla approach of their often unannounced shows, and outfits styled after balaclava-wearing revolutionaries and other agents of forced change and dissatisfaction. Smolenski’s creation of a baritone electric guitar with a body styled after a hollowed out tomahawk missile adds the finishing touch that points to a need to be taken seriously as a carefully considered art performance bent on change.

The work seems appropriately timed given Smolenski’s ideas about the lack of open minded-ness in the public’s approach to art paired with the state of flux and economic difficulty the European union has undergone as of late.

The venue that seems likely to be the most in need of the change Smolenski and Szwed can provide would probably be the world of art, although it is hard to say in most instances whether politics guides culture or if things actually happen the other way around. We are pulling for the latter. In either case, the next time the BNNT rolls into town we would all do well to bum a ride.