Theater for the New City's Catapult! 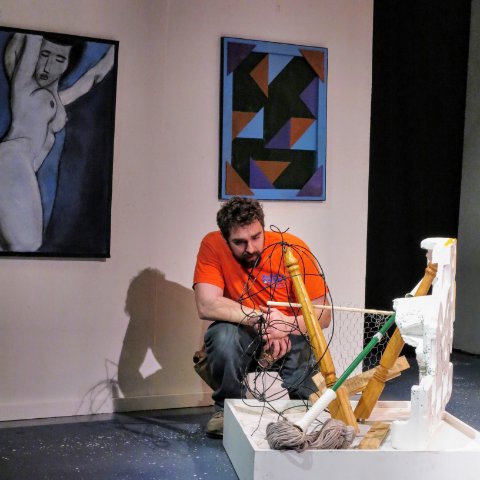 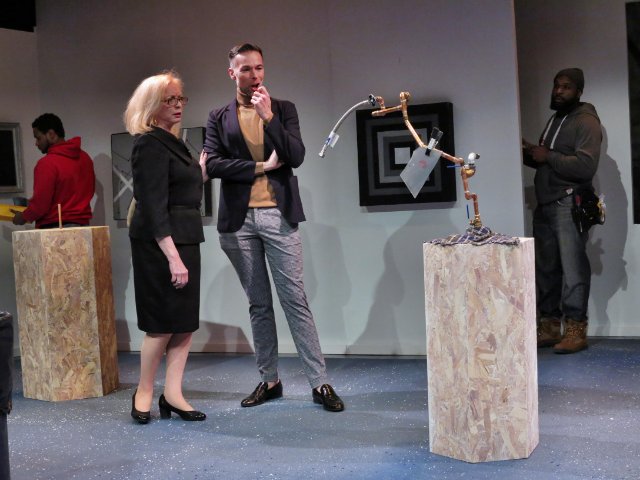 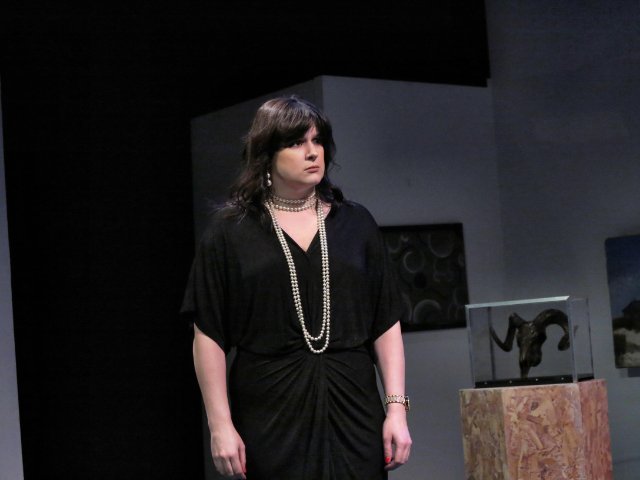 Kate A. Mcgrath comes to understand her parents taste 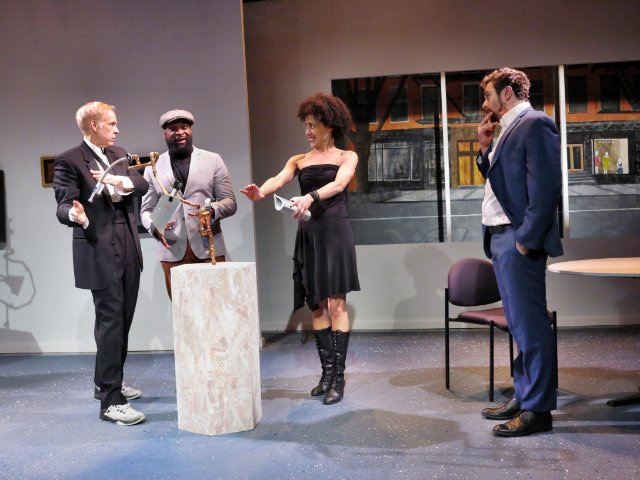 Robert Lunde, Chelsea Clark, Erinn Holmes, Ashley Underwood Is it or isn't it?

If you have ever walked into an art gallery and wondered why, or what, or whether about any particular piece – or the venue as a whole, be prepared to laugh! Fitzgerald's rapid-fire dialog and a versatile and well-cast cast make this visit to the gallery worthwhile. Mark Marcante, Mathew Thomas Burda, David Jones, Lytza Colon Kanako Nagayama and Quinn Therrault have set the scene; the stage becomes a most credible Gallery Zuzu replete with works of art.   Director, Tony White knows his subject well.  His characters walk out of the art gallery scene like pieces in the exhibition.

Rudolf Zuchert, (Daniel Kloeffler) as the owner of the trend-setting gallery exhales the anxiety and legato atmosphere that permeates the gallery. He is as he is supposed to be: sharp, flexible and with an eye for business-- the business of art. His premier patron, Claire Shackleford (Catherine Hennessy) wife of a prominent newspaper owner Irwin Shackleford (Alex Shafer) is the quintessential New York smart buyer/trend-setter. Her performance is alive with all the best and worst of whatever it is her charter might be accused.  Smart, trendy, hypocritical, ruthless, real, phony and determined to maintain herself as the queen of trend. Her daughter, Celeste, (Kate McGrath,) recently publicly humiliated by a divorcing husband who has put intimate photos on social media, has no stomach for her parents' hypocrisy and pretentious facade.

Joan Stanchen, (Erinn Holmes) and Tyrus Gambry (Robert Lunde) are the lucky, or unlucky, contractors whose construction debris is an inadvertent inclusion – a piece of non-art which becomes the perfect storm to up-end the smooth world of Zuzu gallery.  Their spirited performance is the meat of the play as they struggle with their newly acquired roles as artists! Are they charlatans? Frauds? Con artists?  Can enough pompous platitudes, meaningless metaphors and soliloquized sophistry make a silk purse of a sow's ear? Or perhaps it can’t. How can we tell the legitimate artist from the fraud?    Serious urbane international art collector, Victor Lopez (Jerry Chapa) and crass hedge-fund millionaire Mr. Crastin (Mark Solari) are both determined to get in on the next big thing. Are they taken in by fraud, or investing in its perpetuation?  Are we, the audience part of the ruse as we cheer on the success of the 'artists'?

What is art anyway? Where do the realities of creation and the varied paths of individual artistic expression meet the very different reality of monetary success, investment and profit? Or do they?  Is the business of art, art?  Or does art exist in a special way within the endeavors of those who make the effort to ask others to think through the use of visual media.

Fitzgerald's humor and playful use of language is sustained by a strong cast of supporting actors. Catapult! is fun, and a good laugh which invites us to think again about the social role of contemporary art and those who promote it.