Theatre for the New City, NYC 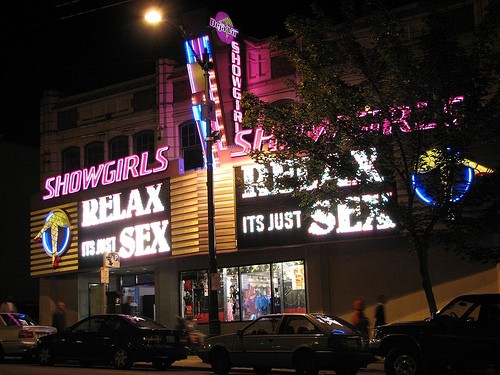 What are the moral boundaries of cybersex? What’s the difference between pixels and flesh? In JUST SEX, a brisk new comedy by Brandt Johnson, Katherine and William are in lust with other people — but married to each other. Unwilling to cheat, they open their marriage, log on, and get off. They confront frequent, hilarious reminders that extramarital escapades can lead to much more than just sex. What begins as a simple online exercise in physical release becomes a complex, real-life challenge to the couple’s notions of normalcy, love, and fidelity.

JUST SEX is Brandt Johnson’s second play to be produced. He performed his first play, a solo show called GIVE AND GO: LEARNING FROM LOSING TO THE HARLEM GLOBETROTTERS, at FringeNYC 2007 and again at New York's Metropolitan Playhouse in 2010. Mr. Johnson’s other acting credits include Walt Disney’s Broadway workshop of HOOPZ, directed by Savion Glover and Kenny Leon; the Off-Broadway production of THE PITCHFORK DISNEY (Blue Light Theater Co.); and the workshop of JOE FEARLESS with Matthew Broderick and Rosie Perez.

Meghan Miller was last seen on stage in the play HAUNTED HOUSE at the Irish Repertory Theatre. She is also a member of the all-girl vaudeville punk trio The Bambi Killers.

The Pulitzer Prize-winning Theater for the New City is committed to developing and nurturing creative talent in the New York City area. Programs sponsored by the Theater include the Resident Theater Program, Arts-in-Education Program, Summer Street Theater Tour, the Lower East Side Festival of the Arts, the Village Halloween Costume Ball and, most recently, the Dream Up Festival of New Plays.  The Emerging Playwrights Program was founded in 1984 as part of the Resident Theater Program, and seeks to create a space where theater artists have room to develop new visions, free of commercial restraint and pressure.  Past productions have included song, dance, music, puppetry, poetry, and epic styles of drama, and have garnered 43 Obie Awards

Scheduled March 22 through April 15, JUST SEX performs Tuesdays through Sundays at 8pm (with an added 3pm matinee on Sunday, March 25). Tickets are $25, and can be purchased through SmartTix by calling 212-868-4444 or online at www.SmartTix.com