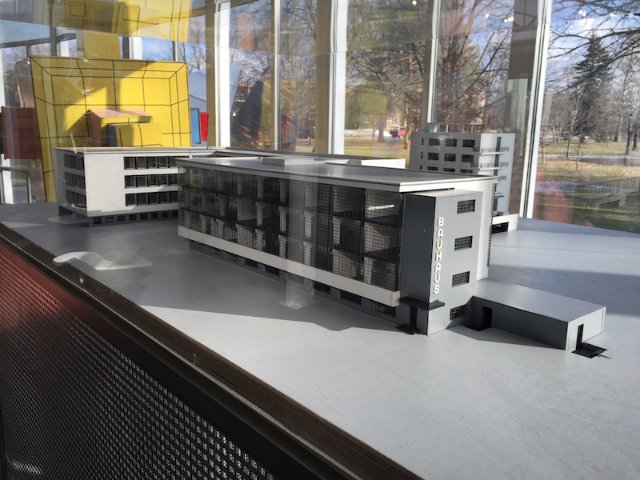 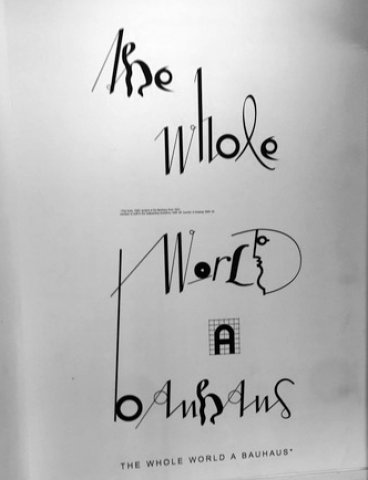 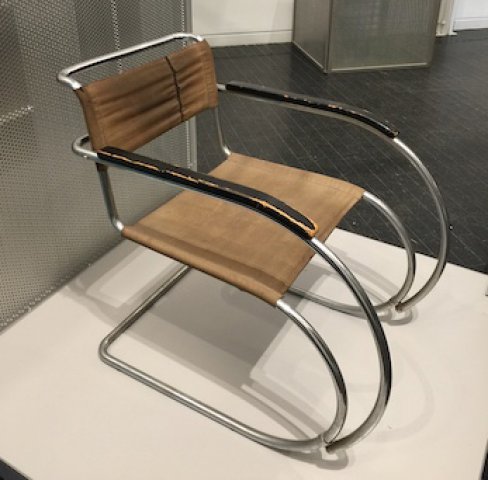 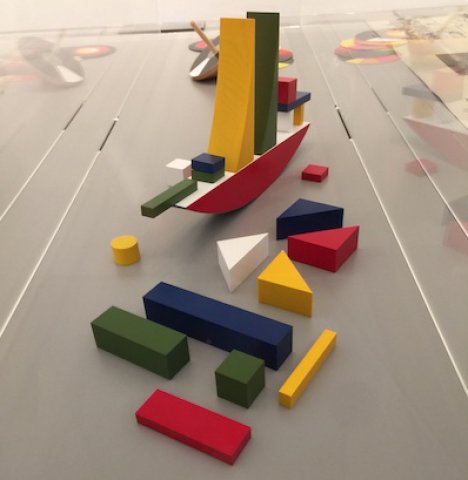 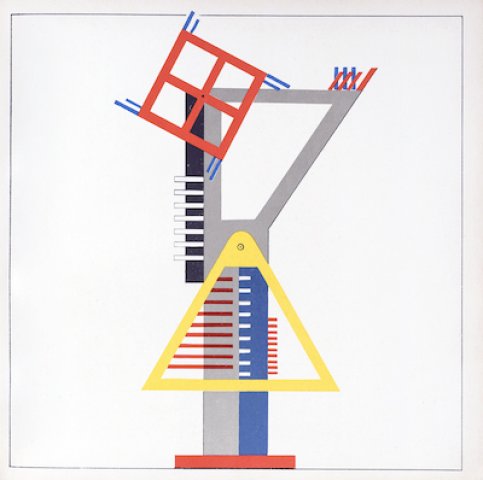 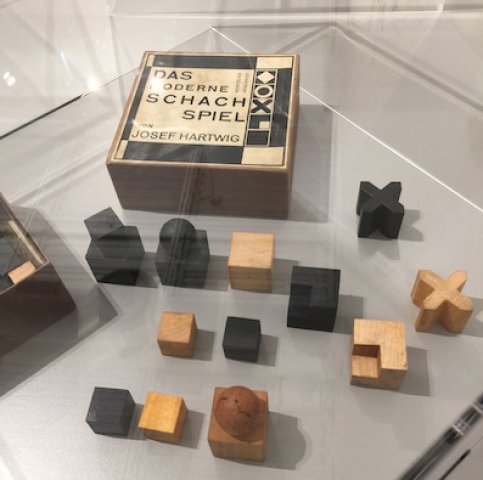 Furniture. Textiles. Toys. Home goods. Buildings. Photography. Theater design. Typography and graphic design. It’s hard to exaggerate how much the visual design that surrounds us is influenced by the work of the Bauhaus, the iconic but short-lived school of art and architecture that sought to unite art with industrial technology.

Briefly, the Bauhaus was a German design school founded in 1919 that made its home in after the Nazi regime made life impossible in . More broadly, the Bauhaus was a huge influence on global design for decades and in fact, for the 100 years since its founding. Bauhaus instructors included some of the most famous modern artists and architects such as its founder, Walter Gropius, Ludwig Mies van der Rohe, Wassily Kandinsky, Josef and Anni Albers, Paul Klee, László Moholy-Nagy, Oskar Schlemmer and Lily Reich.

The Whole World a Bauhaus, the 100th anniversary exhibit of Bauhaus work, is now on display at the Elmhurst Art Museum—and this is the only place in the U.S. where you will be able to view this important exhibit of art, design and architecture. The exhibit includes photographs, works on paper, models, documents, films, audio recordings and furniture and household objects from the 14 years—1919-1933—in which the Bauhaus operated in . The museum is adjacent to the McCormick House, one of the three existing houses in the designed by Mies van der Rohe, the last director of the German Bauhaus (1930-33), later a architect and teacher.

This exhibition is part of the Year of German-American Friendship initiated by the German Federal Foreign Office and the Goethe-Institut, and supported by the Federation of German Industries.The exhibit was curated by Boris Friedewald, a German author and art historian.

All the World a Bauhaus is organized around eight chapters or themes, each focusing on an aspect of work and life at the Bauhaus during its operation: Art, Crafts, and Technology; Floating; Community; Encounters; The Total Work of Art; New Man; Radical Pedagogy; and Experiment. The museum offers a well-designed catalog in tabloid newspaper size that nicely summarizes the exhibit and shows many illustrations of Bauhaus work. (It’s free but a $5 donation is requested.)–

Virtual Bauhaus: An Interactive Exhibition will be available March 1-22, enabling visitors to put on VR (virtual reality) glasses and tour the Bauhaus school as a student would have done. Spoken eyewitness accounts are included.

Highlights of the Bauhaus exhibit

— A cradle in bright yellow, red, white and blue lacquered wood and tubular steel, designed by Peter Keler in 1922. He was a student at the time and later became an assistant to Wassily Kandinsky. The cradle was originally part of a geometric series of beds for adults and toddlers. You can buy licensed reproductions of the cradle today.

— A well-worn armchair (1927-32) designed by Mies himself that resembles the ubiquitous tubular steel and woven cane side chairs we know as Breuer chairs. Marcel Breuer designed them in the 1920s, along with the tubular steel and black leather chair known as the Wassily chair. (Breuer was said to be inspired by bicycle construction and plumbing fabrication.) The chairs were originally manufactured by Thonet, a German-Austrian furniture maker known for its bentwood designs.

.— A 1932 audio recording, titled “What Will Happen to Bauhaus?” in which Paul Hofmann describes in chilling detail how the National Socialists or Nazis decided the Bauhaus school and its building (criticized for being built of glass and steel) had to be closed. The Bauhaus is described as the home of “Jewish Marxist art.”

— Early photographs of some of the Bauhaus founders, teachers and artists, many of them shown in informal social settings.

— A photograph of a disembodied pair of legs, feet shod in fluffy slippers, and titled “Slippers.”

— Package design and publications showing the iconic Bauhaus typography and use of bold sans serif fonts, especially Herbert Bayer’s 1925 Universal typeface. It’s a bold sans serif based on circular forms and set only in lower-case form. As Bayer is quoted as saying, “Why should we print with two alphabets? Both a large and a small sign are not necessary to indicate a single sound. Capital A equals small a.”

The Bauhaus in and

The Bauhaus school, founded in in 1919, was itinerant for its 14 years of existence. It moved to the industrial city of in 1925 and took over an old telephone factory in in 1932, where it was open for just one semester. Mies, who had become the school’s third director in 1930, was interrogated by the Nazis for 36 hours in and the school was closed. Bauhaus teachers scattered to , , Tel Aviv, and , where Gropius became a Harvard professor. Hannes Meyer, the second director and a Marxist, went to the . Mies became a refugee and ended up in in 1937, where László Moholy-Nagy had just founded the New Bauhaus,a school that continues today as the at the Illinois Institute of Technology. Mies became head of the Department of Architecture at the Armour Institute, which later became IIT.

The history of the Bauhaus is not a happy one. From the beginning, it was beset by political and artistic disputes; women were refused entrance to the elite architecture program and  relegated to the textiles department; some of the Bauhaus teachers had “complicated” relationships with Nazism. After , the school never found a comfortable home in and that led to a diaspora of Bauhaus teachers and artists all over the world. For more background on the history of the Bauhaus and its situation in today, see this excellent article on the Bauhaus from the New York Times Style Magazine..

Why, with all the large museums of modern art in the , did this iconic exhibit end up at the small, but perfectly designed, ? EAM is devoted to rotating exhibitions of contemporary art and also to the preservation of the rare single-family home designed by Mies van der Rohe. I had a chance to chat with John McKinnon, the museum’s executive director, about this question. He explained that recent work on Mies’ 1952 McCormick House, adjacent to the museum, has brought international attention to the venue. The museum staff has done extensive research for the renovation of the house and that has paved the way for new programming and exhibition-related activities. In addition, the museum has a relationship with the Goethe-Institut, one of the partners in the Year of German American Friendship.

Mies designed just two other houses. One is the Farnsworth House in , , and the other is the Morris Greenwald house in . Mies is better known for his many tall buildings, including most famously 860, 880 and , the and the IBM building in and the in .

Herbert Bayer, one of the early Bauhaus designers and typographers, was a design consultant for Chicago-based Container Corporation of , known for decades as the home of fine industrial and graphic design. Its leader, Walter Paepcke, was a patron of graphic arts and design. (CCA, a manufacturer of corrugated cartons and containers, went through several mergers and sales and is now part of the Smurfit-Stone Container Corporation.)

was also one of the stops on the 50th anniversary Bauhaus exhibit in the fall of 1969. 50 Years Bauhaus was exhibited in August-September at Crown Hall at the Illinois Institute of Technology (also known as Illinois Tech). The building was significant because it is considered one of the masterpieces designed by Ludwig Mies van der Rohe. The 50-year exhibit, organized in , was shown in several European cities before its visit and was also shown at the in 1970.

As a student of art and design history (and at that time a graduate student in communications), I was fortunate to be able to visit the Crown Hall exhibit. I spent an entire day there and was overwhelmed with the expansive genius of the Bauhausians’ work. I’ve written about that experience here and still have the square 365-page catalog, which needs repair. I’ve located a book-repair specialist who will try to save it for me.

Another exhibit, Chicago’s Bauhaus Legacy, was shown at the Ukrainian Institute of Modern Art in 2013. The exhibit showcased art and design by students and teachers from the New Bauhaus, the and institute of Design in 1937-1955 and some more contemporary work. This is a link to the exhibit catalog.

The , founded in 1981, moved into its current building in 1997. The modernist museum was designed by Chicago firm DeStefano + Partners to incorporate the McCormick house. The museum is located at , adjacent to the Elmhurst Public Library, and one block south of the Union Pacific West Metra stop.

The Whole World a Bauhaus is on exhibit through April 20. The museum is open 11am to 5pm Tuesday-Sunday and closed on Monday. Admission is $12 and free for students and those under 18. Admission is also free on the first Friday of each month.