Maestro Levine Steps Down in Boston 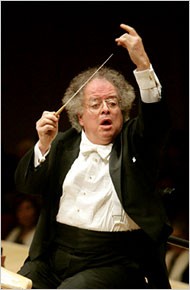 James Levine will steo down as music director of the BSO on September 1.

Sadly Maestro Levine has withdrawn as conductor of the the Boston Symphony effective September 1st.  Marcelo Lehninger conducts in Boston on the 3rd, 4th, 5th and 8th of March.  In New York, Lehninger will conduct Mozart, Bartok and Birtwistle on the 15th  with violin soloist Christian Tetzlaff.  On the 16th. violinist Joshua Bell replaces pianist Maurizio Pollini as Roberto Abbado conducts works by Haydn, Bruch, and Beethoven.  Andris Nelsons conducts Mahler’s Ninth Symphony on March 17th.  Tanglewood plans are up in the air.

Cancellations due to Maestro Levine's health have been a continuing problem since he fell off the stage at Symphony Hall about this time five years ago.  Rotator cuff surgery on his right arm was successful.  (It is his left arm which he now waves as though it had no feeling).  This was followed two years later by a kidney cancer diagnosis.  Treatment was said to be successful.  Since then, Maestro Levine has shown up erratically, with all appearances cancelled at Tanglewood last summer.

The issue of the health of CEOs is a hot one.  Apple has not been forthcoming about Steve Jobs.  Lazard Freres hid Bruce Wasserstein’s problems.  But this is about music-making and art, and Levine is one of the world's most talented and respected conductors.  Still to have to assign the assistant conductor Marelo Lehninger the world premier of a Birtwistle composition is, on the face of it, unfair to the conductor, composer and audience.  Five years seems like more than enough slack to have granted the great Levine.

Levine is reported to have worked on an unsigned pay by performance contract with the Symphony.  There have been over 100 occasions in which his health has been at issue over the past five years.  Now the BSO can entertain the idea of an interim conductor until a suitable replacement is found.  The Chicago Symphony had great success with interim conductor Bernard Haitink.

While stepping down may be a complex process, stepping up for the Maestro offers wonderful opportunities.  Just 10 days ago, we reported his brilliant evening conducting the young members of the Juilliard Orchestra in Smetana’s The Bartered Bride.  Starring on stage was Layla Claire, a soprano whose career the Mr. Levine has helped to craft.  She sang in Mahler’s Second at the opening night of Tanglewood last summer under the baton of Tilson-Thomas subbing for Levine.

At Juilliard, Levine looked positively youthful as he drew tones and phrases out of a young orchestra that sounded as though it might have playing next door in the pit of the Met.  He bounced onto the stage for his curtain call.  Conducting Elektra at Tanglewood in 2006, he drew professional performances out of the students. No one plucks talent the way he does.  He is a man of impeccable musical taste and singers love him.

If he could work as he did so recently with the talented singers that various constituents of Lincoln Center are incubating and do stunning productions at Juilliard with up and coming talent, he would have fun and be incomparably useful. Perhaps he could also return to work with students at Tanglewood.

Peter Gelb, General Manager of the Metropolitan Opera, sent this note shortly after the BSO made its announcement: "Dear Members of the Company.   This afternoon the Boston Symphony Orchestra has announced that James Levine will be stepping down as Music Director.  Although retiring form his position at the BSO, I would like you to know there is no change in his status at the Met. Maestro Levine intends to fulfill his schedule here for the remainder of the season and in future seasons.  Best wishes."

The Met has a much easier problem to solve than Boston did. With fabulous Fabio Luisi principal guest conductor (a Wagner specialty among his many talents), and guests like Simon Rattle and Yannick Netzet-Seguin, Gergiev in the Russian repertory, and on and on, the Met will be just fine.  Hopefully, Mr. Levine will conduct there as much as he is able, but I for one would like to see his focus change to grooming a new generation of talent for major careers.  No one could do this better than Maestro Levine, who deserves a lighter schedule, but one that uses all of his unusual and much admired skills.