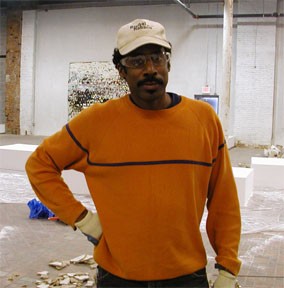 Jamacian born artist Nari Ward will have a major installation at Mass MoCA.

Opening to the public on April 3, 2011, artist Nari Ward will create a massive new exhibition comprising several interconnected works and encompassing an entire floor of MASS MoCA.   Visitors can experience the new show, titled Sub Mirage Lignum, as both a large-scale environment and as a series of smaller yet connected spaces.  Ward's dramatic sculptural installations are composed of material systematically collected from the neighborhoods where he lives and works or is personally connected to. At MASS MoCA those "neighborhoods" are his birthplace and childhood home of Jamaica and the century-old restored capacitor factory that houses MASS MoCA.

The title, Sub Mirage Lignum, represents the three main themes of the exhibition: sub, in the dual sense of "underneath" and "substitute for another (space)"; mirage, a false image produced by the refraction of light, subject to human interpretation; and lignum, derived from Lignum Vitae ("wood of life"), a tree whose bloom is the national flower of Jamaica.

Ward's exhibition will function as a hybrid zone where the real and the imaginary are intermingled. The centerpiece is  a monumental 16-foot long sculpture titled Nu Colossus whose form comes from a small conical basket-woven fish trap - a trap which lures fish only to ensnare them.  This duality of seduction and entrapment is central to Ward's idea of mirage, which as an image both distorts reality and points to a sense of need. Suspended inside the cone, broken bits of weathered furniture appear to be both stuck in the trap while also intrinsically a part of its structure. Nearby, a 30-foot long wooden boat held up by large sheets of glass references glass-bottomed tourist boats, but also creates a mirage of the boat floating in the middle of the space.

Adjacent galleries will hold connected works like Stall, a sound and sculptural piece. Though a poor country, Jamaica is home to a booming tourist trade, which drives a robust market for souvenirs that are linked to national cultural traditions. Ward recorded sellers in a Jamaican marketplace calling to him to buy their wares; this soundtrack will be combined with elements collected from the former Sprague factory (now MASS MoCA.) This beckoning is key, for just as the sellers of tourist goods are calling to people to see their craft, Ward is doing the very same thing in calling visitors to the museum.

Mango Tourists takes the form of 10-foot tall snowman shapes encrusted and embedded with found objects and mango seeds. This work unites the two sites of inspiration for Sub Mirage Lignum: the former Sprague factory and Jamaica. The sculptures will be covered in foam embellished with capacitors found at MASS MoCA and several thousand dried mango seeds harkening to the tropics.  The capacitors and seeds will encase the sculptures like intricate beading, another mirage shifting humble materials to jewels. Additionally, both the capacitors and the seeds contain potential, one for power and the other for reproduction.
Lastly, the exhibition will also include two video works: Sweater, a macro-view close-up of pores on Ward's skin and the sweat beading and pouring off its surface, linking the artist to the fluidity of the ocean but also the toil of labor; and  Jaunt whichmerges two mirages -- one in Jamaica and one in North Adams -- further connecting these two disparate places. In Jaunt the central image comes from footage of the water horizon line in Jamaica, which will then be framed by an image of the car wash bays on River Street in North Adams, around the corner from MASS MoCA. This effectively places the mirage of "paradise" smack dab in the middle of the reality of daily life, yet in the distance we can see the clock tower at MASS MoCA, another reminder of the transformation of factory to museum.

Nari Ward was born in St. Andrews, Jamaica, and he currently lives and works in New York. He received a BA from Hunter College, where he currently teaches, and an MFA from Brooklyn College. Ward's work was included in the 2008 Prospect 1: New Orleans Biennial, the 2006 Whitney Biennial, New York, and Documenta XI in Kassel (2003). His work has also been exhibited at the New Museum of Contemporary Art, New York; the Walker Art Center, Minneapolis; and the Museum of Contemporary Art, Detroit. Recent solo exhibitions include Episodes at the Isabella Stewart Gardner Museum in Boston; The Refinery, X: A small twist of fate at the Palazzo delle Papesse Centro Arte Contemporanea in Siena, Italy;  and Rites of Way at the Walker Art Center. Ward has received commissions from the United Nations and the World Health Organization, and awards from the American Academy of Arts and Letters, the National Endowment for the Arts, New York Foundation for the Arts, John Simon Guggenheim Foundation, and the Pollock-Krasner Foundation. Upcoming projects include a solo exhibition at Lehmann Maupin Gallery, New York, and Contemplating the Void: Interventions in the Guggenheim Rotunda at the Guggenheim Museum, New York.

Major support for this exhibition is provided by the National Endowment for the Arts. Additional support from the Toby D. Lewis Philanthropic Fund of the Jewish Community Federation of Cleveland and the Massachusetts Cultural Council.