The Twenty-seventh Man by Nathan Englander 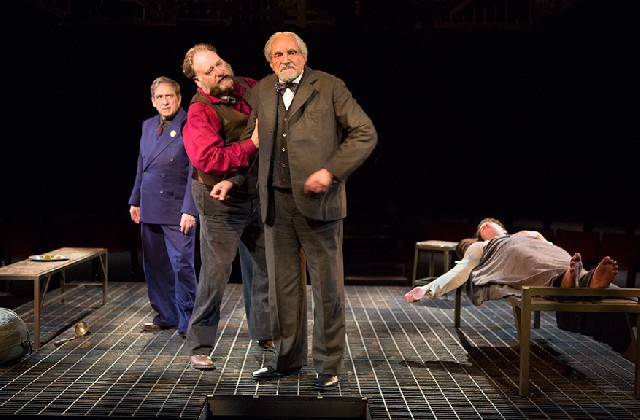 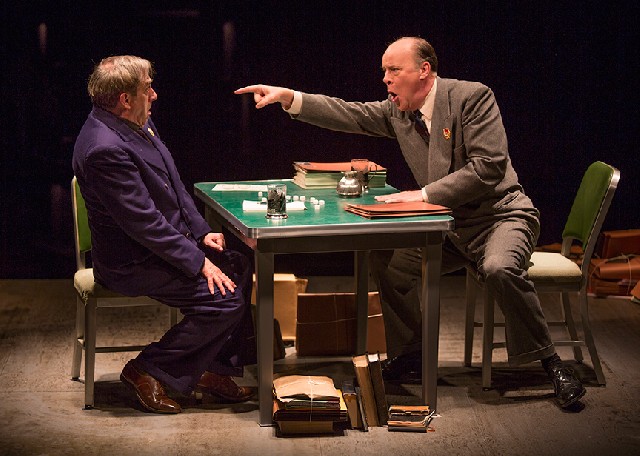 Robert Dorfman as Vasily Korinsky and James Shanklin as Agent in Charge Photo by Jim Cox. 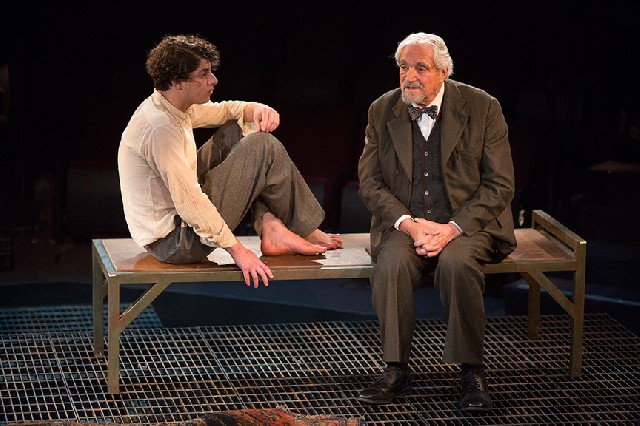 One doesn’t have to be a biblical scholar to understand the opening passages of the Book of Genesis. It informs the reader that in the beginning was the Word. From that moment on the power of words was upon everyone.

Words have the power to influence, to inspire, to destroy, to do many things, both good and bad. The theatre is the medium that grabs and clutches to the heart the words written by others but spoken by actors becoming transformative in the process.

The Old Globe production of “The Twenty-seventh Man” written by novelist and first-time playwright Nathan Englander, has the very good fortune to be directed by Old Globe Artistic Director Barry Edelstein. Edelstein’s easy manner belies the intellectual rigor he applies to all of the productions he directs.

In 2012, he directed the world premiere production of Englander’s play at New York’s The Public Theatre. This time, however, he has crafted a production that has been reimagined to be staged in the Sheryl and Harvey White Stage – in the round. No walls. The six actors are out there all alone (theatrically ‘naked’, except for each other). Focus is the key element that grounds this splendid ensemble cast in powerful, poignant, and yes, at times, even humorous moments albeit, in a grim tale of artistic and Yiddish intelligentsia repression in the Soviet Union during the 1950’s

The story in short is set in a Soviet prison and revolves around the fate of twenty-six writers, the crème de la crème of Yiddish literature in Russia.   Four actors become surrogates for the other twenty-two prisoners who are unseen and housed in other off-stage cells. Suddenly, a twenty-seventh prisoner Pinchas Pelovits (Eli Gelb) appears. He’s a teenager, unpublished and unknown. Baffled by his arrest, he and his cellmates wonder at what has brought them together and begin discussing what it means to be a writer in troubled times in a society run by the brutal dictator Josef Stalin.

Leading the cast of players is Broadway and television star Hal Linden as Yevgeny Zunser, a sardonic leading writer of his time. Linden’s dialogue from time to time, requires chunks of Yiddish when speaking to the others. In real-life Linden, although raised in a Yiddish-speaking home, is a non-speaker, but like most good actors he has a working acquaintance with all languages. Linden’s performance would bring a smile to the face of humorist Leo Rosten, the author of the book: The Joys of Yiddish.

Robert Dorfman as Vasily Korinsky, portrays a Yiddish poet who believes his fame and acquaintance with Stalin will be his ticket out of prison, telling the others that this incident has all been misunderstanding and a huge mistake. Dorfman’s demand to see the Agent in Charge (James Shaklin) a bureaucratic functionary, fall on the deaf ears of their guard (Lowell Byers). When Shanklin and Dorfman finally do meet, Dorfman caves under the sly interrogation by Shanklin and meekly returns to his cell to commiserate with his fellow cellmates.

.Ron Orbach playing Moishe Bretzky, delivers several telling and passionate speeches concerning their plight, reminding them that “…Hitler only wanted to kill our bodies. Stalin wants to destroy our souls.” Orbach is big man with a large on-stage presence. His insightful speeches foretell the fate of all four prisoners. And when he speaks, the others listen.

The subject matter of the play is based on a little known 1952 event referred to as “the night of the murdered poets”. Playwright Englander has taken some literary license for theatrical effect, but in so doing, he doesn’t diminish the impact and overall veracity of the actual events.

The real power of the production lies in the wonderfully compelling ensemble performances and the deft direction of Edelstein. There are moments of aching poignancy and moments where universal truths cannot be denied. It’s potent theatre at its best.

“The Twenty-seventh Man” is an impressive production now playing on the Sheryl and Harvey White stage at The Old Globe theatre complex. The drama runs through March 15, 2015.