At the Pasadena Playhouse 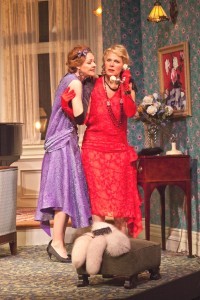 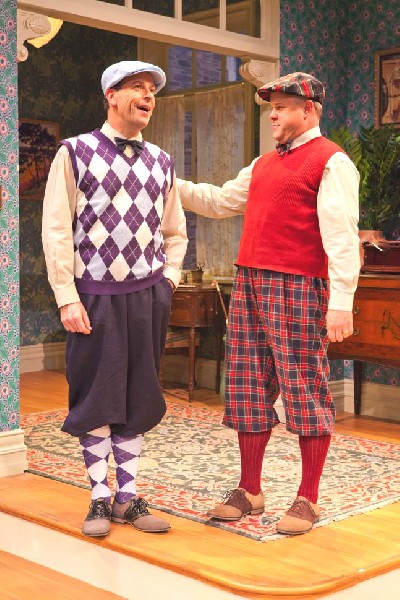 Loren Lester and Mike Ryan show off their colorful knickers.

It may not be “Downton Abbey” but the British comedy of manners “Fallen Angels”, currently on stage at the venerable Pasadena Playhouse, honors the sophistication and style of playwright, director, actor, composer, and all round Renaissance man, Noel Coward. Coward was arguably one of England’s finest playwrights in his day.

The Pasadena Playhouse has a long and pleasant association with the plays of Coward. Twelve of his plays beginning with “Hay Fever” in 1926, “Star Quality” in 2003, and now with “Fallen Angels”, have been seen on its stage.  Director Art Manke, is a bit of a Renaissance man himself.  He is a well-known creative and talented director to Los Angeles audiences, as well as to Regional Theatres throughout the country.  He is also somewhat of a Noel Coward scholar, so to speak.

When playwrights know and understand the soul and culture of their subjects, the play is enriched ten-fold.  Coward was a writer who knew his culture, his history and his countrymen. Regardless of England’s class-conscious society, Coward’s characters, problems, and their dreams had an appeal that crossed all cultures. His plays and films were understood and appreciated by millions.  He could create sophisticated and brittle drawing room comedies like “Present Laughter”, and “Blithe Spirit”, to poignant and tender plays like “This Happy Breed”, and “Brief Encounter”, just two of many of his plays that have been made into movies.  During WW II, his enduring drama “In Which We Serve”, was a highly successful film whose characters demonstrated the gritty, English mind-set and discipline when it came to surviving the German Blitz of London, and was also instrumental in building support for its war effort here in the USA.

Manke’s production of “Fallen Angels” is a delightful comedy romp thanks to its three female stars:  Pamela J. Gray, Katie Macnichol, and Mary-Pat Green.  The ladies of “Fallen Angels” are ably supported and abetted by male actors: Loren Lester, Mike Ryan, and Elijah Alexander.  The company, are all Yanks, but carry off the “veddy British” dialogue with aplomb and the proper amount of refined dignity and a sense of the absurd.

Macnichol as Jane Banbury, in particular, delivers the more energetic and animated performance of the three ladies but she never crosses the line (although she comes devilishly close) into outright farce.  Gray as Julia Sterroll, has the unenviable plot part role, which doesn’t allow for a lot of acting pyrotechnics, however, Gray’s next day hangover scene was spot on in its verisimilitude.  I had the urge to reach for three aspirin myself.  Green as Saunders the Maid, gets to toss her zingers into the performance mix with a wink and a shrug, and a lot of nice stage business.

Lester (Willy Banbury), Ryan (Fred Sterroll), and Alexander (Maurice Duclos) have their moments as well, but the play belongs to the ladies.

When it comes to the technical credits the Pasadena Playhouse has few equals.  It can stage anything.  Manke’s creative team led by Set Designer Tom Buderwitz, provides a nice, wide-open playing area which allows the actors the space they need to deliver their magic.  Peter Maradudin’s lighting design compliments the costume designs of David K. Mickelsen, and Dialogue Coach David Nevell, deserves kudos for prepping and keeping the actors on their “accent-toes” (they’re all Yanks remember).

It’s good to see that Artistic Director Sheldon Epps has the Pasadena Playhouse back on  course after navigating the rocky shoals of financial woes that plagued one of the country’s finest Regional theatres a couple of seasons back.

Up next at the Playhouse is “One Night With Janis Joplin”, a musical tribute to the late singer, which opens on March 15th.

Go online to www.pasadenaplayhouse.org for reservations and ticket information.