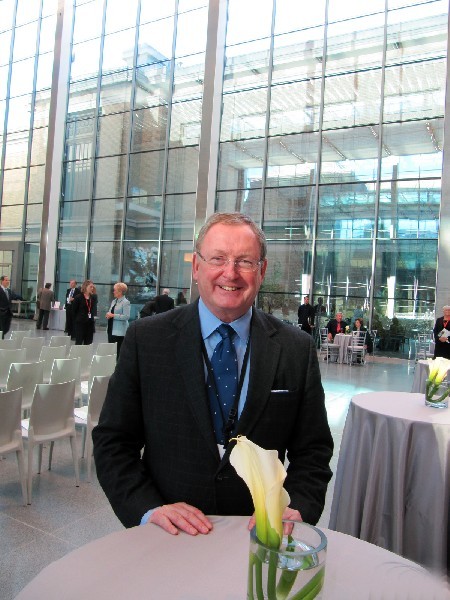 Mr. Rogers in his neighborhood the atrium of the new Art of the Americas wing. Giuliano photos. 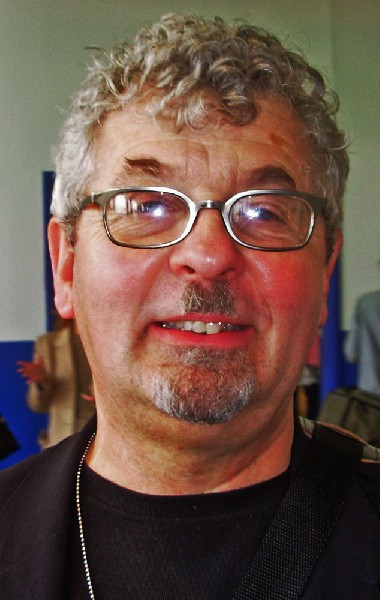 Berkshire Fine Arts opera correspondent and retired art critic, David Bonetti, wrote in response/ rebuttal to our coverage of the retirement of Malcolm Rogers from the Boston Museum of Fine Arts.

The always feisty critic raises interesting and different points. He has long been one of “Malcolm’s” strongest defenders. Indeed arguing that he was the museum’s greatest director with certain qualifications as he wasn’t around for most of its history.

But in Bonetti’s opinion Malcom was indeed a fine fellow. What follows is his correspondence.

Gee, Charles, there's so much here to respond to I don't know where to start.To begin with, you have to admit that Malcolm - as everyone calls him, whether he likes it or not - was the MFA's greatest director since the end of World War II. (since I don't know the history before that that well, I can't say whether he was the greatest director in its history, but I suspect that he might well be a contender.)

We have to remember what the museum was like before he came - there were dust balls blowing around in the galleries! Under his predecessor, the hapless Alan Shestack, housekeeping languished. Is that important? YES, it is. Because it shows a contempt for the public that Shestack also exhibited by also shutting the Huntington Avenue entrance.

Malcolm opened that and the Fenway entrance. He kept the galleries clean, and the guards, who I talk to regularly because they are the barometer of the museum's weather, embraced his directorship because the general change in the institution's esprit de corps. (The attempt to replace them with non-union scabs is another story.)

In addition to all the money he raised, Malcolm built the addition the museum desperately needed (which that money paid for). He kept it open 7 days a week, he acquired an enormous amount of art, much of it significant, and he embraced cultures that the museum had previously ignored.

(To his credit, Shestack established the African department.) In short, the MFA is today a dynamic institution, with an exhibition, film and music program that is the envy of museums elsewhere. (During my sad sojourn in St. Louis, the programmer for the St. Louis Art Museum told me that the MFA showed more films than any other museum in the country and that its program was the model for museums nationally.)

About the so-called "Saturday Massacre." the way it was done was unfortunate, the result perhaps of a Brit being given bad advice from American corporate types about how workers are dismissed. But was there a loss to the firing of Anne Poulet and Jonathan Fairbanks (who has since been given emeritus status)?

If you care about modern art, the answer is NO. Did either of them as curators of decorative arts and sculpture ever purchase 20th century art sculpture? Basically, no.

Poulet purchased a fireplace surround by Jacques Lipschitz and if Fairbanks ever diverted his interest from colonial furniture it was toward traditional sculptors like Katharine Anne Weems. (Who she?) No one seems to mention the fact that under Poulet's watch, the Brancusi purchased by Perry Rathbone was stolen and melted down for its gold (titled "the golden fish," it was in fact made of polished brass. Alas.) Did she attempt to replace it with another modernist sculpture? There is no record of her having done so.

Was Malcolm a populist? Yes. Was that a bad thing? No. How can people who listen to popular music - the whole rock to hip-hop spectrum or go to the dreck of Broadway theater - suddenly get huffy about a populist in the visual arts?

Did I like the idea of a Herb Ritts show? No. (I didn't see it - I was living in San Francisco.) But fashion/celebrity photography is a legitimate genre for collection and exhibition in a museum that pretends to collect the material culture of the entire world, and it was a smart area for the MFA to move into since it was undervalued and under-collected.

Same thing with automobiles (another show I did not see) and fashion. The MFA has closets full of 18th century French and English fashion and worth gowns, so it's not supposed to collect Charles Issey Miyake, Jean-Paul Gualtier and Alexander McQueen?

Where so you draw the line?

Did I like everything Malcolm did? Of course not. He admitted to the Boston Globe's Sebastian Smee that if there were a legitimate criticism of his taste it was that he had a jumble shop aesthetic.

Sometimes I groan when I enter MFA galleries - so much stuff! In that interview, he cited the 18th century decorative arts gallery that opens directly off the Bernard Madoff atrium (sorry, the Carl and Ruth Shapiro Atrium) as his favorite. That gallery, despite the many gorgeous objects on display, gives me agita the minute I walk in.

And let's not even talk about the recently installed Dutch galleries! I lost it when I went there, berating the guards who had nothing to do with it and who basically agreed with me. You couldn't see the paintings -  Rembrandts, Ruisdaels, Steens, etc. - because of the vitrines filled with tschotckes, terrific tschotckes to be sure, but objects not to be shown in such numbers, blocking the view of the paintings.

Malcolm doesn't seem to understand that there is such a thing as a painting gallery. As a veteran of the National Portrait Gallery in London, I can't imagine where he got that idea. I suspect it is an expression of his deepest most personal taste. He has said that he will retire to a cottage in the English countryside. I'm sure his den will be well supplied with Tobey Jugs. God bless the Queen.

PS I have absolutely no problem with Dale Chihuly's erection in the Shapiro (Madoff) atrium. It looks splendid there. Chihuly is the great glass artist of our time and the work he created for the MFA is a masterpiece. Do I embrace everything he makes? No. Much of it is kitsch, as the show of his work the MFA mounted demonstrated. But most of it sets the standard for glass art of our time. So, art snobs, all I can say to you is - get over it.

PPS What I hope for in a successor to Malcolm is someone who accepts modern/contemporary art as easily as he embraces impressionism and colonial furniture. The last director who actually purchased modern art for the museum was Perry Rathbone - if only he had stayed on for another few years! The MFA needs someone like him who will use its acquisition funds to buy a great Leger, Magritte, De Chirico, Ernst, Malevich, Bacon or Dubuffet, etc., the kind of work that keeps it from being the great comprehensive museum it aspires to be.

Sidebar on Raphael, Rathbone and Reuppel.