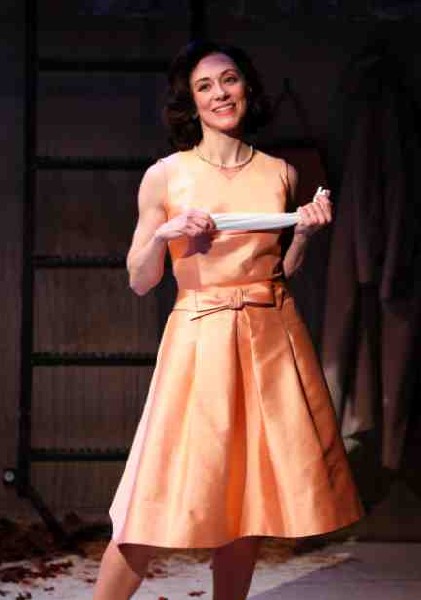 Tina Benko’s performance as Jackie in the play of the same name by Elfriede Jelinek, is a turn for the ages.  Beat by beat, swoop by swoop, dashes and arrested moments, Benko holds us in her sway.  Every surprising comic opportunity is subtly presented.

The set which looks like the sewers of Paris, announces strange territory and a novel take on Mrs. Onassis. The playwright uses her as an American princess, even though we don’t have royalty here.  Jackie enters this ugly, dirty purgatory dragging the dead figures of Jack, their miscarried children, Bobby and Ari bound up in silver duct tape.

It helps to know Jelinek’s work, which earned her a 2004 Nobel Prize.  She is interested in her words, where they fit in her pen and how they are sent out into the world.  Icons like hair figure prominently.  What is hair to you?  How does it represent you?  Is it you?

Jackie admits that she wore wigs.  She touches her hair often, refers to it as lacquered, and then talks about losing it to chemotherapy.  But always the hair is one of the visually iconic elements that define Jackie for her public and also keeps them at bay.

Much more is made of her clothing style.  Oleg Cassini is the only credited designer, perhaps because Valentino and Carolina Herrera, who Jackie wore beautifully in real life, are softer, more inviting.  Soft pieces of Jackie that simply do not exist here.  It is hard to remember that the real Jackie’s clothing was sexy after Mamie Eisenhower’s dos.  But deconstructing Jackie to hair and clothing is not a trope most Americans will recognize.

Because arcs are not what the playwright had in mind, Jackie’s final decades are ignored. There is a one time reference to her work as a book editor, and a wicked joke about her book life jumping off point: the Texas Book Depository.

Jelinek is obsessed with women’s use and misuse by men and how they survive abuse. The play clearly suggests that Jackie was instructed by Mom to marry a wealthy man. Kennedy was wealthy. He was also matinee idol handsome and an intellectual, a man who shared Jackie’s love of words, ideas and books. Their initial attraction was lodged very much in the words, which Jelinek reduces to ‘hair’ and ‘clothes’, words and ideas not often celebrated in poetry and classic literature.

John Fitzgerald Kennedy is a caricature.  Not a man who deliberately abused his wife, he could not keep his hands to himself and hurt his wife deeply. In fact, her multiple miscarriages are attributed to chlamydia which JFK transmitted to her.

Jackie was able to escape only when he died, his brain she so loved oozing on to her pink suit. Jelinek describes brain tissue as having the texture of clothing.

Benko gives us the car in the Dallas motorcade, that incredible body thrusting effort to escape the rear seat, which the Jackie character declares on stage she remembered not at all.

The evening on stage is incredibly compelling in the hands of Benko.  Could we have been better prepared for its culture shock?  We are in European theater, in the European mindset, not our own. The abstractions do not sit well with the Jackie I came to know slightly. Can I suspend my disbelief and accept Jelinek’s premises?

If you go with Benko, yes.  But I could have used a warning at the play’s beginning.  The author is trying to get not at Jackie’s essence, but at the essence of her effect. So too, Marilyn Monroe, a Barbie figure in the play.  Marilyn had Barbie’s curves, but was more pliant.  She was not married to Ken, but to two American greats, Joe DiMaggio and Arthur Miller.

Marilyn gets the big hair treatment, strands of her hair fell outside her coffin as she was lowered into the ground. It is difficult to believe that Jackie thought about Marilyn for a moment. But we are in an abstract land at City Center, in a production brilliantly directed by Tea Alajic.

This play is billed as part of a series on princesses and a take off on Shakespeare. Can you think of an American princess?  We don’t have royals, which is why we pump up celebrities.  In the modern age, we need to have people to look up to, even if they are as slight as Lady Gaga and Katy Perry. We may elevate but do not crown.

The cultural setting of this play does not allow for an arc. Miraculously, Jackie in real life was able to complete an arc and develop as a human being.

I remember most vividly two quotes from Jackie. Once, when discussing the ‘freak’ Truman Capote, she said, “I am a freak too.”  She did not want to be one and she wasn’t. The other quote shows just that: “If you fail your children, you flunk life.”

Jackie just wanted to work with books. She would wave her arms circling the bookshelves in her Fifth Avenue home and say, “These are my friends.”  At Viking and then Doubleday, she did her own Xeroxing. She also placed her own telephone calls. This made matters more complicated rather than simpler. The first call she would place, the recipient would inevitably hang up on her:  “Some joke.”  She would then call back persistently until she convinced the person that in fact it was Jackie.

When Maurice Templesman was out of town, she would call a friend and suggest going to a movie. They would eat Kit Kat bars for dinner. She loved a laugh and down to earth people. Jackie found a corner for her life in the last years in which she was really happy. Maybe this is what American princesses look like.

This production is wonderful. Director Tea Alagic keeps us fixed and fascinated. The play provokes in just the way Women’s Project Theater should. Yet the deep icons Jelinek chooses for our princess don’t sit well.  And it is ironic that the words Jelinek cares so much about are just what Jackie cared about more than anything. You would never know this from the play.

On stage Jackie is a wonderful, provocative evening of theater.