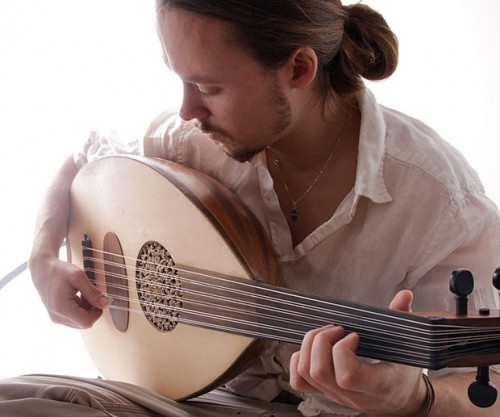 Jussi Reijonen will play oud at Regattabar in Cambridge.

Guitarist/oudist/composer Jussi Reijonen showcases music from his acclaimed CD Jussi Reijonen: un at 7:30 p.m. on Wednesday, March 5 at Regattabar, 1 Bennett Street, Cambridge. He is joined by an international array of players: Swedish acoustic bassist Bruno Råberg and Palestinian percussionist Tareq Rantisi - each of whom is featured on un - along with Spanish pianist Juan Pérez Rodríguez and Palestinian cellist Naseem Alatrash as special guests. Tickets: $18, $12 students. For more information go to http://regattabarjazz.com or call 617-395-7757.

Jussi Reijonen: un is, by any estimation, a true world music album. Bringing together seasoned musicians from Finland, Turkey, Sweden and Palestine, un traverses the boundaries between musical cultures, paying tribute to the traditions of American and Scandinavian jazz and the folk musics of the Middle East and Africa in its search for new sounds and textures. Reijonen's original music draws from a wide pool of influences and experiences gathered growing up in five different countries on three different continents; in both his original compositions and his playing, the open spaces and silences of Scandinavia effortlessly rub shoulders with the maqamat of the Arab world and the rhythmic richness of India and West Africa, creating a truly enchanting musical mosaic.

"Reijonen brings a pan-global perspective to the extraordinary music on his debut discŠ. his playing is deep and profoundly nuanced throughout. Reijonen's oud work is superb, but it is the ways in which he has applied oud techniques and sensibilities to guitar-particularly fretless-that are most likely to blow GP readers' minds. A spiritual atmosphere permeates this musicŠ" - Barry Cleveland, Guitar Player

"Šthe constant is Reijonen and his ongoing desire to combine jazz with world music. It's a desire that serves the Nordic improviser well on this promising debut."_-  Alex Henderson, Jazz Inside New York

"A remarkable crystallization of musical concepts and influences from the West and in the EastŠReijonen's musical universe has no frontiers. It is a beautiful, sensual mosaic of traditions and influences."
- Eyal Hareuveni, All About Jazz
"Un convinces on every level, and is therefore comparable to groundbreaking albums by pioneers such as John McLaughlin, Ralph Towner, Oregon and the like." - Ole Nerdrum, RYTMI magazine (Finland)

"Five stars. On his hypnotic musical sojourn, Un, Mr. Reijonen plays oud as well as fretted and fretless guitars. On all instruments he pushes the sound of each into a place no one seems to have taken either instrument before-not even [Pat] Metheny." - Raul da Gama, World Music Report

Born in Rovaniemi, a small town on the Arctic Circle in northern Finland and moving between Finnish Lapland, the Middle East and East Africa, Reijonen has spent his life soaking up the sounds of various cultures.  He studied music at the Pop & Jazz Konservatorio in Helsinki, as well as at Berklee College of Music and New England Conservatory in Boston where he received his master's degree from the groundbreaking Contemporary Improvisation Department.

Bruno Råberg is an internationally renowned bassist and composer. Since coming to the US from his native Sweden in 1981, he has made six recordings as a leader, about 30 as a sideman, and has performed with a wide range of world-class artists including Jerry Bergonzi, George Garzone, Sam Rivers, Billy Pierce, Donny McCaslin, Billy Hart, Bob Moses, Mick Goodrick, Ben Monder, Bruce Barth, Jim Black, Matt Wilson, Bob Mintzer, and John Medeski.

Born in Huelva, Spain, pianist Juan Pérez Rodríguez is well versed in the music of his homeland - his father is the flamenco musician and composer Juan Pérez "Sombra" - and his style exists within the interplay of that music with other styles. While a student at Berklee, Rodríguez founded the group Spain the Lighter, which presented a renovated and fresh vision of flamenco/fusion music. His first album, 2011's Fabulare, was a critically acclaimed fusion of jazz, flamenco and classical styles, and he is currently planning a follow-up. Rodríguez has also recently recorded with celebrated flamenco guitarist Vicente Amigo.

Cellist Naseem Alatrash was born in Beit Sahour, Palestine. He has attracted attention for his unique style, which results from his experience in both Arabic and classical music.  He is not only an accomplished classical musician but also an outstanding improviser in various styles, fearlessly broadening the horizon of the cello. Alatrash has performed in over 20 countries with some of jazz and world music's leading artists, including Ron Carter, Simon Shaheen, Leo Blanco, Cafe De Silva, Jorje Drexler and Alejandro Sanz. Alatrash has also recorded with Palestinian oud/violin master Simon Shaheen on his upcoming album and with multiple Grammy Award-winning flamenco guitarist and producer Javier Limón.