Atlanta's High Museum of Art Through May 12 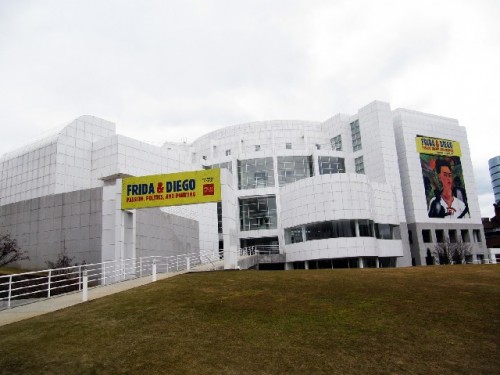 The Richard Meier designed High Museum of Art in Atlanta. 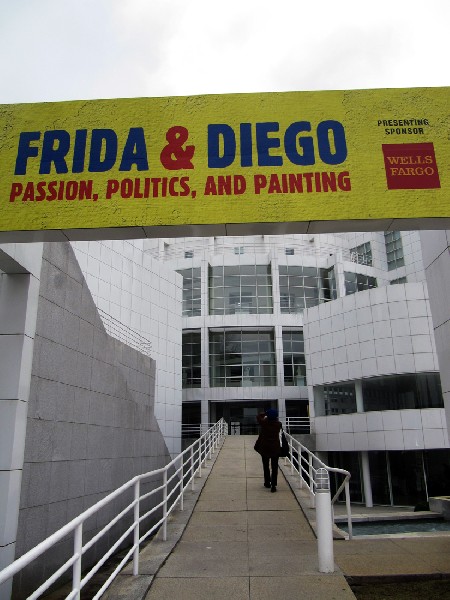 Gateway to the popular exhibition. 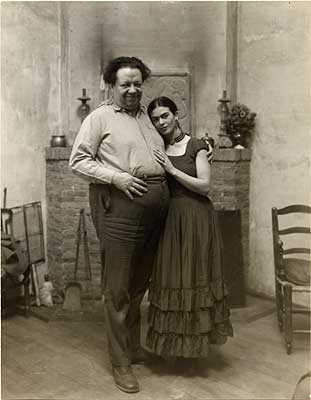 Diego was some twenty years older when they met. 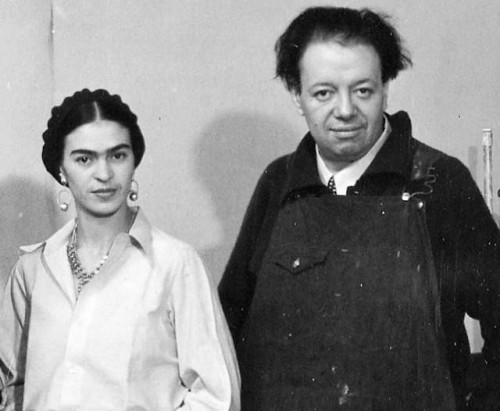 They had a complex and tormented marriage. 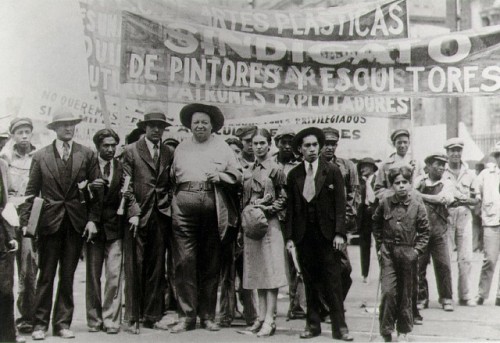 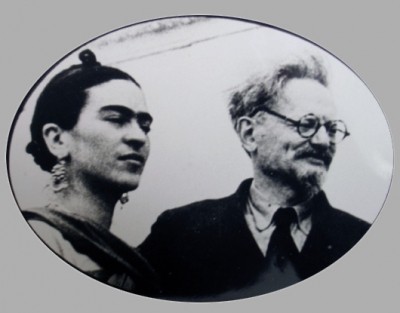 She had many lovers including Trotsky. 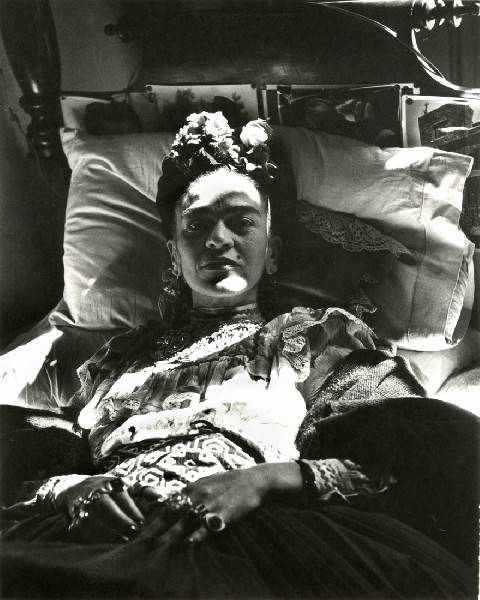 Confined to bed following one of many surgeries. 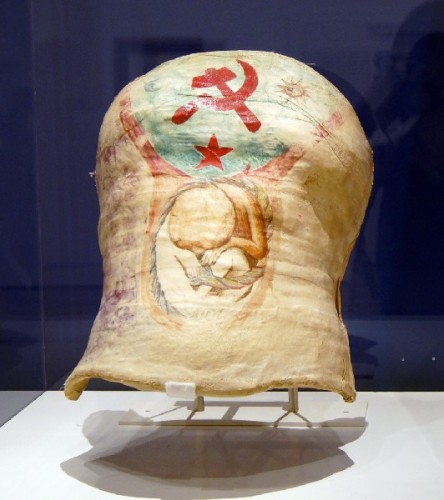 She decorated her plaster torso cast. 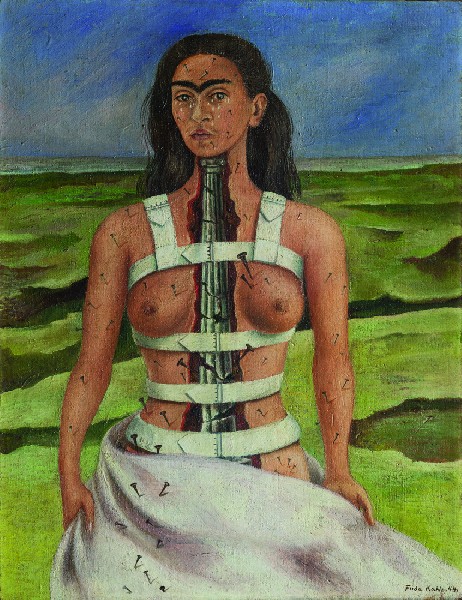 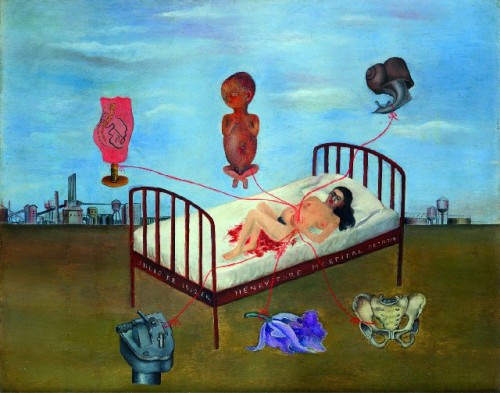 Tormented by a miscarriage. 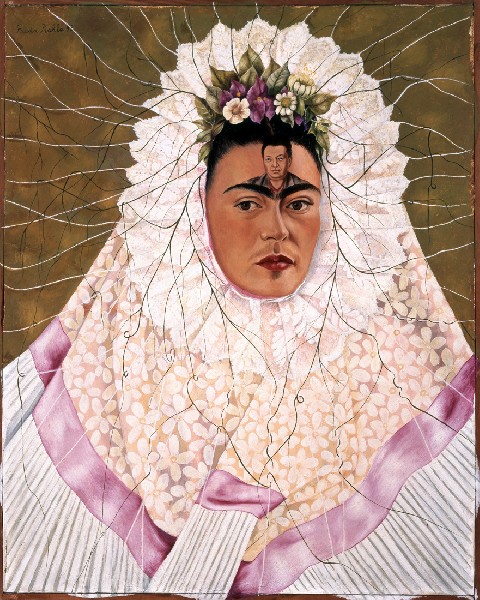 Diego on her mind. 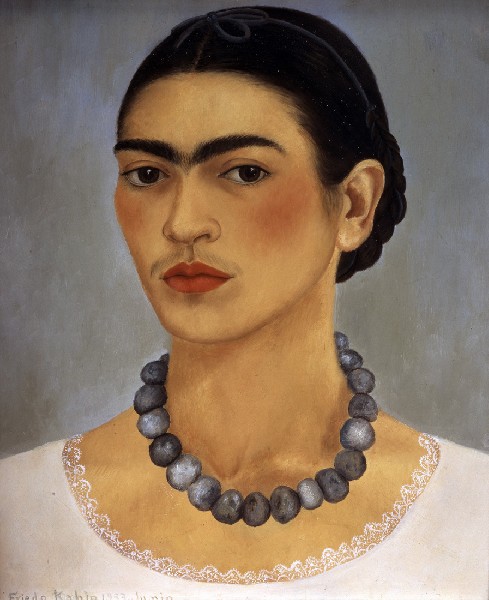 She mostly painted self portraits. 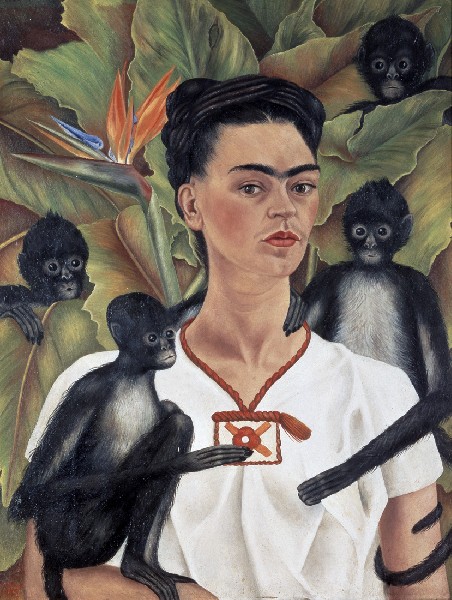 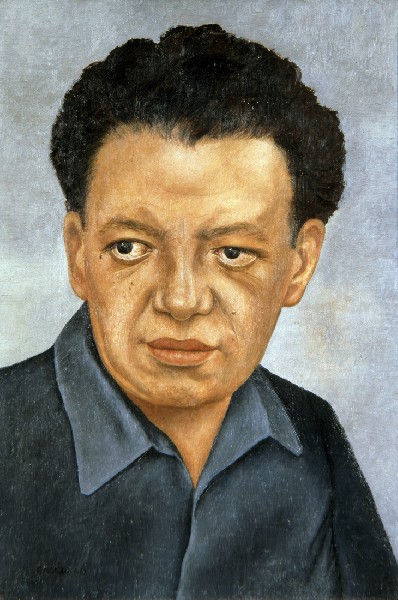 Her portrait of Diego. 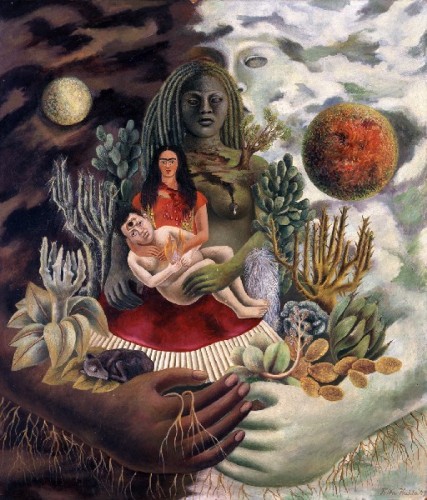 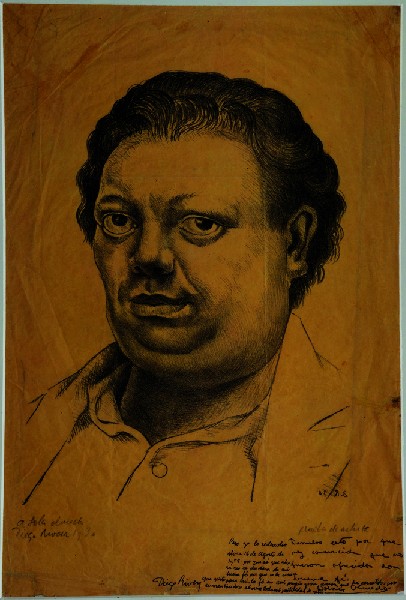 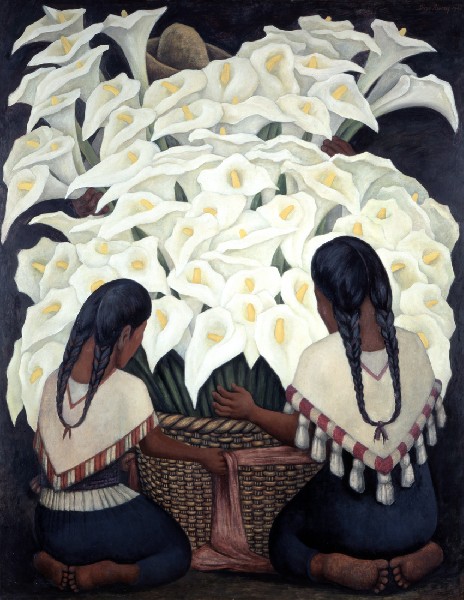 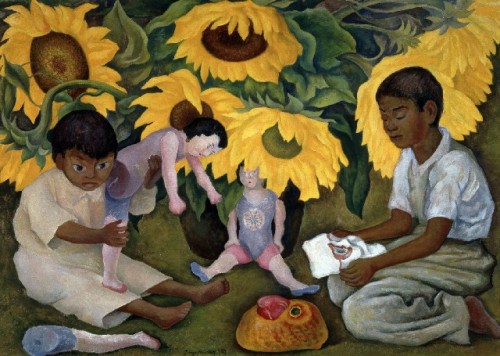 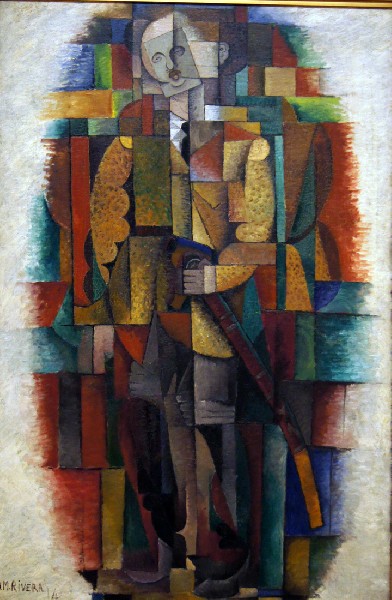 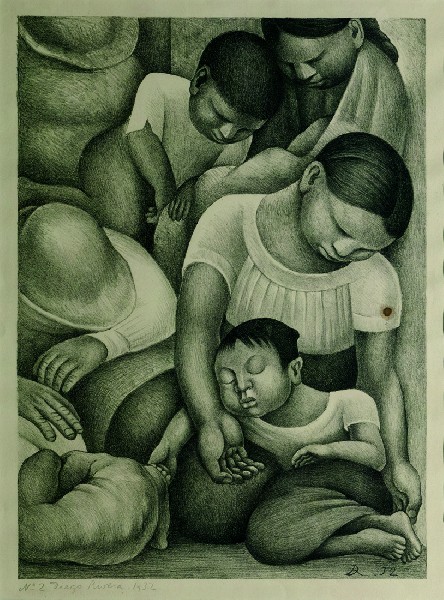 A study for a mural.

Man at the Crossroads was intended for Rockefeller Center. 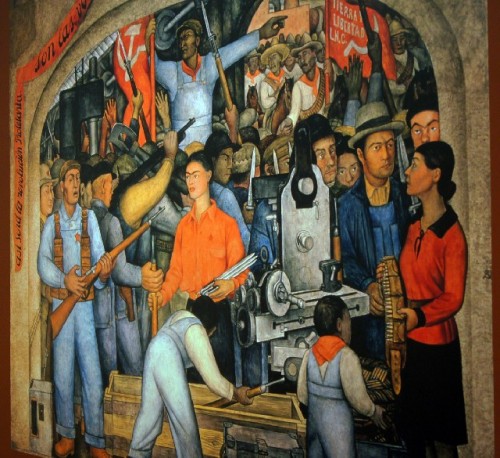 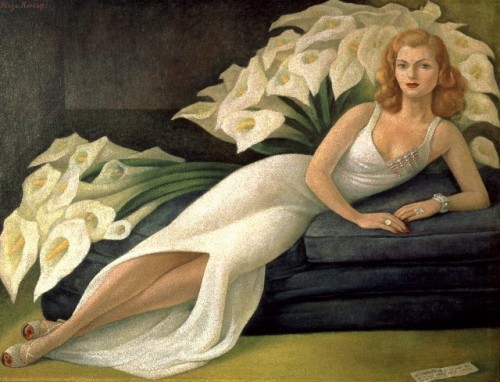 Portrait of his patron Natasha Gelman.

Frida and Diego: Passion, Politics, and Painting
Co-organized by the High Museum of Art, the Art Gallery of Ontario in Toronto and the Museo Dolores Olmedo in Mexico City, in association with the Vergel Foundation and the Jacques and Natasha Gelman Collection of Mexican Art, Galería Arvil, the exhibition is the largest ever of the couple’s work. All images © 2012 Banco de México Diego Rivera Frida Kahlo Museums Trust, Mexico, D.F. / Artists Rights Society (ARS), New York and the High Museum of Art.

Largely based on some 200 plus murals in Mexico City and several in the United States Diego Rivera (1886 to 1957) was among the most renowned artists of his generation. His second wife, Frida Kahlo (1907-1954) was a self taught painter, little know by the art world of that time. Of the 143 works she created before her death at age 47, some 55 were self-portraits.

By the 1970s her intimate, harrowing work, hammered on an anvil of physical pain, endless surgeries, and deeply wounded by Diego’s philandering, including an affair with her sister, Kahlo was discovered and embraced by feminist art historians. Her star has soared since then while his seemingly extinguished.

The magnificent exhibition Frida and Diego; Passion, Politics and Painting (on view through May 12 in Atlanta) is an epic effort to present them as equals. The grand special exhibition galleries of the High Museum of Art, a 2006 Renzo Piano designed extension of the Richard Meier (1983) building, affords generous space to view some 80 works and 60 photographs of the artists.

A truly measured and fair bilateral assessment of two legendary artists is challenging but not entirely feasible. For a true sense of Rivera’s art one must travel to Mexico to see the many murals. Their scale and context is crucial to their impact. This project attempts to provide a tantalizing glimpse by installing some superb, large scale reproductions of several of the murals. He is represented by drawings, prints and easel paintings which were not his primary focus.

The selection of mostly intimately scaled, emotionally charged paintings by Kahlo, however, offer a more representative impression of her best works. Those with a degree of exposure to her work will be thrilled to encounter a number of her most renowned and galvanic paintings.

Most visitors to the exhibition, its only United States venue, will encounter the legendary artists on a level playing field. Exit polls, however, are likely to favor Kahlo as the stronger and more interesting artist.

Part of that is the seduction of narrative in her work and empathy that favors her as the victim, a battered woman worthy of beatification, and he as an oafish, womanizing hammer bashing on her persona as anvil.

In reality they were closer to equal opportunity abusers. A deeper reading suggests that she gave as good as she got. Frida had numerous lovers including women and the renowned Marxist on the lam, Leon Trotsky.

On August 6, 1940 The Guardian reported “The attack was made upon (Leon) Trotsky by Franck Johnson, who is described as a French Jew. Trotsky, it is stated, invited Johnson to take afternoon tea with him and Johnson was therefore not searched, as are most people entering Trotsky's carefully guarded home in the city suburbs. According to the police Johnson had a small pickaxe, of the type used by Boy Scouts, hidden in his trousers. He is alleged to have attacked Trotsky suddenly, battering his skull and injuring his right shoulder and right knee. According to one of his bodyguards Trotsky's last words before he became unconscious were ‘I think Stalin has finished the job he started.’ “

Like many leftists of 1930s  Frida and Diego were ardent communists torn between the factions of Stalin and the more “liberal” Trotsky. They had a complex history with the Mexican Revolution of 1910 and its aftermath. At one point they were expelled by the party then rejoined after a break with Trotsky and a recommitment to Stalin.

There were conundrums and contradictions of their embrace of the agit/prop demands of their art as well as an ersatz solidarity with peasants, the proletariat, agrarian reform and the complexities of Zappatisme.

Although they were rich and successful they embraced the poor and uneducated masses. Diego depicted indigenous people in his murals while Frida defied her social class and economic status by dressing in traditional peasant costumes. Underneath which Frida wore the braces and plaster casts of her many surgeries.

One of these plaster torsos is displayed as a relic and artifact of her intense suffering. Propped up in a hospital bed Frida decorated the body cast with a large hammer and sickle as well as a fetus in the womb.

Inflicted with polio she was largely crippled in one leg. Later, a horrendous accident involving a bus on which she was a passenger, broke many bones in her body and pierced her uterus.

One of her most riveting paintings depicts the aftermath of a miscarriage. In a surrealist manner a number of icons float about the hospital bed tethered to her by ersatz umbilical cords.

Images of Diego haunt many of her paintings or invade them subliminally. The exhibition illustrates a tormented love story. A very famous image depicts her seated on a chair surrounded by her shorn hair. She is conveyed wearing men’s clothing and above her are musical notations of a popular song. The androgynous depiction derived from feeling deprived of her womanhood when she discovered that her husband was involved with her sister. They divorced as a result of the affair but later remarried.

Frida appears in his work as well but in a very different manner. She is presented as a Marxist revolutionary in one mural distributing guns to peasants.

On every level Rivera was overscaled. He was an enormous, obese, bug eyed, unattractive man. The charisma of fame, however, proved to be a compelling lure and aphrodisiac. He painted huge murals with strident, overblown political commentary.

To his detriment Rivera’s Marxist zeal was unquenchable.  At the urging of his wife, Abby, John D. Rockefeller commissioned a mural for the first floor of a then new Rockefeller Center in New York. The vast painting "Man at the Crossroads" presented the dichotomy of the rising threat of fascism and hope of a brighter future through socialism. Rockefeller demanded that Lenin be removed from the painting and was offended to find himself depicted as a martini drinking capitalist surrounded by loose women. In reality Rockefeller was a backer of prohibition.

When Rivera refused to make changes the work was finished then destroyed. The artist was paid in full and the mural was repainted in Mexico City. It is this version that is reproduced in the exhibition.

Now that we have passed through modernism and post modernism the agit/ prop of Marxist inspired art, and the social realism of the 1930s, have not aged well. With rare exceptions works that at the time were viewed as powerful and inspiring are later dismissed as strident, cartoonish efforts at propaganda. In a more complex and sophisticated world the ideals that Rivera espoused are simplistic and superannuated.

The casual visitor to this exhibition will likely respond to his easel paintings of peasant women and bunches of calla lilies as quaint, decorative and charming.

In the inevitable legerdemain of  this compare and contrast project Rivera will likely be viewed as the husband of the now more famous Kahlo.

From an art historical viewpoint the opposite is true. Rivera was the most ambitious, accomplished and successful Mexican artist of the 20th century. He cut his teeth in Paris and absorbed the lessons of cubism. Had Rivera remained he would today be regarded as a minor modernist and salon cubist. The examples of his School of Paris paintings in this exhibition are competent but enervating and derivative.

He was recruited by Jose Vasconcelos, Mexico’s Minister of Education (1921-1924) to make murals in public buildings. After a year in Italy to study fresco painting Rivera returned to Mexico and viewed Mayan ruins in the Yucatan. By 1921 he joined the communist party and embarked on his great work as a member of Los Tres Grandes with José Clemente Orozco ((November 23, 1883 – September 7, 1949) and David Siqueiros (December 29, 1896,  - January 6, 1974).

Through projects in the United States these three Mexican artists became a major influence on the WPA mural projects of the depression years. The scale and political content of the work was absorbed by the social realists. Their influence was also a factor in the transition from social realism to the emergence of abstract expressionism.

Significantly, the young Jackson Pollock was among a group of studio assistants to Siqueiros during a time in New York. Pollock was working through the influence of his teacher the American Regionalist, Thomas Hart Benton. There are a few surviving transitional works that strongly reflect the influence of the Mexican master and transition through a period of Jungian analysis.

The critics and theorists Clement Greenberg and Harold Rosenberg acknowledged the importance of the scale of Mexican mural painters, particularly Los Tres Grandes, in the “end of easel painting” the development of “all over painting” and American Type Painting.

But that’s not the agenda of Frida and Diego: Passion, Politics, and Painting. What we vividly encountered in Atlanta was a furious, tormented, illustrated love story. It proved to be a heart wrenching and indelible experience.