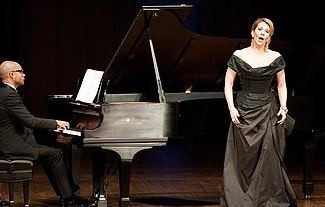 How happy Joyce Di Donato was to make her debut at Carnegie Hall, which she announced is a “temple” to music.  Di Donato, a generous performer of rich talent, was up to the challenge.  The hall articulates the voice at a whisper as well as full throttle.  This superb mezzo-soprano has specialized in Rossini, but she also performs in Handel, Strauss, Massenet and a favorite contemporary composer, Jack Heggie’s work.

In the Haydn’s Berenice, che fai, Di Donato plunged immediately into the fire – a difficult, beautiful, dramatic piece in which Berenice is overcome by anguish after the death of her great love.  Di Donato, as well as displaying rhythmic variety and a range of vocal texture,  shows the diva outside, draped in sparking jewels and a plunging black silk dress.  She is tethered to earth, a girl who studied education at Witchita State where constructing a singing program, from least difficult to most was not on the program.  The Haydn, a brave opener, was glorious.

The temple became a living room as Rossini songs followed.  Di Donato drew a picture of her sensitive and lyrical acompaniest David Zobel at the piano in Rossini’s parlor, friends eating and drinking as these songs were performed.  For all the excitement her performance elicits, it is intimate and full of personal feeling.

Cecile Chaminade, a French composer, was much admired by her better known contemporaries, not as a woman composer, but as a composer (this drew applause from the audience when it was revealed by Di Donato).  The songs are full of joy and love.  They are odes to singing, the most frequent phrase ‘chanter’,  and DiDonato often left her mouth open in surprise and wonderment after the notes had left.  A delightful punctuation.

An aria from Rossini’s opera Otello was nuanced, both shimmering and luscious.

Jake Heggie’s songs with lyrics by Sister Helen Prejean were a world premier. composed around themes of nature and its power and darkness.  Di Donato was surprised to find the Sister loves surfing and one theme in the set is not to fear the big wave breaking over you, but to ride with it, and you will come to shore.  The songs are filled with lyricism and arresting accents.  Throughout you could hear the uplifting echoes of Negro spirituals.  Each was a small piece of theater we have come to expect from Heggie. Melody, easy dissonances and unusual harmonies were all pleasing on the ear.

The delicious roles all related to Spain which concluded the program had me thinking of Carmen somewhere out their in Di Donato’s future. Already she has a robust chest voice and dark lower tessitura.

Di Donato surprised in her encore with an ambitious La Donna del Lago, sung with unusual quiet.  She then ripped into the cabelleta. Embellishing the line with a high b flat and then a c, before she dove into a c two octaves below.

What followed was a refreshingly simple Somewhere Over the Rainbow, which Dad, who was not a Judy Garland fan, said was not too bad after all after he listened to his daughter.  It was the last song he heard her sing.

Di Donato sees her role as breathing life into music, and surely in her Carnegie debut she did just this. She will appear at the Metropolitan Opera for Le Comte d'Ory and Ariadne auf Naxos