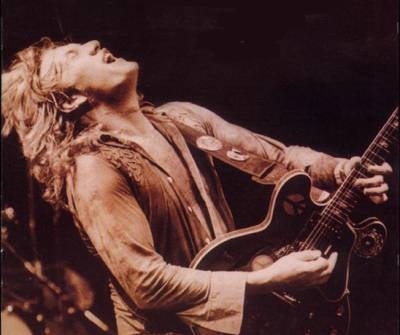 A 1970 gig by the late Alvin Lee inspired the first published example of Gonzo Journalism.

Alvin Lee the Adonis featured British rocker and leader of Ten Years After died in Spain on March 6 following complications from surgery.

During my former life as the pop and jazz critic for the daily Boston Herald Traveler a concert by the band at Harvard Stadium inspired the first published use of the word “gonzo.”

I coined the word just prior to the review while telling an anecdote to friends gathered in the Commonwealth Avenue basement apartment of the late William J. Cardoso then the editor of the Boston Globe Sunday Magazine.

Cardoso later appropriated the word which he passed along to Hunter Thompson.

Most accounts credit Cardoso and Thompson as coining the word which has evolved into the vernacular with millions of Google hits.

Recently, I discussed that evening chez Cardoso with another who was there, James Silin, of Maine. He confirmed recalling me tell the story which prompted Cardoso to ask “What was that you said Charles? Gonzo! What does that mean?”

To which I responded “Gonzo, as in over the fence, out of the park, home run. Outah here. Total gonzo.”

Cardoso famously wrote to Thompson informing him that he was "Total gonzo a gonzo journalist.” The letter appeared on the cover of the short lived magazine Scanlon’s.

Wikepedia "The term "gonzo" was first used in connection with Hunter S. Thompson by The Boston Globe magazine editor Bill Cardoso in 1970. He described Thompson's "The Kentucky Derby Is Decadent and Depraved", which was written for the June 1970 Scanlan's Monthly, as "pure Gonzo journalism." Cardoso claimed that "gonzo" was South Boston Irish slang describing the last man standing after an all-night drinking marathon. He also claimed that it was a corruption of the French Canadian word "gonzeaux," which means "shining path," although this is disputed."

Suspecting that Cardoso was up to no good I slipped the word into my review. Sam Hirsch, a total square and my Herald editor, asked “Gonzo. What does this mean Charles? It’s not in the dictionary. (It is now)”

I replied “Sam it’s a popular word with the kids.”

Somehow it slipped by the sharp eyed editors at the rim.

What follows is the text and date of that iconic review.

Of course Cardoso and Thompson are now long deceased but I defy anyone to produce an earlier printed use of Gonzo.

After the Herald review  Cardso convinced Globe cartoonist Paul Szep to publish an image with Gonzo as it caption. Szep came up with a wailing baby.

With Silin, and his then wife Cathy, we formed the Total Gonzo Band and had a public gig at the Plough and the Stars on Mass Ave in Cambridge. We didn’t have much equipment so Jim taped the mike to a broom handle taped to a bar stool.

In our gang it was gonzo this and gonzo that.

My deceased friend Barry Savenor got a Gonzo vanity plate for his Duster. When he threw somebody out of a party the dude danced on the roof of the car bashing it in. Barry later wrecked the car which was then as gonzo as the license plate.

Now it seems that Alvin Lee is also total gonzo.

Some 25,000 gonzo fans jammed the bowl end of Harvard Stadium, Wednesday, July 1 to hear their sex-rock idols, Ten Years After. The Schaefer Festival foams on with top rock.

Plagued by equipment failure, Moot the Hoople, the opening act, was off almost as fast as they went on and spent most of the evening brushing their hair.

Cheering the endless stream of crashers flowing in from the opposite end zone, the kids turned to amusing themselves with wine, chanting, grass and Frisbees. Rockets and fire crackers add to the frenzy. The scene in the stadium was worthy of Caligula.

Milling about during the long break the HT canvassed the ladies: Carol from Canada has never seen Alvin Lee before but has all his records. Pam from Newton was more emphatic, “Wow I just flipped out on him at the Tea Party.”

The men registered lesser emotions. Doug Haley was blasé, “Yeah, sort of but not terribly huge.” While Leonard, from Dartmouth, Mass. came all the way to see Alvin. David from Teaneck, N.J. was a touch bitter, “He’s just a male sex symbol.”

Forty five minutes later the PA limped back to life and Moot Hoopled back on for a number. Then more intermission while ushers attempted to clear backstage to bring out TYA.

Madhana a Krishna Consciousness member saw TYA at Woodstock and liked it then but finds that, “The sounds may be terribly pleasing but they are materialistic and everything is temporary. The more you chant the nicer it gets, Hare Krishna.”

At 10 p.m. after two hours of wine, reefer and Frisbee, TYA came on. With his red Gibson covered with peace symbol decals slung around his neck, Alvin Lee puffed on a cigarette. Ever-Adonis-like, under a sculpted mop of blonde hair, Alvin wore a flowered cowboy shirt and jeans. From his belt a motel key dangled suggestively.

The opener “Move Like a Mountain” brought surges of recognition. Floating on the rock solid rhythm of beak-nosed bassist, Leo Lyons, the diminutive organist, Chick Churchill and Alvin’s brother Ric on drums, Alvin launched into the furious note clusters which have earned him a rep as the fastest guitarist in rock. It’s all in the vibrato, however, which gets more from a chord.

The girls swooned for Alvin’s “School Girl” with the suggestive lyrics. Following with “Spoonful” was almost too much. Then Alvin, Chick and Leo went off for a cigarette leaving Ric thumping through the drum vehicle “Hobbit.”

Scat signing effectively Alvin twists his jaw and pouts the lyrics through pursed lips mouthing the mike. After the vocal break Alvin rocks back to trade licks with Leo, humorously parodying the style of Chuck Berry with fake dance steps. TYA is often faulted for not being very original but who cares when they rock through “Sweet Little Sixteen” or “Blue Suede Shoes.”

Abandoning the organ, Red Sox shirted, Chick Churchill mounted an amp to lead the audience in a wild clapping finale. And the fans swarmed the car as a police escort drove TYA back to the motel.