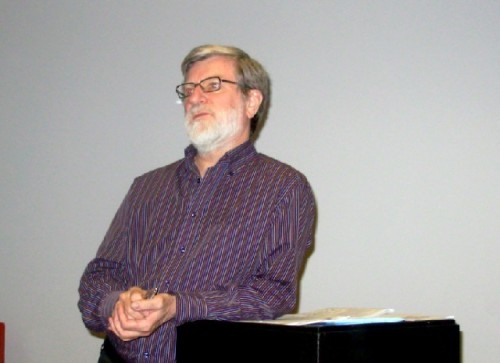 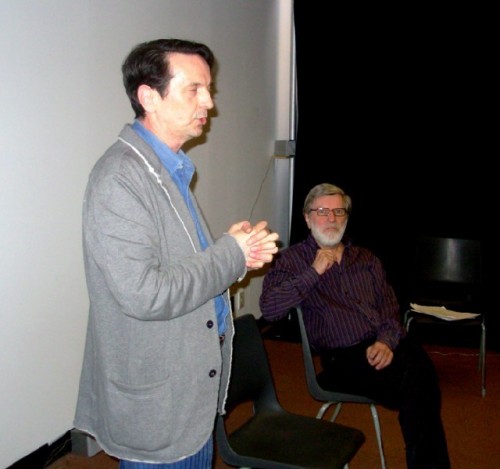 PR and marketing director Pierre Pilotte greeting the media during the Biennale. 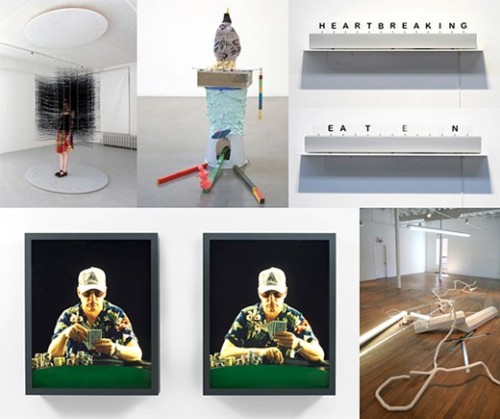 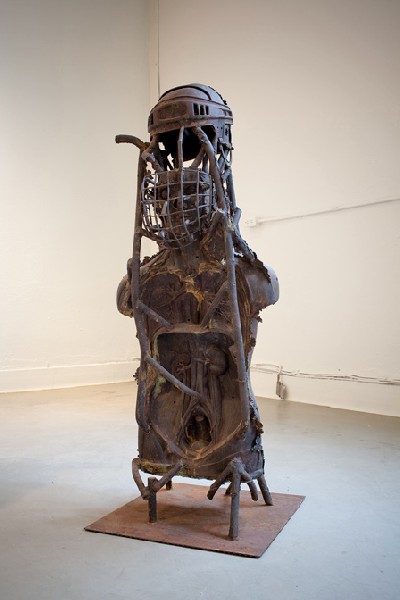 Sculpture by Daniel Spoerri in 2011 Biennale/ 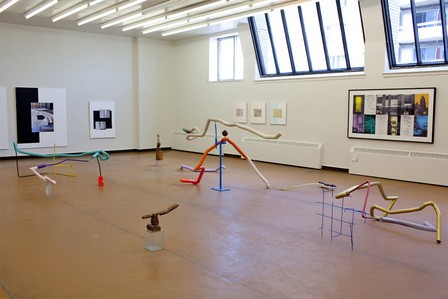 A room of works by Ian Wallace and David Armstrong in the 2011 Biennale. 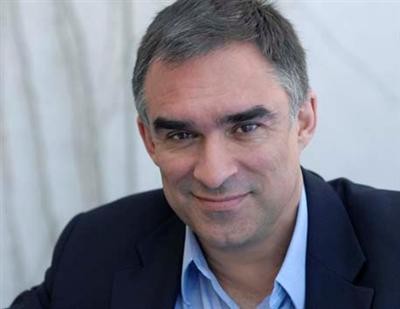 Director Marc Mayer revived the Canadian Biennial for the National Gallery in Ottowa. 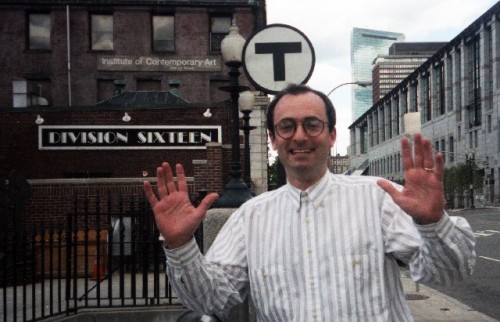 Matthew Teitelbaum while with the ICA in Boston. Giuliano photo. 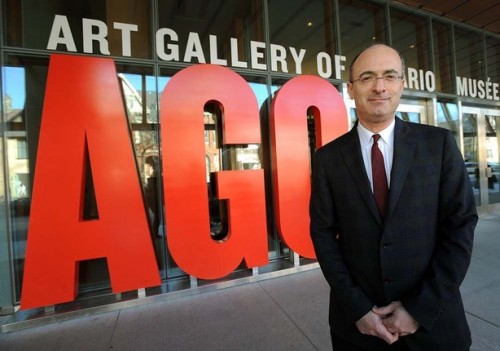 Today Teitelbaum is the director of the Art Gallery of Ontario in Toronto.

Charles Giuliano When we came to your 2009 La Biennial de Montreal project it was difficult to understand and comprehend but very well defined. It was a lesson in new media and current approaches.

Claude  The last one was about the presence of Chance through John Cage, Daniel Spoerri, most of the artists of Fluxus, and the uses of Chance today.

(“Curators Claude Gosselin and David Liss couldn’t have settled on a better theme for the 2011 Biennale de Montréal than their “Elements of Chance.” Taking a cue from French poet Stéphane Mallarmé’s free-form text construction Un coup de dés jamais n’abolira le hazard from 1897 (it translates as A throw of the dice will never abolish chance), the duo have crafted a curatorial gambit that ranges in time and temperament, from the unsettled complications of modern history to the dominant social and political hazards of today. Unpredictability, improvisation, risk and randomness are binding concerns throughout the exhibition, which gathers works by more than 30 national and international artists at the former École des beaux-arts building in downtown Montreal. As Liss writes in an accompanying text: “Even as we may be conditioned to avoid risk we dwell within a culture of uncertainty, of forces and factors relinquished to chance.” He continues, “The fortune teller and the stockbroker are one and the same.”

“Yet, in their play on chance, Gosselin and Liss have perhaps inadvertently hit on another more long-standing theme of the Biennale de Montréal—the fact that over the years the event itself has always been a bit of a gamble. That’s not a knock to the efforts of Gosselin, an enduring fixture on the Montreal art scene who, as the director of the Centre international d’art contemporain de Montréal, has helmed the biennale since its first edition in 1998. With its influx of contemporary artists from across the country and the globe every two years (or so) and a related program of talks, films and web-based works, the biennale is always highly anticipated and hotly discussed. Even amid new competition from the Musée d’art contemporain de Montréal’s Quebec Triennial and a possible biennale run at the National Gallery of Canada, the Biennale de Montréal remains a cornerstone exhibition both locally and nationally…” Bryne McLaughlin, Canadian Art, May 19, 2011)

When I was in Tate Modern I was confronted by a room full of work inspired by elements of chance after I had selected the theme for the Biennale.  It was amazing to see this about the idea of chance. When I first sent out information about the chance theme for the Biennale people laughed at me. The history of art is full of examples of artists using chance. As a way of developing their own works.

I think the museums instead of showing individual artists should be working more and more with group exhibitions. Thematic exhibitions. So then people will understand what its about.

CG What became of the Canadian Biennial which we saw at the National Gallery in Ottowa in 1989? We assumed they would continue, which was announced at the time, but they didn’t.

Claude They didn’t. Xerox was the sponsor. They were supposed to be the sponsor for the next two. Because of the response they decided to retreat. Our Canadian government and The National Gallery decided because we don’t have the money for it so they just decided no more Canadian Biennials. So we had one. That year. Then Marc Mayer left the Montreal Museum of Contemporary Art to become director of the National Gallery and decided that we would have a new Canadian Biennial in Ottowa (November 5, 2010 to April 24, 2011).

(“…The NGC waded back into biennial territory with the exhibition “It Is What It Is: Recent Acquisitions of New Canadian Art.” Framed as a “Canadian Biennial,” the show consists of more than 70 works by Canadian artists that have been added to the gallery’s permanent contemporary art collection over the past two years. While disputes are bound to arise over which artists have or have not been included, on the whole the exhibition offers a clear and impressive picture of the wide-ranging trajectory of contemporary Canadian art. It’s also firm proof that NGC curators Josée Drouin-Brisebois, Andrea Kunard and Greg Hill are doing their due diligence in tracking and lobbying for the acquisition of works from some of the most exciting artistic practices across the country…

“Set alongside the exhibition’s overarching biennial pitch, it has many in the Canadian art public asking, What exactly are the responsibilities of a so-called national biennial exhibition in terms of representative scope and critical curatorial direction? Or rather, if the exhibition “is what it is,” what exactly, then, is “it”? These questions sat at the core of the symposium Conversations About Contemporary Canadian Art, organized in conjunction with “It Is What It Is” and hosted by the NGC on November 19. The first panel, Canadian Art Practices at Home and Abroad, brought together American curator Denise Markonish (who is currently researching an omnibus exhibition of contemporary Canadian art to show at MASS MoCA in 2012), First Nations curator Ryan Rice, and Vancouver artist Ken Lum to examine notions of nationality in a transnational age. Markonish offered a wrap-up of her regional travels and her observations on the general lack of acknowledgement of Canadian art in the United States, despite, as she noted, the comparatively diverse dialogues and art practices she’s found, particularly among First Nations artists. That segued nicely into a presentation by Rice, who from the start defined his work and the work of many well-known First Nations artists as independent of Canadian identity. This point stands in striking contrast to widely accepted ideas of an all-inclusive, multicultural nationalism and offers important insight on the positioning of First Nations contemporary art. One wonders, however, how many of Rice’s fellow First Nations curators and artists share this dramatic stance of refusal. If, as Rice suggested, many aboriginal artists are primarily concerned with recuperating their identity through works that challenge the “Indian” stereotype, then is there not a danger of creating yet another stereotype of a protracted identity crisis? Do First Nations artists wish to be indelibly recognized as such, or as artists whose work comes from but is not dependent on that troubled history? Lum's take on the inconsistencies of nationalism ranged across borders and philosophies, but what struck most was his citing of a statement by Marshall McLuhan which suggested that perhaps what makes Canadian national character unique is the fact that it resists definition. It is this flexibility that sets us apart and that has prepared us for an age of expanded global identity. Lum also pointed to the legacies of colonial ethics, weak teaching structures and an official political and cultural discourse long dominated by central Canadian views and values as, he said, “paradoxes that cannot be resolved except by collapse…” Bryne McLaughlin, Canadian Art, November 25, 2010)

So there has now been a second one. But it is a Biennial showing the works that the National Gallery has been buying for the last two years. So it’s not really a Biennial in the way that the Whitney will look at what’s going on. No. It’s the collection of works of art during the last two years. Mayer is a French Canadian artist from Ontario.

Claude Yes. He is very active. He was at the Brooklyn Museum before as the Deputy Director. From there we went to the Montreal Museum of Contemporary Art and now the National Gallery. He has an agenda of becoming director of a major museum in the States. He didn’t stay more than three years at most of the jobs he’s had in the past. So he is probably already looking at being somewhere else in the next two years.

CG How is Matthew Teitelbaum doing? (We knew him when he was a curator at the Institute of Contemporary Art Boston under Milena Kalinovska.)

Claude He’s a good man. He’s doing well developing the Art Gallery of Ontario. He had to fight for money because they just enlarged the museum and that cost a lot. Because of the recession the money was lacking. So he had problems with hiring and dehiring people. It is a museum that does well now I would say. He did a major exhibition with Betty Goodwin.

CG If you opt not to continue with La Biennale de Montreal what are your plans for Centre international d'art contemporain de Montréal CIAC? Between Biennales you have always threatened that it was the last one.

Claude Yes. But that comes to an end. That comes to reality now. I have told the board of directors and the funding agencies that I am no more involved with the Biennale. I’ll be there as a consultant if they want me. But I’m not going to be a part of the administration or acting as a curator. I want to keep CIAC alive because it’s a good locomotive for working in the arts in Montreal. Now in Canada it is becoming difficult for new arts organizations to get non profit status. I spoke with someone recently who told me they are working for a year and a half now. It’s good to keep this organization alive. To keep it open to young curators or myself. For smaller exhibitions of individuals. No more group shows. We’ve done enough. Now we have to work on sending out the good artists we have to major institutions with major works. In Canada now there’s a good spirit toward that. We discovered that we have a little market and now we have to work on the exportation. They’re putting money into international projects. So I’m planning to work in that line. We wish to make CIAC available to curators who have different projects.

CG Are you training the next generation to take over and continue CIAC?

Claude This is something I would like very much to happen. To have someone come and say Ok I’ll do the same as you did. Not with the long term promise of salary. But I’m coming to take over this organization. To take it to the next step and the future. I would like to make sure that this institution could live. It needs someone with ideas from the beginning. As I’m saying to you where do we stand today with a traditional visual arts tradition with the new generation coming up? If we want it to be significant it has to be someone who is actually knowledgeable about the real situation in the visual arts. Otherwise it’s going to be an exhibition room with no public.