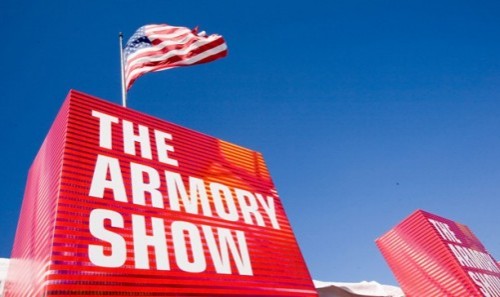 The annual Armory Show is the largest event of the numerous art fairs. 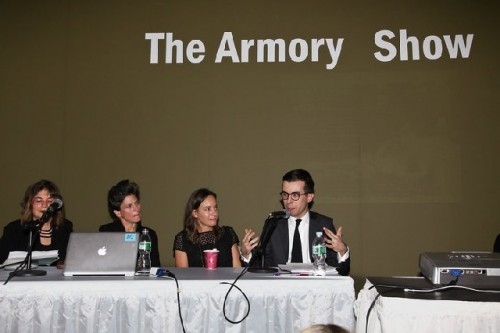 A panel discussion during the Armory Show. 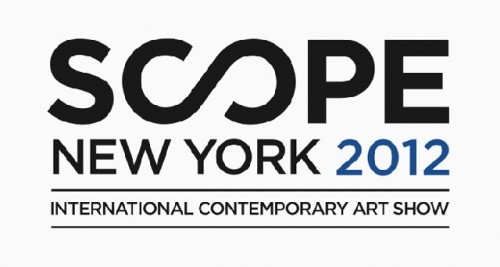 Scope is a lively art fair. 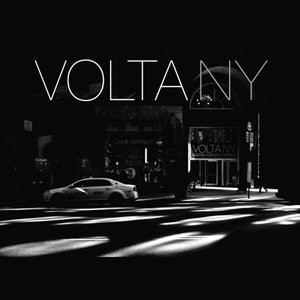 The New York Armory’s inclusion of a Scandinavian focus section at this historical moment is a propitious act that will provoke thoughtful debate and critical discussion. What does a predominantly privatized art world in New York stand to gain from mining its relationship to the largely state funded arts in Scandinavia? This year’s Open Forum discussions present dialogs between New York and Scandinavian based artists, art historians, curators, critics, directors and dealers to draw on the distinctions and affinities between these distinct cultural bodies to address this very question.

The talks will bring to light the socially engaged artistic, curatorial, writing and administrative practices that the two geographic regions share. The construction of value in the arts, it's relationship to gender, as well as alternative models for exhibitions will serve as sites for questioning the structures of funding, modes of dissemination, venues for journalism and spaces assigned to curatorial practice in each instance to uncover the ways in which a deeper understanding of each situation may enlighten the other. All talks will take place in The Wall Street Journal Media Lounge on Pier 94 or at the VOLTA NY 7W Talks Lounge. For more information: http://www.thearmoryshow.com/programming/open_forum.html

How do the divergent models for funding socially engaged artistic practices in the New York and Scandinavian art worlds influence the kinds of practices and projects that are produced in each context? Chelsea Haines, Manager of Education & Public Programs at Independent Curators International, will moderate a conversation with Dorothée Kirch, Director of the Icelandic Art Center; Anette Østerby, Director of the Danish Arts Council; Laura Raicovich, Director Global Initiatives at Creative Time; and Lisa Rosendahl, Director of Iaspis, the Swedish Arts Grants Committee’s international program for visual arts, design and architecture to consider the effects of these funding structures and address the issue of sustainability and urgency for supporting public art in the current economic climate.

The Shape of the Monster—Asger Jorn and Internationalism

A founding member of COBRA–the Scandinavian predecessor of the Situationist International–the long reach of Asger Jorn’s practice as one of Denmark’s most influential painters is still palpable in Danish art today. The Danish art historian Niels Henriksen, will moderate a panel with art historian Maibritt Borgen, of Copenhagen; Karen Kurczynski, Lecturer at Northeastern University; and Sarah K. Rich, Associate Professor of Art History at Penn State University; to map out Jorn’s relationship to and reflection on political and social issues of his time and how these may illuminate the state of contemporary culture in Scandinavia, and more broadly in the United States and beyond. (Co-organized with Niels Henriksen)

Bjork, the Icelandic doyenne of progressive pedagogy, performance, and musicality; has spent the past 2 years developing the songs and technologies that constitute her most recent endeavor Biophilia, a multimedia exploration of music, nature and technology. She will speak with Ragnar Kjartansson, the representative of Iceland in the 53rd Venice Biennale in 2009 and recipient of the prestigious Malcolm Award at Performa 11 last November, whose performances unsettle the iconic status of cult cultural events–Classical music, Italian figure painting and American Blues–by suspending them in the moment of their somatic pleasure. The two will speak this afternoon about the role of repetition, authorship and iteration that arise in their respective practices.

In Swedish artist Anna Lundh’s Front-time Reworkings #1 she traces the paths of Barbro Östlihn’s and Öyvind Fahlström’s lives and artistic working methods in downtown Manhattan in a contemporary temporal parallel. Similarly, pursuing a firsthand encounter with the spaces that stirred his artistic predecessor, Robert Smithson, New Jersey born Bryan Zanisnik’s Beyond Passaic photo essay tells a personal history exploring the state’s Meadowlands, a toxic swamp adjacent to Passaic. Both projects take up a question of what is knowable from an empirical engagement with the space by mapping their own experiences onto these sites of inspiration in a contemporary moment.

A Surrealist Proposition for Contemporary Alternatives

In 2009 Mark Beasley opened Plot /09: This World & Nearer Ones on Governors Island, a former army base off the southern tip of Manhattan. This same year Finnish curator Taru Elfving began planning the Contemporary Art Archipelago(CAA) exhibition on the Turku Isles–a network of 20,000 islands stretching out into the Baltic Sea. Today the two curators will speak with two of CAA’s artists–Nomeda & Gediminas Urbonas, who represented Lithuania in the 52nd Venice Biennale in 2007–about the ways in which the spatial and temporal remove of Governors Island and the Turku Archipelago affects our modes of perception and shapes the kinds of experience we construct and desire.

White Noise in the Visual Field

The proliferation of information–its sources and their ubiquity–obfuscates our experience of everyday life. It is common rhetoric that we now know more than any age before us, so what does it mean to produce knowledge under such conditions? Danish artist, Marie Kølbæk Iversen will speak with New York-based artist Ned Vena about the affinities their work shares–as video installation and painting respectively–with Minimalism and vandalism, and the fundamental question of information overload.

Does the focus on social, contextual and political discourse in art criticism today occlude a critical attention previously given to individual artist’s practices and exhibitions? Does this point to a critical abandonment that could, if exaggerated, leave solo exhibitions and non-thematic museum shows in the hands of fashion magazines, blogs and celebrity discourse? Erlend Hammer, editor of Norwegian based arts journal Kunstkritikk, will moderate a conversation with the Norwegian-based writer, Pernille Albrethsen; Brooklynbased editor and writer, Claire Barliant; New York-based writer, Blake Gopnik, of Newsweek magazine; and Assistant Professor at Pratt Institute, Eva Diaz to consider how these shifts may effect the way we remember and engage with contemporary art. (Co-organized with Kunstkritikk)

Straw into Gold—Journalism and Valuation in Contemporary Art

What is the agency of contemporary criticism in the art market today? How does a critic’s authorial voice shape the trajectory of artists’ careers? Margaret Liu Clinton, Blind Spot Magazine’s Contributing Editor-At-Large, will moderate a conversation with Norwegian-based writer, Magnus Bons; André Gali, editor of the Norwegian arts journal, Kunstforum; and Brooklyn-based curator and writer Stamatina Gregory to discuss the role of contemporary journalism in the arts and its relationship to valuation.

Is the model of a non-collecting exhibition hall, unmoored from a permanent collection but sutured to a cultural and contextual history, a boon or a hindrance for exhibition programming? How do collecting institutions evade reification through their exhibitions while shaping and adapting to shifts in cultural identity? Jacob Fabricius, Director of the Malmö Konsthall, Sweden will moderate a discussion with Kati Kivinen, Chief Curator of the Museum of Contemporary Art Kiasma in Helsinki, Finland; and Gunnar Kvaran, Director of the Astrup Fearnley Museum in Oslo, Norway, and Curator of the 2013 Lyon Biennale; to consider these questions as they relate to their respective institutions.

The iterability of Danish artist Lilibeth Cuenca Rasmussen’s self presentation is central to her practice, throwing light on the cultural coding and constructedness of our physical and affective identities. By using her body as an emoting vehicle to work through the issues of race, culture, religion and gender Cuenca sets out a unique set of parameters to limn the resonating effects of identity politics. This afternoon she is speaking with art historian Linda Nochlin, Lila Acheson Wallace Professor of Modern Art, Institute of Fine Arts, New York University, about her recent projects.

The Efficacy of Art to Incite Structural Change

The coveted national healthcare and social programs that support the political institutions of Denmark, Finland, Iceland, Norway and Sweden would be a welcome antidote to the concerns expressed by the artists Theaster Gates and LaToya Ruby Frazier. Invested in the transformative power of history and aesthetics Gates and Frazier’s practices each point to the imbricated nature of environmental injustices, healthcare and class operative in the United States today. Curator and art historian Sarah Lookofsky will moderate a conversation between Gates, Frazier and the author of Naked City, Loft Living, and Professor of Sociology at Brooklyn College and City University Graduate Center, Sharon Zukin, to consider these issues and the role which artists play–wittingly and unwittingly–in the cultural, social and economic constitution of a city.

The concern that models of critique–social, institutional and otherwise–are infinitely recouperable is a common stumbling block for those desiring social and cultural change today. When changes are lived and new relationships embodied through discourse and praxis does this not leave a trail of intractable proof of change? New York-based critic and curator Cora Fisher will moderate a conversation with freelance journalist and contributor to the project Osloo Maria Kjær Themsen; Berlin/Reykjavik-based curator, Birta Gudjonsdottir; Art Editor of BOMB Magazine’s online journal BOMBlog, Legacy Russell; and Helsinki-based curator Aura Seikkula to talk about how the arts are–currently and historically–deployed to spur tactical changes for the New York and Scandinavian contexts.

“Commercial activity is often associated with prostitution and non-commercial ctivity with true love,” according to curator and cofounder of Copenhagen based artist run gallery IMO, Toke Lykkeberg. What is relevant and useful about the way that such a statement situates IMO and the Brooklyn and Berlin based curatorial collective Cleopatra’s whose gallery models stake out new meanings for alternative, non-profit and non commercial galleries? Bridget Donahue and Bridget Finn, founding members of Cleopatra’s Brooklyn Berlin will speak with Toke Lykkeberg and IMO founding artist Torben Ribe to talk about the ways in which their respective projects navigate the juggernaut of these categorical concerns.

In 2004 Danish artist Nanna Debois Buhl worked as one of the four editors in the collective Women Down the Pub, with contributions from Sanne Kofod Olsen, Director of the Museum of Contemporary Art, Roskilde, and Copenhagen-based artist Ann Lislegaard. Together, they produced VIEW feminist strategies in contemporary Danish art, a text that traces and rewrites the terms of feminism in Danish art history from the 1960s to the present. New York-based art historian Jen Kennedy and artist Liz Linden similarly work to resuscitate activist strategies of consciousness-raising to ensure that feminism does not regress to a sedentary discursive state. New York-based writer and curator Amanda Parmer will moderate a conversation between the two groups to parse these histories for their individual successes that could be used towards a greater collective velocity.

How can we name and use identity categories to promote a more heterogeneous and more equal art scene? Litia Perta, Faculty at the Language and Thinking Program at Bard College, will moderate a conversation with Hanna Wilde, Director of the Swedish headquartered Högkvarteret; as well as artists and part of the Swedish-based YES! Association Åsa Elzen and Malin Arnell; Clark Solack: curator, writer and co-editor of RANDY; A.K. Burns: artist and co-editor of RANDY; to talk about the transatlantic queer and feminist communities that underpin their practices; as well as the stakes, struggles and successes in each instance.

Demystifying Dominant Narratives on TV in New York and Norway

From 2005 to 2006 Norwegian artists Sara Eliassen and Lilja Ingolfsdottir wrote and directed six “anti-commercials” entitled Not Worth It (No: Handlefri) that were subsequently aired on Norwegian television. For New Yorkers acclimated to a critical consideration of mass media’s message this project draws allusions to Paper Tiger Television’s project–a DYI public access cable collective whose aim over the past thirty years has been to expose and challenge the corporate control of mass media. In this conversation artist and member of the PTTV video collective Maria Juliana Byck will speak with Sara Eliassen about their divergent aesthetic practices and the type of efficacy engendered in each.