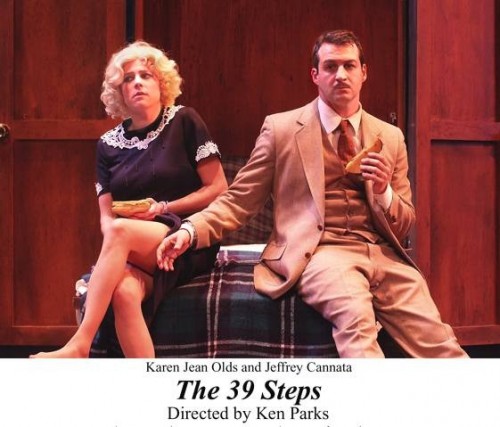 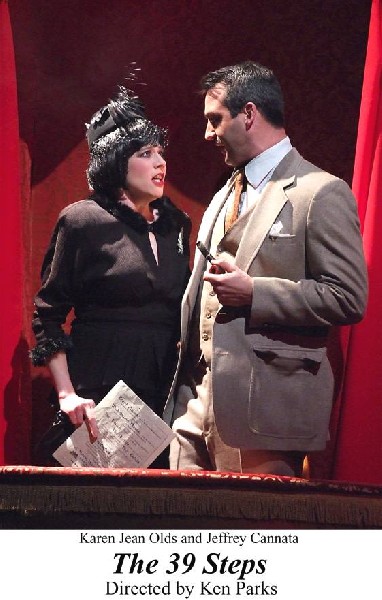 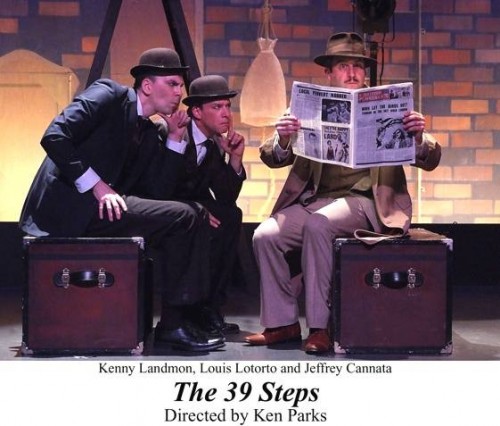 The terrific comedy production “The 39 Steps”, brilliantly directed by Ken Parks; produced and presented by Coyote StageWorks, of Palm Springs, and The Norris Theatre of Palos Verdes, CA, through March 9, is often referred to as hilarious, zany, and an a inspired collision of comedy and parody at its finest.  Newspaper ads often bill the show as “Hitchcock meets Monty Python” wherever it plays, and rightly so.  The stage production owes it genesis to the 1935 British spy-thriller movie directed by Alfred Hitchcock that starred Robert Donat as Richard Hannay and Madeleine Carroll as Pamela.

When the current stage version of “The 39 Steps”, written by Patrick Barlow, opened on Broadway in 2005 following its West End run, no one could have foreseen its popularity and acceptance as a blockbuster parody/spoof.  The Broadway show ran for 771 performances.  I saw it in 2009 and was blown away by the sheer audacity and brilliance of its high concept story and play script.

The production, then as now, features just four actors:  One plays the lead role of Richard Hanny (the Robert Donat role) and one female actor plays the Madeleine Carroll part, plus two additional female roles.  The other two male actors portray the remaining 100 plus characters in a tour de force of split-second timing, and jaw dropping performances worthy of Chaplin and Keaton in their heyday.  It boggles the mind to see their efforts carried off so cleverly and so inventively.  It’s a production that is blessed with a talented and highly creative ensemble cast that continually amazes the audience with one hilarious scene after another; all the while being technically faithful to the movie and its core story.

So then, who are these fabulous actors who are breathing such life into their roles on the stage of the Annenberg Theatre, in Palm Springs?  Let’s start with Jeffery Cannata as Hannay, the handsome, dashing, visitor from Canada who is wrongly accused of murder and is on the run from Scotland Yard.  He must avoid capture and find a master spy somewhere in Scotland who is planning to escape to Germany with stolen plans for a secret weapon.  Sounds pretty thin plot-wise but in Cannata’s talented hands it’s all just a piece of cake. Can he and will he save the day, foil the spies and win the girl? You bet he will, and he does it with style, wry wit, and grace.

Lovely Karen Jean Olds plays Annabella a Marlene Dietrich-like German woman in the opening scenes, then Margaret, a Scottish lady who befriends Hannay as he escapes his German pursuers in the Highlands, and finally as Pamela, (the Madeleine Carroll role) the young woman handcuffed to Hannay for half of the play.   Olds is the possessor of wonderful comedy timing skills and a displays a specialty for farce.  As Pamela, she also steals Hannay’s heart in the bargain, lucky fellow.

Louis Lotorto as Clown # One, is a veritable gold mine of accents and characterizations.  English, Scottish, German.  Men and women, you name it, he plays them all and he does it with lightning-like speed just as he does with his costume changes, sometime playing two different characters in the same scene.  Don’t ask how he does it.  Just enjoy what can only be appreciated by seeing it.  It’s not accomplished with smoke and mirrors. It’s just sheer talent that gets the job done.

Kenny Landmon as Clown # Two, is an actor with the comedy and farce skills of Lotorto, with the exception that he is a head taller, but just as accomplished in the accent department, and he too plays both men and women roles.  The on-stage energy generated by Landmon and Lotorto is enough to light the entire Coachella Valley.

I had the opportunity to chat with the cast following the opening night performance.  Both Lotorto and Landmon both confessed to drinking a large bottle of Gatorade during the intermission at each performance as a way of restoring the fluids and energy that drains them in Act One and prepares them for the madcap antics of Act Two.

Behind every great production is a director.  They are individuals with the talent, skill, experience, and a personal vision of how best to bring the many disparate theatrical elements together that every show requires.  It’s magic time when the actors are in synch with the director, and when that happens audiences are treated to a memorable evening in the theatre.  “The 39 Steps” is fortunate to have Ken Parks helming this splendid production.  The evening is chock-full of his clever and inspired directorial touches.  And the audience roars its approval with howls of laughter throughout giving the cast a much deserved, standing ovation at the curtain call.

In the technical department the creative team led by Parks, benefits from the Set Design of James W. Gruessing, Jr; Phil Murphy’s skillful lighting plot; the clever sound design of Chris Warren Murry; Wardrobe Mistress Chaneen McCurdy, and her two dressers: DeLane Marianowits and Shari White (one can only imagine the world-wind of activity that takes place backstage at every performance).  And finally, Stage Manager Chris Warren Murry who keeps everything in order, and makes sure that no one misses an entrance amid the flurry of backstage activity.  It’s an impressive effort.

Coyote StageWorks, has been voted Best Live Theatre in the Coachella Valley by Desert Magazine two years running.  “The 39 Steps” runs at the Annenberg Theatre through March 9th.  Don’t Miss It.  Call the box office at 760-325-4490 for tickets and information.