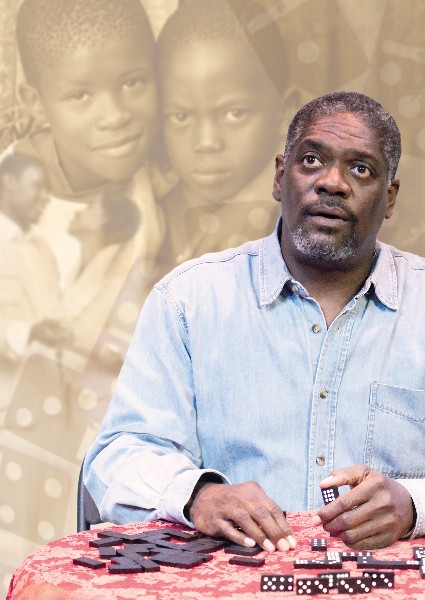 Rolling the bones in Broke-Ology at Lyric Stage.

The Lyric Stage Company of Boston continues its 2010-11 season with BROKE-OLOGY, a warm and wrenching play about a loving African-American family facing its troubles with humor, resiliency, and grace. Set in a beleaguered Kansas City neighborhood, two grown brothers try to balance the challenges of their own lives with their desire to care for their ailing father. Even as they remember simpler times, tension builds between the brothers as their conflicting interests churn into a surprising outcome.

Monty Cole (Malcolm) is making his Lyric Stage debut. Recent credits include Bud, Not Buddy; Light up the Sky;The Bluest Eye; Harold's Fall or King Will;  and he will soon appear in a site-specific production of Harold Pinter’s Betrayal.  He recently was a faculty member at The National High School Institute for Theatre (“Cherubs”) in Evanston, IL.  Monty is an ensemble member for the comedy troupe Chocolate Cake City at Emerson College. This May, he will graduate from Emerson with a B.A. in Theatre Studies.

David Curtis* (Ennis) is making his Lyric Stage debut. His stage credits include The Sing Song Show (Boston Arts Academy); ONE4DeBROVAS (New Federal Theatre); The Last Days of Judas Iscariot and A More Perfect Union (Company One); Mother G, Dark as a Thousand Midnights, Spunk, Ascension, and Mama, I Want to Sing (Our Place Theatre, Inc.); A Streetcar Named Desire, 12 Angry Jurors (Roxbury Repertory Theatre/Roxbury Community College/Emerson Stage). David’s film credits include 4 Cambridge Center, The Maiden Heist, Under the Hood, Edge of Darkness, The Last Harbor, The Proposal, and Possessions. David is also an experienced musician, having been a percussionist/drummer, producer, engineer, and composer. David dedicates this show to all 5 of his brothers

Johnny Lee Davenport* (William) is making his Lyric Stage debut. Johnny was recently nominated for an IRNE best supporting actor award for his role as Parcell Sytes in The Huntington’s Vengeance Is The Lord’s.  In Company One’s Neighbors, as Richard Patterson, he received critical acclaim.  This veteran of stage and screen is making Boston his new theatre home.

Patrice Jean-Baptiste (Sonia) is making her Lyric Stage debut.  Area credits include work with Zeitgeist Stage Company, Commonwealth Shakespeare Company, and Actors' Shakespeare Project.  She lives in Milton and has taught at Milton Academy for twelve years.  Her education and training are from Boston University and Trinity Rep Conservatory.