BIFF Presents A Place at the Table 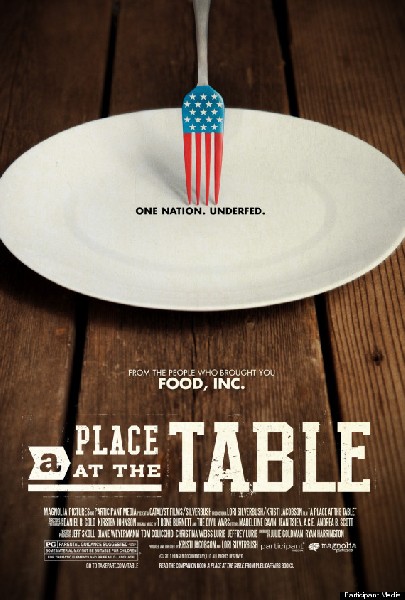 BIFF COLLABORATES WITH MONUMENT MOUNTAIN HIGH SCHOOL STUDENTS TO HOST FREE DINNER, SCREENING OF DOC FILMAND PANEL DISCUSSION WITH DISTINGUISHED GUESTS THIS THURSDAY, MARCH 13
(Great Barrington, MA) - THE BIFF is proud to partner with Monument Mountain Regional High School (MMRHS) to present a very special community screening of the award-winning documentary A PLACE AT THE TABLE,narrated by Academy Award winner Jeff Bridges and directed by Kristi Jacobson and Lori Silverbush.  The BIFF and MMRHS will present a FREE community dinner followed by the screening and panel discussion on Thursday, March 13 at Monument High School.  The dinner will begin at 5:30, with the film at 6:30.


Immediately following the screening, a panel discussion to discuss the film and the surprising face of hunger in Berkshire County will include Senator Ben Downing, Representative Smitty Pignatelli, Andrew Morehouse of the Food Bank of Western Massachusetts, Monument Mountain student food activist Zoe Borden and Peter Stanton of the Nutrition Center of the Berkshires.

Fifty million people in the U.S.—one in four children—don’t know where their next meal is coming from. Directors Kristi Jacobson and Lori Silverbush examine the issue of hunger in America through the lens of three people struggling with food insecurity: Barbie, a single Philadelphia mother who grew up in poverty and is trying to provide a better life for her two kids; Rosie, a Colorado fifth-grader who often has to depend on friends and neighbors to feed her and has trouble concentrating in school; and Tremonica, a Mississippi second-grader whose asthma and health issues are exacerbated by the largely empty calories her hardworking mother can afford.

Ultimately, A Place at the Table shows us how hunger poses serious economic, social and cultural implications for our nation, and that it could be solved once and for all, if the American public decides — as they have in the past — that making healthy food available and affordable is in the best interest of us all.

"The Sundance Film Festival is chock full of documentaries this year about the troubles besetting America... but A PLACE AT THE TABLE may rank AMONG THE MOST MOVING in that it tackles a seemingly straightforward, solvable problem: hunger in the United States." — LA Times.

The film and dinner are FREE and open to the public! Both vegetarian and meat chili will be served for dinner and will be served in the cafeteria.  The Farm to School Stand (store) will be open and selling healthy snacks.

Monetary donations to JO SPARTAN are happily accepted.  This fund was initiated five years ago through a donation from the Karebear Invitational Golf Tournament, and it is used to help MMRHS students who may find themselves in need of lunch money, fees for field trips, equipment, etc.    For more information on the Jo Spartan fund, contact Marianne Young at MMRHS.

A food drive will begin that evening and continue throughout the year.   Donations of nutritious foods are welcome, and the food will be delivered to South County food banks.

We hope you will join us and be PART OF THE SOLUTION!