The Arts and The Economy, Interconnected Gears 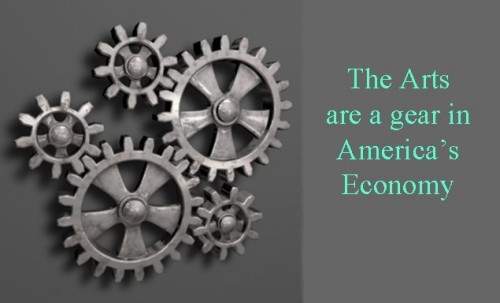 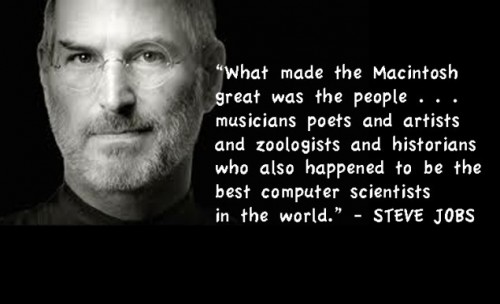 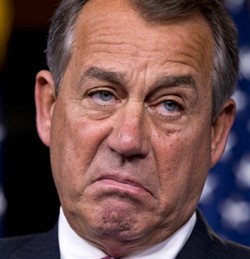 Another pol who is soft on Wall Street â€” tough on Sesame Street.

What a mess. Congress deadlocked. People disgusted. Growth stalled. And I think it is because we have let things get out of hand.

Show me an intransigent legislator and I will show you someone who does not participate in the arts. So you think John Boehner has ever been to the theatre? Eric Cantor to a dance performance? Paul Rand to a classical concert? Bet they all love those macho-stereotype and “reality” shows on television though. Great source of new ideas in bullying.

Those who block the forward progress of society are generally backward looking, and hostile to the arts and intellectual exercises. Damn shame too. It hurts the economy, and their unemployed constituents who don’t fathom the connection between the arts, economic progress and innovation. They demand the bills be paid and the arts be starved. That’s short term thinking because economic growth and the arts are essential to the future, and very tightly interconnected. Let me try to explain.

So where do great nations and economies find their economic strength? Once – back in the days of the industrial revolution – it was in tinkering and manufacturing. Turning out millions of widgets at low cost. But in a global economy those jobs are now in second and third world countries like India, China and Mexico where huge segments of the populations are not particularly well educated or skilled and willing to work for pennies an hour. The sad side effect of this is that here in the USA, and Britain, too, it has left lots of our own population out of work. And having a college education is not enough to guarantee a job. You need not only to be smart but also to be innovative. And far too many students are unable to think about how they can create their own jobs.

Ideas are the currency of the creative economy which, if you haven’t noticed, is under attack these days. Sometimes by corporations trying to maintain market superiority not by innovating, but by legislation. Creative people are treated like interchangeable commodities, their thinking shut off by companies that prize conformity more than real creativity.

The Real Source of Creativity is Exposure to New Ideas, New Connections

When someone goes to a live performance, more often than not they will be exposed to new ways of thinking, seeing and doing. And these seeming unrelated activities exercise new pathways in the brain that make it easier for us to think in new and creative ways. Not only about relationships between people, but in forging new paths to new and profitable products and services for the American economy. Someone who spends their time exercising the gears of their thinking is better positioned for economic challenges than someone who, well, doesn’t think much at all.

Bean counters for example, don’t have to think much, just apply the formulas. Most companies value them more than the creative types. Ever been to a business meeting when a new idea is introduced. Career suicide for far too many people. So they never speak up. Don’t question the boss who is better at playing office politics than coming up with anything original. And those penny ante investors. Millions of would be Romney’s not creating even a single widget among the lot of them. Even the United States with all its wealth can’t turn into a nation of Swiss bankers living off everyone else’s hard work. Someone has to make something real now and then to keep the gears of commerce from rusting.

“Creativity is the Most Crucial Factor for Future Success.” is what a 2010 IBM CEO study said even as that company continued to enforce its notorious conformity in thought, dress and speech in order to remain employed. Other companies, like Apple under Steve Jobs took huge creative risks which continues to pay out handsomely for that company long mocked as too expensive, too elitist. You can bet their employees take in lots of performances to keep their innovative thinking at its highest possible level. And Microsoft? Playing catch-up now, but they were never innovators, just copycats. Apple could fall in love with the idea of being the biggest instead of the best, too. Jobs is gone now and some of the company’s more recent thinking seems to be a return to the old way of thinking “scale” rather than “uniqueness.”

Steve Jobs knew it was new connections for old gears

More than anyone, Jobs was certain that progress was not just doing things differently, but in finding new connections to solve old problems, or to create something entirely new where nothing existed before. Genius. He saw markets before they even existed in anyone else’s mind.

“Creativity is just connecting things. When you ask creative people how they did something, they feel a little guilty because they didn’t really do it, they just saw something. It seemed obvious to them after a while. That’s because they were able to connect experiences they’ve had and synthesize new things. And the reason they were able to do that was that they’ve had more experiences or they have thought more about their experiences than other people. Unfortunately, that’s too rare a commodity. A lot of people in our industry haven’t had very diverse experiences. So they don’t have enough dots to connect, and they end up with very linear solutions without a broad perspective on the problem. The broader one’s understanding of the human experience, the better design we will have.” – Steve Jobs, Wired, February, 1995

If we are going to find solutions in a world that is becoming increasingly interconnected and complex, we cannot rely on traditional ways of leading and managing.

Historically, creativity and experimentation have always co-existed, with the arts and sciences working from the same basic raw materials, ideas and connections, to better society. This week professor Greg Moynihan will talk about this historic relationship at RPI’s EMPAC in a free talk. More information (Here).

As the global economy continues to change the economic landscape, one inescapable area in which the US has led the world for decades is in innovation, both technical and intellectual. Do not underestimate the huge benefits corporations have gleaned from simple creative brainpower which has led to this country’s domination in the digital and entertainment worlds. The motion pictures, television programs and output of the creative arts have set the bar very high for the rest of the world, and the amount of commerce based on it is enormous.

This has held true for the UK as well. Who hasn’t seen and remarked on Downton Abbey, the play and film War Horse, and the dozens of musicals from London’s West End that filled Broadway theatres in lean years when there were few decent American plays or musicals with commercial viability.

From the Berkshires to Broadway and then the World

Most people are unaware of the “Farm League” style of nurturing future talent for the theatre. The two Berkshires, our own in Massachusetts and the mirror one in the U.K. are adventurous in this regard.

Travelers are familiar with London’s West End, but are unlikely to see the hundreds of minor league local theatres that serve as the spawning ground for their financially successful blockbuster attractions. All the arts are dependent on fresh minds to create fresh material on a regular basis.

In the Berkshires, we have four theatre companies creating new work which often is seen not only here, but then moves on to New York City, and the best of these to other community and regional theatres across the country. Some writers, actors and directors that have their roots here are celebrated around the world. Some go on to film and television, some work in all the mediums.

As I write this, the Berkshire Festival of Women Writers is in full swing, celebrating our local creators of plays, books and poetry and their contributions to a better life for all. Some are well along the path to income and recognition, all are hard at work trying to make a better world for all of us. The arts are not only an economic catalyst, but civilizing, too.

Sadly, America’s technology lead is now endangered by about a third of the population – a loud shouting rabble which can not discuss things, only shout others down.

They are for cuts to education, seemingly anti-women, anti-gay, anti-science and anti-intellectual scolds who listen to the thinly disguised hate speech of ignorant religious fundamentalists, the Tea Party and the GOP. Almost to the last person, they dismiss the arts as a waste of time and money, or the work of satan, heathens and atheists. Forming original ideas may be a challenge to them, but making harsh judgements is not.

Poor, undereducated and often living in poverty, they vote against their own interests and thereby rot the underpinnings of America’s economic greatness. The one certain outcome of their fear-based rhetoric becoming policy is the very real possibility that their stranglehold on original thought could be so devastating as to hasten America’s descent into a second tier nation. The deficit is not only financial, it is intellectual as well.

Observe the demonization of the arts by Republican politicians and their calls to eliminate the National Endowments for the Arts (and Humanities). This is not merely political noise, it is downright dangerous. Undermine the arts and their civilizing influence on millions of people and a descent into chaos is not far behind. Kansas Governor Sam Brownback (who is a member of Agnus Dei) eliminated the Kansas Arts Council. Oklahoma is doing the same.

I say these are boneheaded moves. Look at the reality in Oklahoma: the annual $4 million they allocate to the arts is less than one-tenth of 1 percent of the state budget, with 80 percent of funding going directly to communities across the state. Those funds support Oklahoma’s $314.8 million nonprofit arts and cultural industry and more than 10,000 jobs. The industry generates $29 million in state and local tax revenue. The arts are an economic engine that generates $6 in revenue for each dollar invested. Far better than Las Vegas odds, so where’s the logic in shutting an arts council down? It’s a Bible Belt state. There some people’s faith trumps actual logic. I figure some evangelical preacher probably saw the play Inherit the Wind which makes mincemeat out of the fundamentalists claim that teaching evolution is wrong, and went to war over even allowing such ideas on stage.

There has had great success in killing support for the arts in the red states, and on a national level it is being done by a hundred small cuts by those that would see us silenced.

Often it is in the theatre where we hear and learn about the great topical debates, and we must not allow them to be dumbed down or starved to death. It is not good policy to eliminate those things that make us more human. No better example can be seen than in the polarization of our Congress, with one side absolutely refusing to compromise and getting away with it. The Constitution was written to facilitate the process of legislation,not freeze it. The Bill of Rights guaranteed free speech and free press to keep citizens in control of their country. Both Congress and the media are now controlled by Corporations, not people, and their stated duty is to provide profits to their shareholders, not look out for the best interests of the people.

We live in troubling times.

Part of a Series on the Economy and the Arts originally appeared in Berkshire on Stage. It is resposted with permission. Larry Murray was a founding contributor to Berkshire Fine Arts.