The Architecture of Becoming 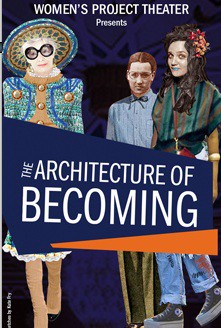 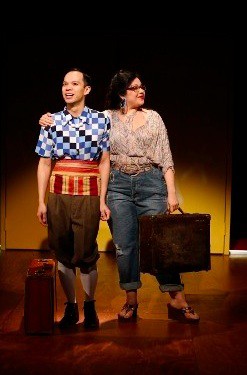 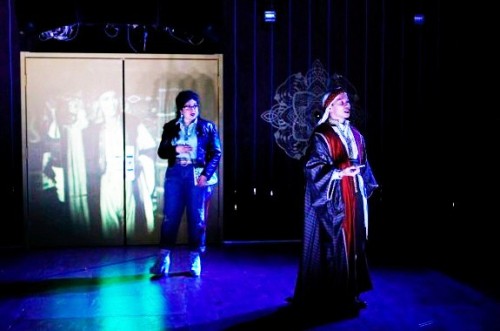 The Women's Project Theater at New York City's City Center is presenting the world premier of The Architecture Of Becoming.

The play opens in the here and now with a writer sent to do a story on City Center.

Siempre Norteada has moved from her home and family in Texas and is lost both in the city and in her assignment. She pleads with the spirits of the theater to help her. Grande Dame, the ghost of City Center, the ghost of New York City itself, appears to help her. She will show Siempre three stories that have taken place in the city with the theater as a central character. Three stories of those who came here to discover themselves and paid the high cost New York extracts. The only caveat is that Siempre be prepared to pay the high cost herself.

An old postcard of City Center, in one of its incarnations as a Shriner's Temple, is the thread that weaves these four stories together.

The first story is set in New York City in the early 1920s. City Center is a Shriner's Temple then. A young girl meets a man on the street by chance and in her attraction, follows him to the Shriner's Temple where she cannot gain access. It is men only. When she finally does gain entrance, months later, she discovers that the goings on are less mystic and more frat house. She also finds that her boyfriend is only a waiter there, not a member. They sleep together for the first time that night, but in the aftermath, neither one wants to continue the relationship. She returns to Ohio, pregnant, and disillusioned.

The second story is in the New York of WW11. A young Japanese woman, Tomomi Nakamura, is saved from a California internment camp by marrying a Japanese man from New York.

In an amusing scene, we see the shock she has at the small size of her new apartment, which so many of us New Yorkers know all too well. "A kitchen inside of a living room, inside of a bedroom."

Tomomi finds the old postcard, on the back of which reads: "What you seek is beyond this door; When the smoke clears you will be heard."

She goes to the theater and gets a job cleaning City Center, which is now a theater for the people. She is told to be quiet as our countries are at war. She is not yet to be heard. She tells us, through her radio voice, that she yearns to be an actress, but only to tell her story. A lesbian falls in love with her and tries to seduce her at a picnic. This, and an offer to run away and act with the star Rudolph Valentino, although he had died in 1926, left me wondering what the point of this scene was. She apparently finds her voice and leaves both her husband and the lesbian, but the connection to both the city and City Center could have been clearer.

The third story is set in the summer of 1977 with a graffiti artist/poet spray painting the names of operatic composers as the ghost of an opera singer, trapped in City Center, sings them. Another hard core New York "poet" comes to be with him there. Somebody gave her the postcard today in her tip can. "When the smoke clears, you will be heard."

She, too, needs to be heard and just receiving this postcard makes her feel hopeful. The daughter of the manager of City Center enters and tells them to get lost. The three characters, after much animosity, bond for a moment and together set the ghost free. Of this time in New York, I am most familiar. I remember the dirt, the crime, graffiti everywhere, the hopelessness. City Center, like much of New York, was showing its age. but this scene as well, left me wondering how the overall arc of the play was being served.

Magical realism is difficult to accomplish, and its evocation in this production had its moments. But it missed the mark enough to leave me confused as to time and place in several scenes. The acting, set design, costumes, and sound were all superb. The actors each had to traverse widely divergent characters and eras and did so with well honed technique and energy. The direction and set design were ingenious as this play demanded much in its expansive time travel and scene requirements. Evoking NY on a small stage is no simple matter.

The play explores the themes of home. Where and what is it? And how New York City extracts so much from its residents.

As a native New Yorker, I appreciated the hard truths that are apparent only after living here. New York will give you more in experience, inspiration, and art than anywhere else.

As the Grande Dame says, "I am this city. I am the dreams that gather here. I am the call that draws the dreamers."

But the city extracts a huge price as well. The city will change you. If you are native to another place, you will outgrow your family and your friends. You will not have money or comforts and the city will give you harsh realities to deal with. Your life will not be easy, but it will be rich if you take up the city’s offer.

Many come here and understandably leave.

The play ends with Siempre Norteada as she started, watching old movies in the theater at night. But she has changed irrevocably. She has found her artistic voice and is staying.

So too, this play finds its voice in evoking the time periods and moods of the city.

The clever, yet simple stage design allowed for the audience to believe this was the door to City Center, the inside of the theater, a subway station, several apartments and the streets. The costumes were inventive and in the case of the Grande Dame, wildly entertaining. That is how New York City would dress! The lighting gave atmosphere when needed and a sense of mystery for the ghost who was to lead us on our adventure.