Over, Under, Next At Hirshhorn Museum 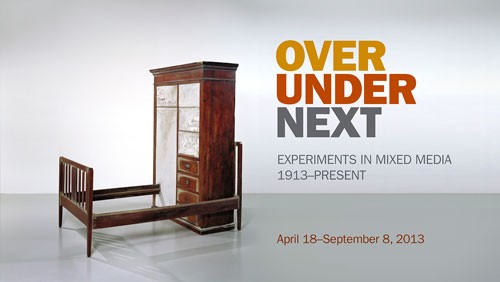 The exhibition opens in April.

“Over, Under, Next: Experiments in Mixed Media, 1913–Present,” an exhibition of approximately 100 works drawn largely from the Hirshhorn Museum and Sculpture Garden’s collection, runs April 18 through Sept. 8.

The first in a series of permanent collection-related exhibitions leading up to the museum’s 40th anniversary in 2014, “Over, Under, Next” surveys an era in which the definition and scope of art were continually expanded through the avant-garde’s embrace of “non-art” materials. Artists from virtually every major movement of the past century—from Cubism, Dada and Surrealism through Abstract Expressionism, Pop and Post-Modernism—participated in the revolution.

The exhibition tracks the development of the elements of mixed media, from the wood grain-printed paper of Georges Braque to the beaded Easter baskets of Nick Cave. The roster of unorthodox and incongruous materials includes butterfly wings, glass shards, crumpled automotive metal, jigsaw puzzle pieces, clothing, furniture and colored sand.

Artworks and decorative items incorporating glued paper or found objects predate modernism, but the birth of collage as a medium in which remnants of the everyday are often jarringly juxtaposed with products of the artist’s hand is credited to Braque. In 1912, having worked for several years alongside Pablo Picasso in the development of Analytic Cubism, Braque began to incorporate swatches of printed paper and oil cloth into his pictures. His “Aria de Bach” (1913), on loan from the National Gallery of Art, was made the year after he created the first “papier collé” (literally, “pasted paper”).

An innovator of photomontage who helped establish collage as an art form primarily inspired by mass media, Hannah Höch instead drew inspiration from her employment as a designer of embroidery and lace patterns for “Tailor’s Flower” (1920). The work incorporates fragments of sewing patterns into a lyrical abstraction that magnifies the language of collage, allowing it to encompass a range of sources, including domestic handicraft.

The richly referential nature of collage and its three-dimensional analogue, assemblage, lent itself naturally to the dreamlike compositions of Surrealism. Comprising colored sand, seashells and seaweed, André Masson’s “Caryatid” (1939) is envisioned as a creature of the sea, more mermaid than monument. In “Nut Girls” (1941), Man Ray playfully tweaked the female form, using two walnut halves—one actual, the other a photograph—as the head and torso, respectively, of two figures.

In his box constructions, Joseph Cornell staged private fantasies of glamour, time travel and bookish reverie, combining maps, art reproductions and other printed ephemera with precise arrangements of objects treasured by the artist. Evocative of theatrical tableaux or cabinets of curiosities, these works suggest undisclosed narratives.

Although frequently thought of in terms of painting, Abstract Expressionism also produced sculpture of great distinction. With its sense of spontaneous creation, John Chamberlain’s “Untitled” (1961), made of twisted metal from junked cars, has the dynamism and directness of a painting by Willem de Kooning or Franz Kline, who is represented in “Over, Under, Next” by the painted collage “Untitled” (1948).

Bridging the divide between painting and sculpture, and between Abstract Expressionism and Pop, are the “Combines” of Robert Rauschenberg. Incorporating two- and three-dimensional elements—torn posters, newspaper clippings, a metal cap, the rear of a pair of pants—many of which the artist collected on the streets of his Lower Manhattan neighborhood, “Dam” (1966) invites viewers to make unexpected connections between word and image, art and everyday life.

The materials of assemblage can be boldly literal, like the heavy iron cylinder that rests atop the red plywood box of Donald Judd’s Minimalist “Untitled” (1963), or they can be obliquely suggestive, as in Eva Hesse’s Postminimalist “Vertiginous Detour” (1966), which dangles a cord-bedecked papier-mâché sphere from the ceiling in a fishnet bag.

Stan Brakhage compounded the literal use of materials with the fragmented passing of time when he employed a motion-picture projector to animate collaged elements in “Mothlight” (1963), a milestone in the history of experimental film. Many of his short films are painstakingly composed by hand, frame by frame, rather than photographed. For “Mothlight” he sandwiched a long stream of insect parts, plant fragments and other detritus between two filmstrips before running it through an optical printer, creating a flickering abstraction directly from the shadows of natural components.

In the media age, previously recorded images and sound became fodder for manipulation, and montage took its place beside collage and assemblage as a technique for recombining the new raw materials of daily life.

Bruce Conner’s groundbreaking short “Report” (1967) weaves together film and audio documentation of the John F. Kennedy assassination with other found footage. The culmination of three years of editing, it is a potent examination of how mass media breeds meaning.

During the civil rights era, African American artists such as Lois Mailou Jones and Romare Bearden used the clamorous energy of collage to convey the political tenor of fractious times. Bearden, in particular, extended the range of his collage works to depict large swaths of history, both ancient and modern.

Thirty years later, Colombian artist Doris Salcedo repurposed used furniture to respond indirectly to the wave of abduction, torture and mass murder that gripped her country. For “Untitled” (1995), she married a second-hand armoir to a bed frame, then filled the cavities with cement, in mute memorial to the “desaparecidos” (“disappeared”). “Used materials are profoundly human,” Salcedo has said. “They all bespeak the presence of a human being.”

Installation artists’ conception of art as a site for interaction with the viewer led to the development of immersive assemblages scaled to the human body. The closed-off vitrines of Damien Hirst’s “The Asthmatic Escaped II” (1992) suggest the confines from which a prisoner has mysteriously vanished; according to the artist, the work’s title refers to British painter Francis Bacon, an asthmatic who died the year this work was made.

Although it too contains a vitrine, in this case filled with live snails feeding on cabbages, “palimpsest” (1989), by Ann Hamilton, in collaboration with Kathryn Clark, welcomes visitors inside a specially appointed room to view it. The space is lined with pieces of newsprint bearing hand-copied excerpts from private and public memoirs. This work, too, has a biographical reference, having been inspired by the story of an elderly man who covered the walls of his home with notecards, bolstering his fading memory with reminders to himself.

By expanding the range of materials available for their work, artists using techniques of collage, assemblage and montage have enriched the language of art and extended its potential to comment upon life.

“Over, Under, Next” is organized by associate curator Evelyn Hankins.

Related Programs
The Hirshhorn offers a range of interactive educational experiences designed to engage people of all interest levels in contemporary art. On Friday, May 17, at 7 p.m., in the Ring Auditorium, Ann Hamilton will present the latest in the Hirshhorn’s ongoing series of Meet the Artist lectures. Artists, scholars and other experts address “Over, Under, Next” in depth in several Friday Gallery Talks; visit hirshhorn.si.edu for a complete schedule. The museum’s library of podcasts, archived on its website, makes gallery walk-throughs and interviews with artists accessible internationally.

About the Hirshhorn
The Hirshhorn Museum and Sculpture Garden, the Smithsonian’s museum of international modern and contemporary art, has nearly 12,000 paintings, sculptures, photographs, mixed-media installations, works on paper and new media works in its collection. The Hirshhorn presents diverse exhibitions and offers an array of public programs that explore modern and contemporary art. Located at Independence Avenue and Seventh Street S.W., the museum is open daily from 10 a.m. to 5:30 p.m. (closed Dec. 25). Admission to the galleries and special programs is free.