Return to ArtsEmeson by Popular demand 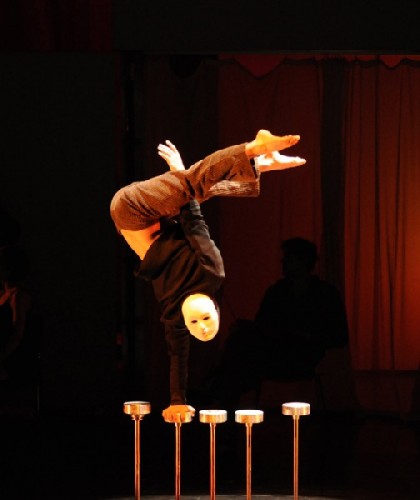 PSY flipping out at ArtsEmerson. 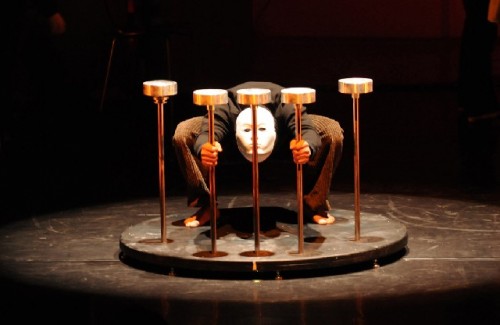 Back for a summer run by popular demand. 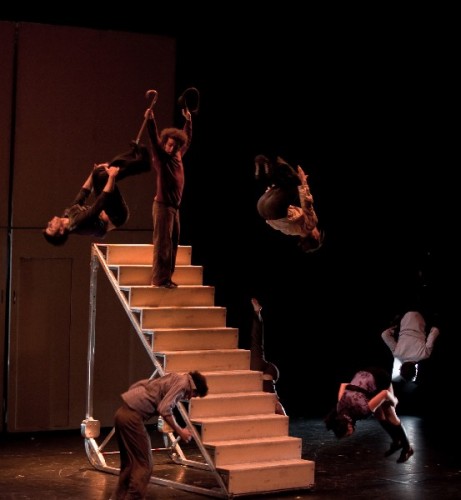 Due to the overwhelming demand generated by their short January visit to Boston, ArtsEmerson: The World on Stage is pleased to announce the return of the French Canadian contemporary circus company Les 7 doigts de la main (The 7 Fingers) performing PSY (pronounced P.S.Y.) for a two week summer run.

PSY is an astonishingly physical and energetic work that delves into the murky world of the subconscious, depicting a rich psychological dreamscape through the often surreal, incomparable language of the circus arts. Directed by Shana Carroll; Assistant Director Isabelle Chassé, with an eclectic musical score featuring Kid Koala, Burt Bacharach, Yann Tiersen, The Avalanches, Caravan Palace and more.

PSY features 11 staggeringly talented young and achingly hip performers from Quebec. Each has their own peculiar modern malady (insomnia, hypochondria or compulsive behavior) along with an amazing set of heart-stopping, death-defying circus skills to match – including Chinese poles, aerial ropes, knife juggling, trapeze and breathtaking acrobatics. This innovative show is packed with dazzling daredevilry, urban charm, infectious energy and heaps of personality.

Sitting in the quiet of a psychiatrist's office, the voices in a man's head instruct him to climb on a trapeze and hang by his toes. An obsessive - compulsive patient crosses a busy intersection, his attempts to avoid contact leading him to perform acrobatics across a sea of pedestrians. A woman, confronting agoraphobia, is led to swing through the air. PSY brings some of the darker sides of human nature together with the provocative and transcendent language of the circus arts.

Traveling through a shifting landscape of distorted visions, fading dreams and fractured memories, there’s insomnia, addiction, amnesia, paranoia, and hypochondria. There’s also juggling, Chinese pole, German wheel, aerial rope, and teeterboard. By juxtaposing these darker issues with the invigorating and life-affirming language of circus arts, PSY illuminates the humor, beauty, and commonality of these various neuroses, all the while celebrating the power of the individual to surmount their ailments and self-imposed restrictions, finding moments of strength, courage and joy while flying through the air.

Don't miss what Boston audiences loved so much in January - a breathtaking and utterly irresistible show from one of the world’s coolest and most inventive contemporary circus companies.

The 7 Fingers was founded in Montreal in 2002 by seven seasoned circus performers. Friends who had worked together in such prestigious companies as the Cirque du Soleil, the Cirque Eloize, Wintergarten Variety, Teatro Zinzanni, the Pickle Family Circus and Cirque Knie, or trained together at Montreal’s National Circus School, these artists decided it was time to offer something new to the circus arts scene, creating a circus of an entirely different flavor.

Their goal was to bring circus to a human scale, employing a strikingly human and unprecedented multi-disciplinary approach to circus. Witness the grace and youthful virtuosity of this decidedly hip group of performers.

“…a transfixing circus spectacle that boggles both mind and eye while also relocating your heart to your throat once in a while. It’s one of those shows that has to be seen to be disbelieved.” The Boston Globe

“Ever wondered what a human fireworks display looks like? Les 7 Doigts de la Main’s PSY is about as close as you’re gonna get. You’ll “ooh” and “aah,” be totally bowled over and generally never want it to end.” – Time Out Boston

“One step closer to reinventing the wheel – a circus trailblazer.” – Montreal Gazette

For more information about The 7 Fingers, visit http://7doigts.com