Visions Through a Personal Prism 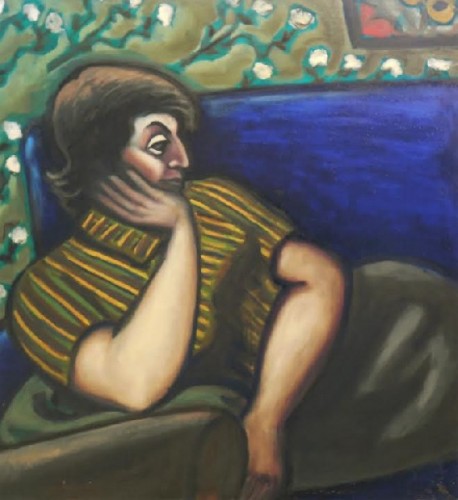 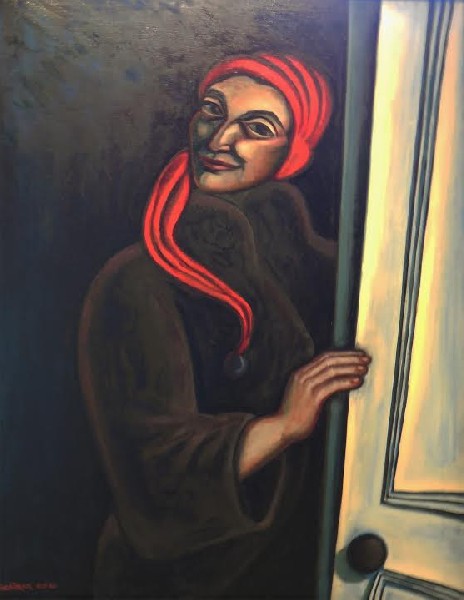 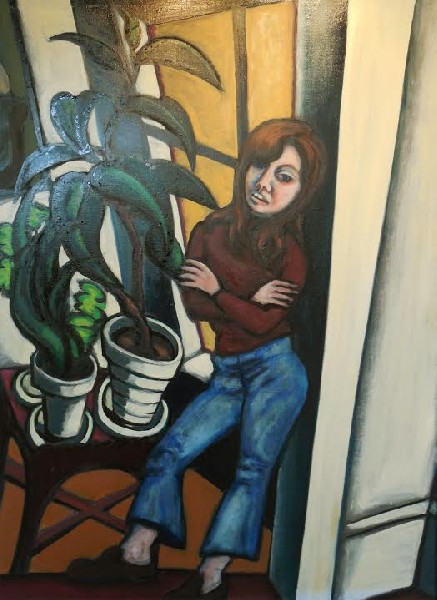 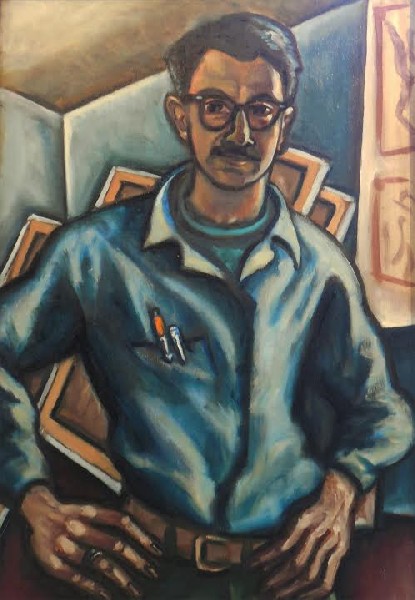 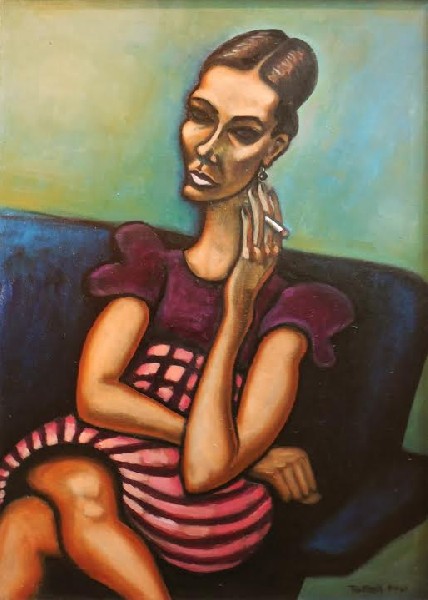 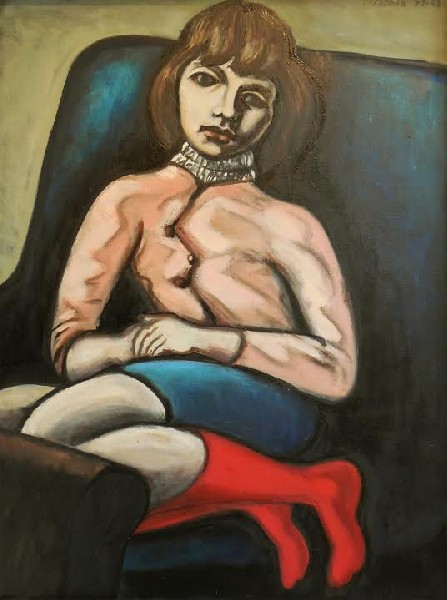 Maxima With Red Sox By Arnold Trachtman (1967) Acrylic on Canvas 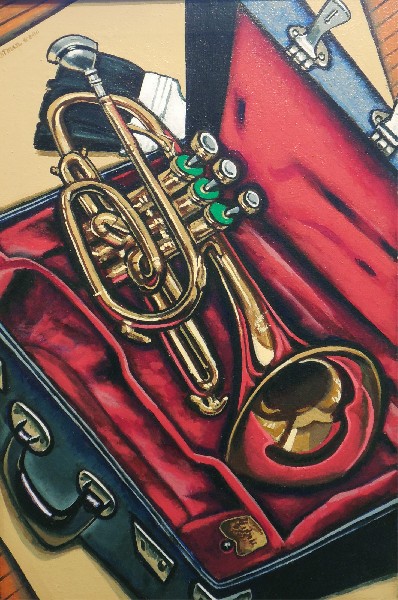 Cornet in Case By Arnold Trachtman (1974) Acrylic on Canvas 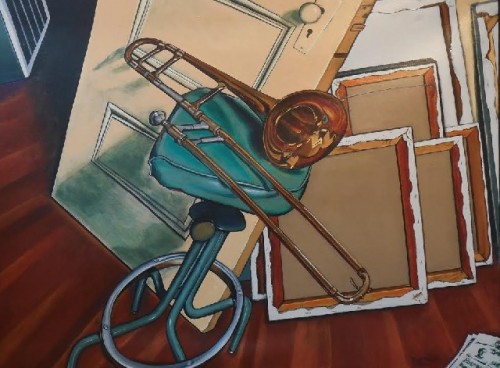 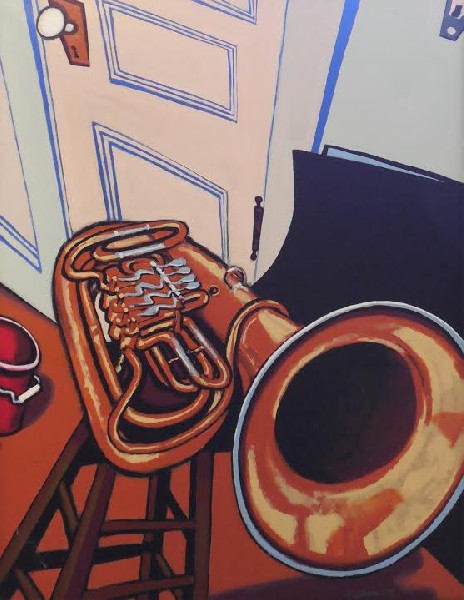 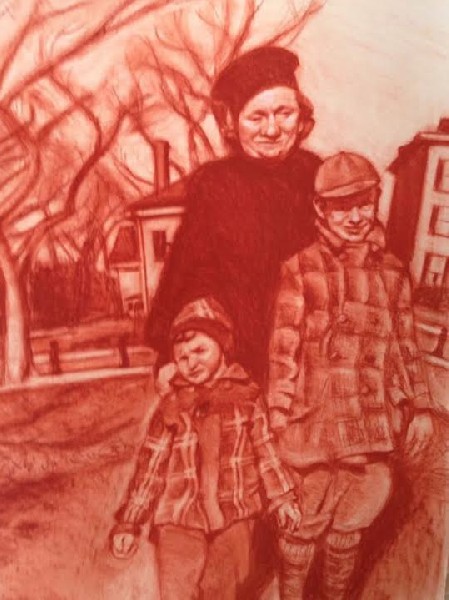 My Mother, My Brother and Me By Arnold Trachtman (2001) Acrylic on Canvas 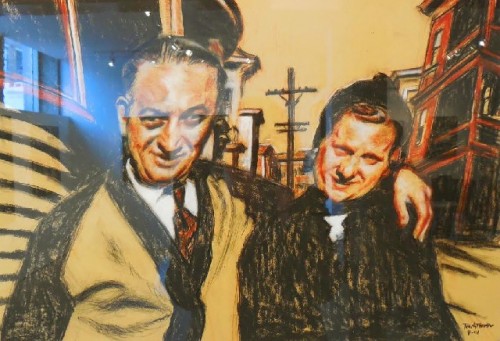 My father and Mother By Arnold Trachtman (2001) Acrylic on Canvas 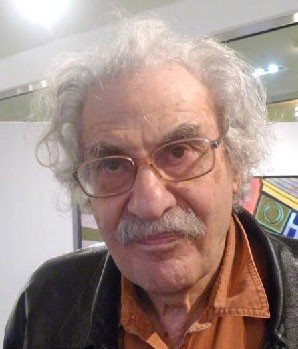 Arnold Trachtman is an artistic original. Not adhering to any outside direction, fad or current stylistic wave, for over 80 years he has drawn and painted what he was compelled to create.

An artist of unique qualities, Trachtman's visual statements are full of strong image and content. Now in his mid80s, he has brought his background as a New Englander of an immigrant  Jewish-American working class background from the downwardly spiraling small blue collar Lynn, Massachusetts decidedly to his work. His artwork documents his and our shared American history, experience and urban environment.

With his politics unalterably leftist, his views are often cynical, yet his anger is measured and thoughtful. There is a wistful smile and twinkle in his eye to moderate his passion. Over the course of his career, he has been duty-bound to create and document history through a very personal lens.

His vision and style are a holdover and a quite individual translation of the Social Realists, German Expressionists and Mexican muralists genres of the '20s, '30s and '40s. However the paintings now on view at Galatea Fine Art are of a more mellow quality than some of his more strident political works. In this exhibit, Arnold is dealing with personal memories and lyrical musical instrument portraits.

He was a rather nonconforming art teacher for many years both at the high school and college levels. A learned art historian, his works incorporate either literally or subliminally art historical influences and references.

Like Thomas Hart Benton and other Regionalists like Grant Wood and John Steuart Curry, Trachtman’s fluid, sculpted figures show everyday people in scenes. And though not Midwestern but Northeastern in their urban grittiness, his paintings express the universality of everyman or woman. There is also a bit of Synchromism in his art as well.

Synchromism was an art movement led by American artists Standon MacDonald-Wright (1890-1973) and Morgan Russell (1886-1953)  based on an approach to painting that analogized color to music. Trachtman's paintings have a very musical quality that expresses rhythm and cadence along with harmonies and sometimes cacophony.

These were among the first abstract paintings in American art, but later included, as Arnie does, representational images. The Synchromists made use of the broken planes of the Cubists, a geometry that also can be seen in Trachtman's works.

His work has an Expressionist composition as well. The grand gesture or expression is boldly stated. At times, some of his painting technique avoids the use of subtle shadings and colors.

Areas of his pictures often are composed of large shapes of bright, less naturalistic colors with dark lines. At times there is a cartoon-like quality to them. Objects and structures might sag or lean, showing the ground tilted up steeply, like the world viewed through a prism.

Interestingly, the most Expressionistic earliest paintings in the show are portraits of his family members as well as himself that are at once somewhat abstract but distinctively representational. The two strongest seem to be of his then young and much beloved daughter Maxima. Here empathy, youthful presence, love and parental feelings are intertwined with image.

The latest two are the portraits of his parents and his mother, brother and himself. Presumably, these are taken from snapshots, but they are translated into color, emotion, affection and perhaps a bit of poignant remembrances of the best of familial times past from long ago.

Among my favorites of his work are his “portraits” of musical instruments. Over the years, he painted many wonderful instrument images. Here the coronet, trombone and tuba all express vital character and even personality beyond the more subtle early portraits and the more photogenic later depictions.

Years ago, I urged Arnie to do more of these musical still life/portraits. I felt that they would be greatly popular and would surely sell. Selling of his art was never a particularly strong aspect of his career.

I even suggested to Arnie that he create a series of all of the instruments of the symphony and have a show at Boston Symphony Hall. Maybe, even make prints of each instrument. Surely, well-paid musicians and patrons would appreciate them. What a great marketing strategy I thought. But Arnie just shrugged and twitched his bushy Bolshevik mustache, adjusted his glasses and went on painting what Arnie wanted to paint.