God of Carnage at Chicago's Goodman 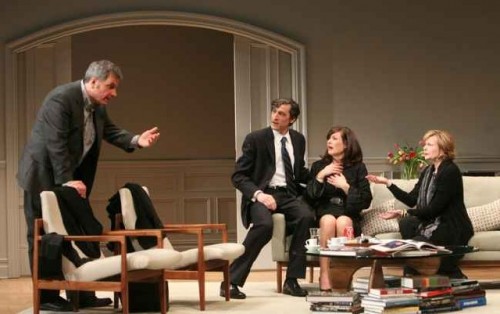 The calm before the storm, onstage at the Goodman. 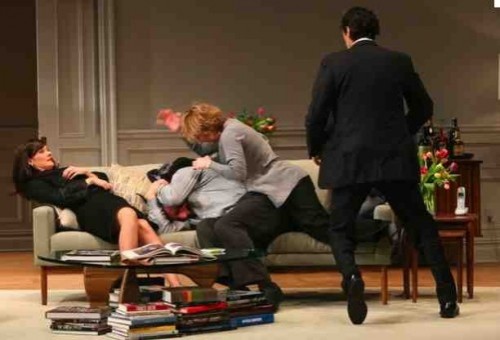 Things only get worse!

Even more important than most theatrical presentations, Yasmina Reza’s play depends on timing.  The Goodman production’s is exquisite.  In the videos, we watched rehearsals under director Rick Snyder’s clever guidance in which the four actors danced, boxed and fenced with each other.   Here the instincts that underlie our continuous efforts to ‘behave’ are allowed free reign. The movements, modified and contained, create perfect entrances of each line from a quartet of primus inter pares actors on stage.

On the Goodman website, Snyder talks about the play, and about how our basic animal instincts conflict with the need for cooperation in society.

Lines in the play when read silently by the eye leave you with a feeling that we are on a path to disaster.  We may be, but the Goodman actors lead us there with laugh after uncomfortable laugh.  We receive the message, tipped by the title, while we anxiously smile.

God of Carnage begins when two couples meet to negotiate a conflict between their two pre-pubescent sons. One of them has stabbed the other with a stick. The most politically attuned parent uses the word ‘armed,’ which is immediately taken off the table by the lawyer parent and changed to ‘furnish. Boys will be boys, but must adults be ‘boys’ too? In God of Carnage this is the net result.

Parents must come eventually to understand that what their children learn comes from the example of parents’ behavior, not any delivered instructions. In this play, we also see that we have very little control over our children’s lives.

To take each turn and twist of the play and reveal the arc before you have the pleasure of watching would be a mistake.  Surprises are such a pleasure here.  Not that you don’t murmur ‘aha’ as you laugh, because the themes of tulips, art books, Darfur and the transgressions of the pharmaceutical industry are woven so skillfully by the playwright and performed to perfection by the actors.

Although they perform seamlessly together, each of the actors deserves a call out: the politically impassioned Mary Beth Fisher, who called the meeting to order, and her husband, Keith Kupferer, who make us believe that abandoning a hamster is a crime worse than collaborating with Vichy.  David Pasquesi, the pharmaceutical company’s attorney who can not resist the ring of his cell phone until… and his glamorous, but delicately stomached wife. Beth Lacke, who turns on him in fury at the end.

The show has been extended through April 17, but demand is understandably high for this wonderful production.