For Goodness Sake by Musicals Tonight!

The First Musical by George and Ira Gershwin 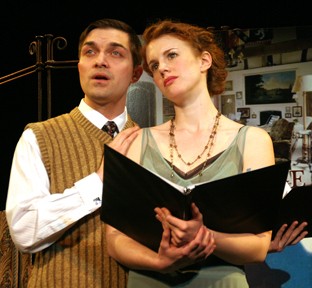 Nathan L Freeman and Natalie Beck in the Gershwin musical. 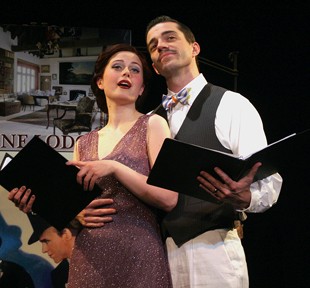 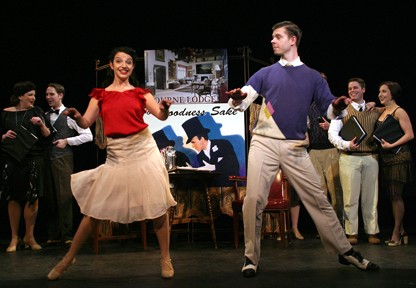 Musicals Tonight! is presenting For Goodness Sake at New York’s The Lion Theatre. A light, frothy musical it was one of the first collaborations between George and Ira Gershwin. It has not been seen in New York since its debut in 1922, although it had a successful run in England the following year. The now dated musical launched international stardom for its stars, Fred and Adele Astaire.

This is a staged reading, meaning that you will feel as though glimpsing the rehearsal process. I have seen many staged readings over the years and like this form of theatre. The actors were able to pull this off without making the audience feel distracted by holding scripts.

The plot of For Goodness Sake is simple, light, and fairly vacuous if it is approached with the sensibilities of a 21st century theatergoer. There are three main couples, all fabulously wealthy and who, along with a cast of other house guests, are embroiled in the tiffs of the main couple.

Perry and Vivi are upset with each other over their mutual extra relationship flirting. Perry's best friend, Geoff, comes up with an idea to punish Vivi with the caveat that Perry grant permission for Geoff to marry Perry's ward, Marjory whom he just met. Hmmm. There is another couple still in their teens, but determined to marry as well. Not a good idea, kids, not a good idea.

I was prepared to allow myself blithely to be taken into another, more carefree time. And listen to songs from the Great American Songbook. Instead, I found myself watching a rather dated story that did not translate as well as one hoped. It was a bit of the "Let them eat cake" scenario. We were subjected to the problems of those who don't have any. The biggest issue facing anyone seemed to be flirting, and even when the lead pretends to die, in order to illicit heartbreak from his betrothed, no one seems to be terribly upset.

The play never rose to the level of a comedy of manners or even the rapid fire dialogue of the screwball movies of the 1930s. But it was quite interesting to see perhaps the beginnings of these later, and more perfected, art forms.

That said, there were highlights. The cast did their best to bring energy and a sense of time to their roles. The lovely rounded tones of actors of that era were attempted, mostly successfully, which helped to transport the audience back to another time. The director had his hands full with a large cast on a small stage. He did an admiral job choreographing pieces for his actors that would fit in such a constricting space. I have had to choreograph dances on small stages, and it is no easy feat. There was a lot of talent on the stage, though at times not as cohesive as it could have been.

The leads, in particular Sean Bell as Teddy, all encompassed their roles well and brought a level of truth to the production.

Although it is hard to go wrong with a (partially) Gershwin score, the songs were not as memorable as most of their oeuvre and might explain why this musical was not revived for 92 years. With the exception being the standard, "I'll Build A Stairway To Paradise," which most of us know and I loved the cute, "The Whichness Of Whatness."

It is difficult to pull off a production of an old musical whose plotline is so transparently silly. And this from a woman who still cries over Swan Lake. But the characters here were mostly self-absorbed, spoiled, and foolish, making it hard to empathize with their plight, such as it was.

However, for a little over $26.00, it is worth seeing this revival whose run is over on March 30th, if for no other reason than to see how the other half lives, at least in the 1920s. Even though this particular play is more dated than relevant, I look forward to seeing the next productions from Musicals Tonight!. This part of our heritage needs to be aired and it is informative to see how the American musical has evolved through the years. Anyone studying musical theatre should see this production.