Ethan Lipton's No Place to Go 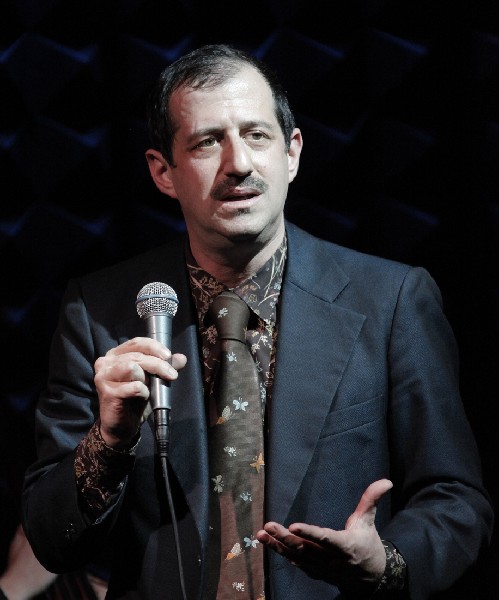 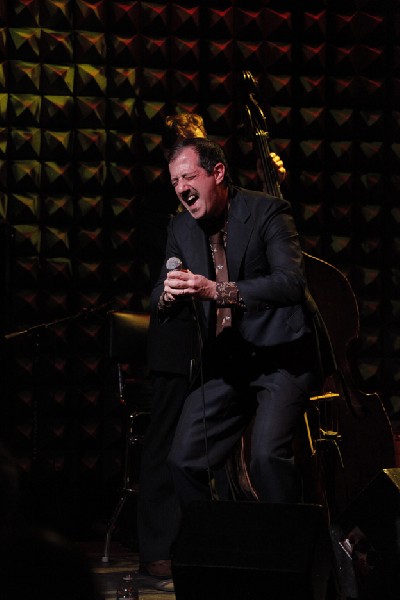 Packing them in at Joe’s Pub. 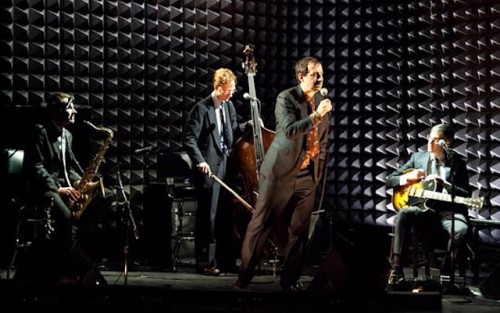 Lipton with his stellar band.

One of the more popular performance spaces in Manhattan is Joe’s Pub at The Public Theater. Here the cabaret and theatre goers are offered the very latest hot and happening talent along with food and drink at reasonable cost. While the sightlines, wherever you sit, as well as the room’s acoustics are stellar, the seating arrangements in certain sections of the room – the small, 4-top tables with high stools where I sat at for one – tend to be cramped. But let’s face it, if the talent is engaging, your tablemates exciting, if not desirous, the drinks strong – you may want three – and you do not have a elder hump on your back that keeps you from relaxing, all physical inconveniences tend to be put on the back burner.

Currently drawing crowds at Joe’s, due to good reviews, word of mouth, and what appears to be a cult following is Ethan Lipton’s and his 3 piece orchestra’s (saxophone, guitar, and bass) musical journey No Place To Go, dedicated as the program informs us to the 100%. The night I was there a cadre of gushing girls, no doubt out partying, laughed at every word that left the 41 year old, singer, song writer, actor, emerging playwright, and self-confessed office temp’s lips, all charmingly delivered by Lipton in the style of Garrison Keillor’s Prairie Home Companion coupled with Tom Wait-like yelp and growl cadences.

Commissioned by the Public Theater, thanks to a grant from the National Endowment for the Arts, No Place To Go, written by Ethan Lipton, directed by Leigh Silverman (Chinglish), with music composed by Lipton and his 3 orchestra mates, tells the story of Lipton’s plight, that of having to either find a new job or move to Mars – talk about galactic outsourcing – where his company has decided to move their operations to save money on rent. To add insult to injury, as well as topical flavor, Lipton, being a lowly, two day a week temp, he has yet to be asked to join the company team on Mars. Thoughts of having to move in with his “aging middle-aged parents — a not uncommon phenomena into today’s economic climate, begin to occupy his mind.

Lipton’s lyrics which bring to mind the plaintive lyrics of Leonard Cohen, as well as Pete Seeger, in large part, is a steamy love letter to his departing company, one that has happily supported his artistic endeavors for the last ten years. When he sings the lines “l know you’re sorry you walked away. You didn’t mean to be unkind you just couldn’t stay but if you want me I’ll go with you. You can have me if you want me I’m all yours if you will pay,” you get the feeling that he is talking to a lover who is leaving him. “You never asked me what you should do,” he sings. “You’ve got your thing, I’ve got mine too. But if you want me to go with you I can change my life in a day.”

In song after song, the lonely Lipton laments the closing of his company, the loss of his job, and the leaving of his friends. His first reaction, sung with a tinge of sadness, is his three tier plan on how he intends to cope. “First I am going to cry. Then I am going to weep. Then I am going to lie down on my bed a bawl until I fall asleep.” In other songs he sings, “I always knew I would be saying goodbye to you. I was afraid I would be walking away from you but I always knew that it was exactly what I would do.  The shop is closed. No place to go. The flesh is exposed. No place to go.” With optimism, tinged with regret, Lipton’s sings. “It’s a long road but I can crawl it. It’s a heavy load but I can haul it.”

Songs of job love and loss aside, Lipton adds a bit of past governmental history to open and close his show. In the second song of the evening – unbeknownst to us Lipton is getting ready for the kill – he sings praises to the WPA who created jobs for “the honest poor” along with roads, schools, bridges, and culture, all still in use today. He ends the show, somewhat unexpectedly, but fully appreciated by an audience hip to downsizing, unemployment, foreclosures, and the shenanigans of the US government and financial institutions, by singing of ‘The Troubled Assets Relief Program’ cooked up by the United States. “First they dipped us in frosting and sprinkles. Then they fed us to the banks… they built us a house full of lobbies and doled out the rooms to the banks…and now they want us to thank them.”