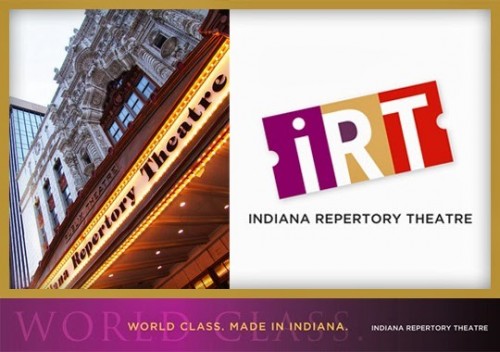 The Indiana Repertory Theatre has announced its season for 2014/2015. The mix of shows include a Shakespearean comedy to celebrate the Bard's 450th birthday, an award-winning Broadway play, and a few hidden gems from the regional theatre circuit.  To buy tickets or find out more information visit their site here. The season includes:

Two Gentlemen of Verona – September 16 - October 19 The grass is always greener, especially in Milan. Best friends Valentine and Proteus are in love with the same woman: will it destroy their friendship or teach them a lesson? Join us for an adventure in laughter and frivolity as we meet a circus of outlaws, a cross-dressing heroine, a dog-loving clown and two friends who discover that love isn’t an easy game to play in Shakespeare's comedy.

Red – October 14 - November 9 It’s 1958 and abstract expressionist painter Mark Rothko had just landed the biggest commission in the history of modern art. With the help of his assistant, Rothko frantically struggles against his insecurities while trying to create a definitive and moving body of work. Electrifying and captivating, this winner of the Drama Desk Award and Tony for best play investigates the conflicts inherent in the tension between a great artist’s desire to be understood and respected.

A Christmas Carol – November 13 – December 24 The beloved classic of loss and redemption returns to IRT’s snow-covered stage! Dickens’ characters bring new life every season in this faithful, fanciful and frolicsome adaptation. It’s Indy’s favorite holiday tradition. Experience it for the first time all over again!

Good People  – January 7 – February 1 Single mother Margie Walsh may be on her last leg financially, but she hasn’t lost her sense of humor. Could reconnecting with an old sweetheart be the answer to all of her struggles? In this intensely observed portrait of a poignantly brave woman who is down on her luck, Pulitzer Prize-winning David Lindsay-Abaire, lights up the stage as he considers whether it is strength of character or just plain luck that ultimately determines our fates in today’s America.

The Giver – January 20 – February 22 No pain. No desire. No choice. Sameness reigns in a utopian society set in the not-too-distant future. But for twelve-year-old Jonas, his controlled and predictable life is unraveling before his eyes. Based on the award-winning book by Lois Lowry, this complex and controversial story forces us all to question the dangers of conformity and the power of truth.

The Hound of the Baskervilles – February 18 – March 15 Join Sherlock Holmes and Dr. Watson as Baker Street’s fabled detective duo investigate a deadly threat to the heir of the Baskerville estate. Will Victorian London’s keenest mind deduce the source of the monstrous mongrels before they claim another victim? Family secrets, haunted hounds, romance, and mysteries abound in Sir Arthur Conan Doyle’s timeless tale of supernatural suspense.

What I Learned in Paris – March 17 – April 12 1973 Atlanta. The politics of race, class and gender are rapidly transforming as the city elects its first black mayor. What better time to begin a romantic escapade than during the eve of an historic election? Old loves rekindle and new loves ignite in this expertly funny and delightfully urbane love story.

On Golden Pond – April 14 – May 10 As Ethel and Norman return to the familiar summer ritual of their tranquil vacation home on the water, they get a surprise guest in the form of their daughter’s young stepson-to-be. This tender tale paints an honest look at the labors and liveliness of a couple in the midst of their twilight years. This beloved Tony Award winning play reminds us that each moment we receive is a gift we share with those we love.