Covering Paik's Funeral by Skip Blumberg and Nine Evenings from 1966 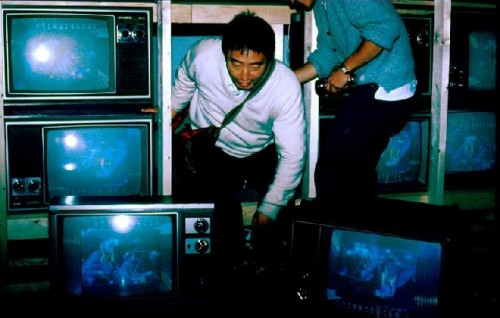 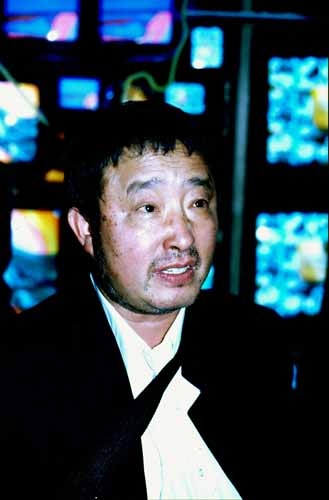 Name June Paik was the most innovative video artist of his generation. 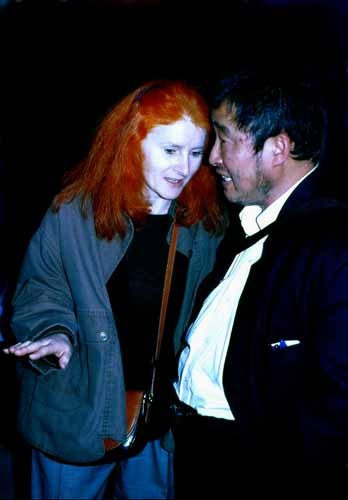 Paik converses with Astrid Hiemer a friend from their time at MIT's CAVS. 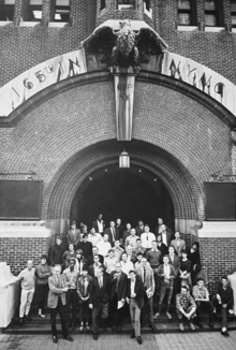 Artists and engineers from the 9 Evenings gathered on the steps of the Armory. 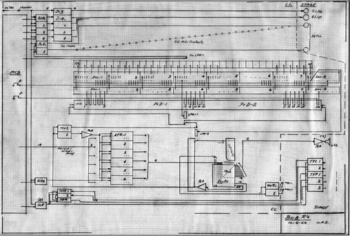 An engineering diagram for Open Score by Herb Schneider from the Rauschenberg performance.

With great anticipation but mixed results we recently viewed two new art video DVD releases. The first offered insights into the work of the late Nam June Paik, arguably, the greatest innovator in the increasingly ubiquitous field of video art. The second release offered a chance to own an archived document of the famous Rauschenberg tennis match performance from the legendary 9 Evenings which was included in the overview exhibition at MIT last year. The publisher, Microcinema, has announced that this is the first of a number of releases of the performances from that seminal event.

While we expected to gain valuable insights, and excerpts from the oeuvre of Name June Paik, this did not prove to be the case. Or, at best, marginally so. What we experienced was a conceptual art take on a series of brief encounters with those attending the wake and reception following the funeral of the Korean born artist. We are taken to and guided through this occasion by the video artist Skip Blumberg. We never see him but hear his voice as he sticks the camera and microphone into the faces of many individuals including the famous and not so asking more or less the same generic questions about the importance of the deceased artist. Now and then in editing Blumberg devolved into ersatz Paikian distortions to induce the flavor and influence of the great innovator. There are tantalizingly brief snippets of some original Paik material. Blumberg even offers a brief glimpse of the artist in his coffin.

The list of credits of those encountered would suggest a great document but even the most interesting artists and collaborators proved not to have much to say when having a camera thrust in their faces at a funeral. Blumberg repeated the process at a reception following a presentation of the artist's work at the Guggenheim which is where the Yoko Ono material was viewed.

There is a casual home movie as art feeling to this video. Little or no thought or research went to it. Rather it was a moment and target of opportunity. This would have been a more fruitful and interesting project if the video artist had simply swapped phone numbers with the individuals he encountered and arranged for sit down, in depth interviews alowing time for the individuals to focus their thoughts. The minute or so with Merce Cunningham is fairly worthless here but a serious interview  on Paik would be invaluable.

I viewed this video with my wife Astrid who knew Nam June and his collaborator, Charlotte Moorman, from her years at MIT's Center for Advanced Visual Studies where they were fellows. She has her own Nam June stories which prove to be as  interesting as anything blipped in Blumberg's hodge podge effort.

Following the documentary footage of "Open Score" the Microcinema DVD offers interviews with a number of the participants particularly its primary sources of inspiration the late engineer Billy Kluver, and the artist, Robert Rauschenberg, among other artists and engineers. "It was ahead of its time back then," Rauscheberg commented, "and too late now."

This is arguably the best description of anyone, then and now, who attempts to come to grips with the legendary 9 Evenings. The MIT installation of the documentary materials and snippets of video was tantalizing and insightful but also daunting and an aesthetic conundrum. It is best to just appreciate the incredibly inventive spirit of the occasion and not try overly hard to comprehend its agenda with its elements of success and failure. Even in the vantage of hindsight 9 Evenings continues to be a failure but perhaps a magnificent one that really changed the direction and possibility for art that has only come to be realized in our own time.

Today, the notion of collaboration between artists, scientists and engineers is rather conventional. But in 1966 it was remarkable. As I discussed the new video with students in my Boston University avant-garde class I recalled that I was living in New York at the time and might easily have attended the event. But chose not to. There were actually about 500 people who viewed "Open Score." With typical humor Rauschenberg commented in the video that the number dropped to about 45 for the next performance after scathing reviews came out. Of course hindsight is 20/20 but based on the performance, a tennis match between the artist Frank Stella and Mimi Kanarek in which a loud bong accompanied each sweep of the racket and the accompanying dimming of a floodlight, were the negative reviews right or wrong? Even adjusting for such issues as historical importance and experimentation in an informal poll of student reactions their assessments ranged from 5 to 7 on a scale of one to ten. Basically, I wouldn't disagree with that.

But the MIT show while daunting and dense with information and displays of now primitive technology was enormously important as is this series of related videos. The dinner with some of the artists and surviving engineers after the opening of the MIT exhibition was remarkable. It was riveting to hear them speak of this collaboration. For the engineers it was their first real introduction to the thinking process of artists and for the artists it was a unique opportunity to expand their ideas through a challenging encounter with engineers. While clearly both the artists and engineers benefited from the collaboration, then an now, this euphoria of creativity failed to fully reach the audience. But isn't that a measure of art that pushes limits and creates possibilities to get it right the next time? How often does art that fails prove to be more important than art that succeeds? Success is easily forgotten while failure has a way of lingering.