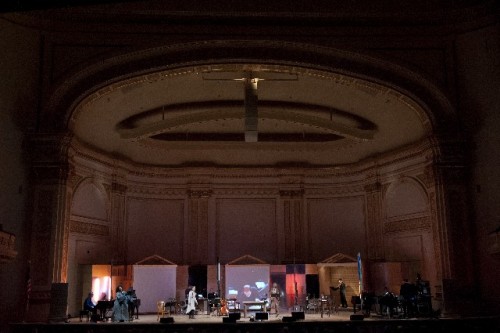 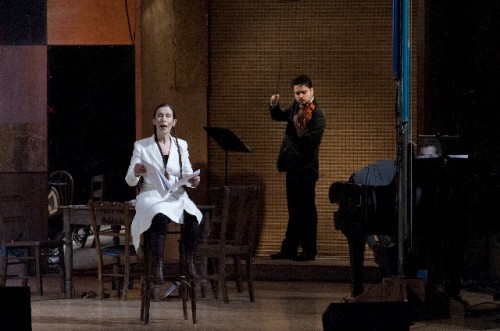 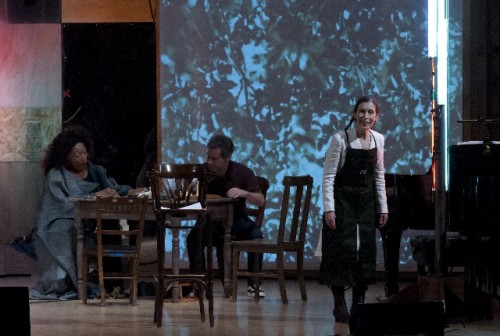 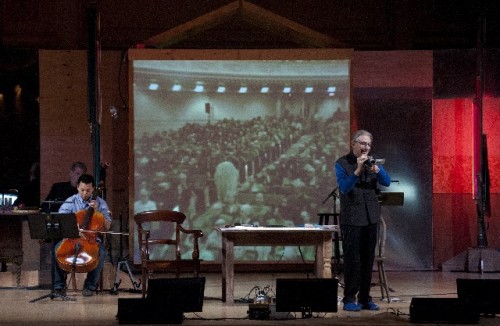 Tilson Thomas conducting a cellist and whatever else in Song Books.

Maverick means willfully independent.  For the composers gathered under this wonderful word-umbrella last night at Carnegie Hall being maverick is a natural condition, not one that is willed or imposed.

In ‘Song Books,’ Cage ignored history for the first time, bringing in the old and new as they cropped up without regard to 'moving forward.'  Black flags were raised, symbols of anarchy and also the entire earth. A painting materialized.  "a e whiz not m et th t s for e eat," a selection of words and sounds from a Cage favorite Henry David Thoreau, emerged.  In his journals Thoreau wrote about the sounds around him, not just beautiful bird song, but cat-owls and honking geese. They were among the sounds offered up on stage.

The marvelous maverick conductor, Michael Tilson Thomas, wove through the evening without losing a step, which freed him up to actually use his feet from time to time as he conducted.  For ‘Song Books,’ he conducted by sticking on his chest blue paste-its that matched his shirt.  He clearly had a good time with his divas including that force of nature Jessye Norman, moving like Judith Jamison in her crushed silk full-length coat.  Her every note made you want more.   When she wasn't singing she played cards and chess. This form may also be about desire.

The genius of ‘Song Books’ is that it encourages these special singers, Norman, La Barbara and Monk, to articulate the center of their singular voices. Instead of being confined by a composer they were set free to display not only their particular timbre but also humor.

Politics stayed out until the end when Monk pronounced Thoreau’s dictum, “The best form of government is no government at all.” The lyrical final moments were angelic with La Barbara intoning a kind of still plainchant while Norman delighted in Eric Satie, another Cage favorite.

Cage laughed when asked if this was art.  "It resembles a brothel, doesn't it?"

Early on Cage writes about the inevitable use of all kinds of sounds in music but later he seems more interested in surprise, however it comes about.  He changes the relationship between composer, performer and audience.  Yes, we had talent roaming the aisles at Carnegie.

The evening offered a sense of what independent composers gather around them to make music.  Cowell famously looked both East and West, often using music he heard in the Japanese and Chinese districts of his native San Francisco.

Adams uses Beethoven, particularly figures from the string quartets and even the Ninth Symphony.  As he weaves a string quartet into the orchestra, so he seamlessly weaves in Beethoven.  Great entertainment in ‘Absolute Jest,' Adams' first major orchestral work since his ambitious 'City Noir.'

With Beethoven bits bouncing off the walls, ‘Absolute Jest’ has all the chugging rhythmic and contrapuntal complexity we expect of Adams. Beethoven’s fantastic 'Grosse Fuge' was the jumping off point.  Adams’ use of the orchestra was imaginative and surprising. Piano, harp and cowbells were tuned in pure, or just intonation, which helped connect Beethoven to the maverick tones of Lou Harrison and Terry Riley.

Adams acknowledged his jester side as he wandered around Carnegie. ‘Absolute Jest’ seems, however, as much a trickster piece as some of his work from the 1980s, when he wrote: modernism, no.  Yet the composition got a hot performance 'Absolute Jest' under Tilson Thomas. The St. Lawrence Quartet could not sit still they were so excited. And excitement was infectiously conveyed.

Varese, with his sirens and screeches is often said to appropriate the sounds of the modern city, but Varese said it represented the mind at work.  Enough of quiet.  A huge orchestra with a very prominent percussion recalled Stravinsky and Debussy, major influences.  The percussion sounded wild and original.  The playing was, as it was all evening, arresting.

Too bad we can't make noise with language when we write.  We are left with words like tintinnabulation (John Adams uses this) and etcetera.  Tilson Thomas offered a must-go-to evening for young people and old and he delivered.