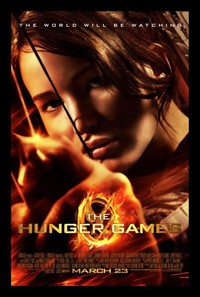 The Hunger Game grossed $155 million during its first weekend. 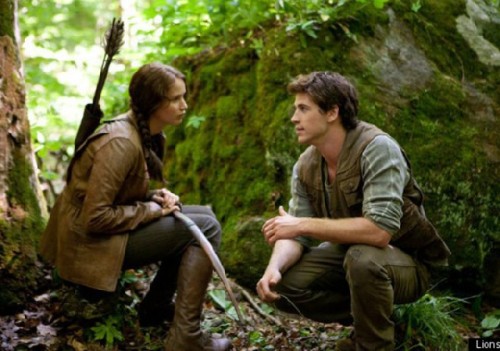 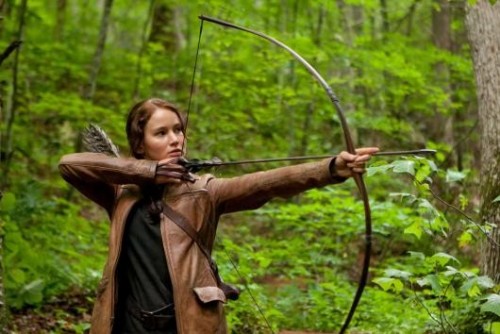 Katniss can nail a squirrel in the eye. 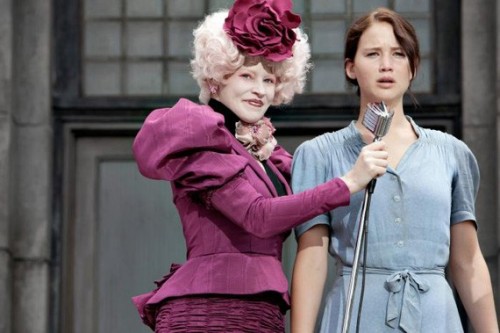 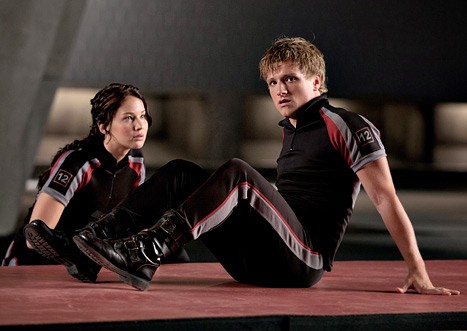 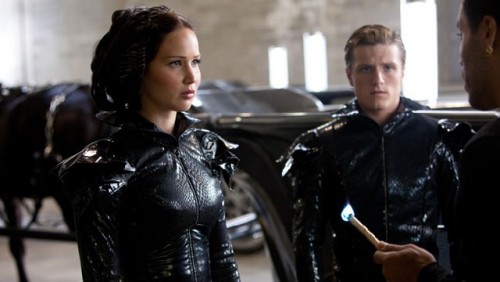 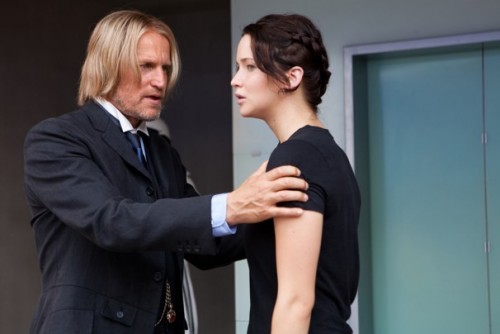 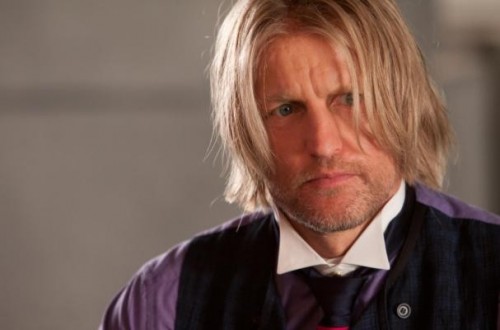 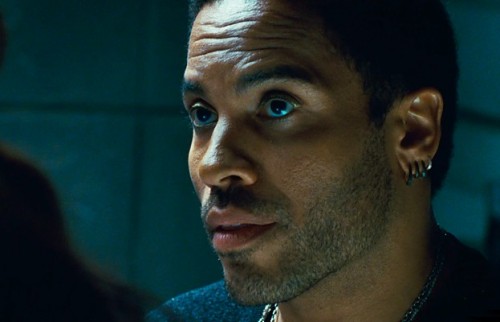 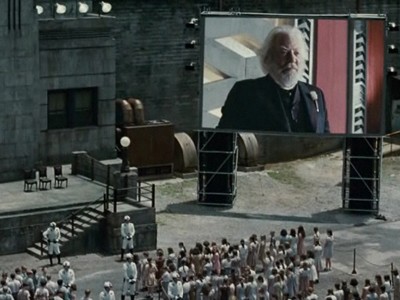 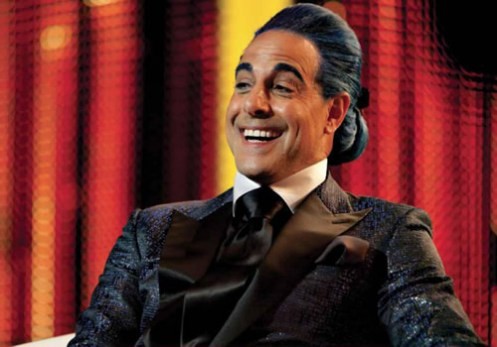 An over the top TV host Caesar Flickerman (Stanley Tucci)/ 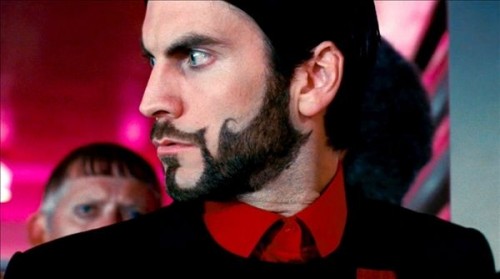 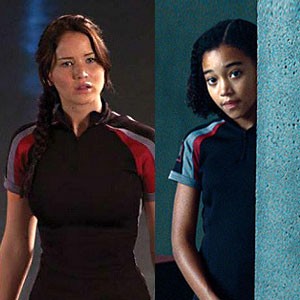 Grossing a record setting $155 million on its first weekend. Coming to a cinema near you.

Our local North Adams Cinema, about as far from Tinseltown as it gets, sold out the Saturday night screening. Packed with students from nearby MCLA it seems. On a Tuesday, five dollar night, the audience was near to full. Trust me, a rarity hereabouts. But in a chat with the assistant manager, seems it happens from time to time.

Frankly, I was fairly clueless about the best selling trilogy by novelist Suzanne Collins. We went through a combination of factors: Curiosity, being a part of an historic phenomenon, and getting out of the house on a weeknight.

So we had an early supper and headed for the movies.

During the opening scenes in Appalachia like, dirt poor District 12, the hauntingly beautiful Jennifer Lawrence took off from where we last experienced her, in a similar setting, in the powerful independent film Winter Bone. She earned an Oscar nomination for her poignant performance.

She is the glue which binds this generally farcical, Sci Fi, fantasy and teen gladiator film. Frankly, without her compelling performance that combines humanity, vulnerability, archery and survival skills with the will to live and rejoin her family, there would be little reason to sit through a cartooninsh and predictable 142 minute Hollywood blockbuster.

The sequel Catching Fire is already in the works as well as planning for the third sequence.

Throwing Christians to the lions and gladiator contests have been packing movie houses since Ramon Novarro’s famous chariot race in the 1925 silent film classic Ben Hur. Kirk Douglas thrilled audiences in the 1960 epic Spartacus. Russell  Crowe won an Oscar for his role in Gladiator which earned five Oscars including Best Picture in 2000.

Come Oscar season, which is a long way down the road, Hunger Games is likely to have its share of nominations. Perhaps for Lawrence’s compelling performance and a lock for those outrageous costumes, makeup, and sets.

There was an interesting contrast between grimy District 12 and The Capitol presided over by Donald Sutherland as President Coriolanus Snow. Our first hint of the difference between town and country occurs when the outrageously attired, super bitch Effie Trinket (Elizabeth Banks) arrives in dirt town to preside over the random selection of Tributes. There are two from each of the twelve enslaved districts, to compete in a blood sport that is designed to have a single survivor.

Prim (Willow Shields), the younger sister of Katniss Everdeen (Lawrence) is selected for certain death. Katniss shocks and fascinates the citizens of the nation of Panem (formerly North America prior to an unidentified apocalyptic event) by volunteering to take her place. Their father perished in a coal mining accident. As the older sister Katniss has managed to put food on the table by illegally hunting small game and bartering squirrels for necessities.

A compelling motive to win The Hunger Game is to return to her mother and sister who will starve without her hunting skills. The game necessitates killing humans rather than animals.

It is a tribute to Lawrence’s acting ability that she conveys reasonable doubt in acquiring a killer’s instinct during the blood bath of the game. A simple country girl she is also required to win over all important sponsors. She must also resolve the conflict of what to do with Peeta Mellark (Josh Hutcherson) the baker’s son and fellow Tribute from District 12. It seems he loves her. While she prefers the wooing of Gale Hawthorne (Liam Hemsworth) the boy she leaves behind.

They live in pampered luxury while being introduced to the citizens of Panem, during mass rallies, televised interviews, and brief training prior to the games. Evoking ancient Rome there is even a chariot parade with the twelve sets of Tributes. Shades of Ben Hur.

On the 200 mile an hour bullet train from District 12 to the Capitol the rustic pair are exposed to the luxury and decadence of their Orwellian captors.

They are to be mentored by a former winner of the game Haymitch Abernathy (Woody Harrelson). In yet another brilliant, over the top performance the blond wigged former Natural Born Killer is a cynical drunk. He appears to be useless regarding any real advice and support. That gradually changes as Harrelson is allowed to bring some dimension to the role. Recently we saw him as the McCain/ Palin campaign manager in the wonderful HBO film Game Changer. The vivid contrast between these two  performances is a stunning tribute to his considerable chops.

My goodness. Was that really Stanley Tucci as the hilariously overplayed, foppish TV host Caesar Flickerman? It is his task to enticingly dangle the raw meat of innocent contestants before a blood thirsty, morally depraved audience.

Which begs the question. Are we, the audience jammed into crowded theatres munching popcorn in the dark, any less morally bankrupt? Is there really any critical distance between us and the Romans in the Coliseum? We may argue that the death and mayhem we gobble is simulated, not real, and thus just fantasy and entertainment. In Spain it was honest and real when we saw the matador plunge a sword into the heart of a raging bull.

Truth is lots of Americans like to kill things and watch things getting killed. In District 12 Katniss shot game to put food on the table. Lots of hunters like to whack Bambi, not for food, but the thrill of the slaughter. What about boxing matches, hockey games, race car accidents? Or the recent NFL sanctions against the New Orleans Saints for bounty hunting and payoffs to players for injuring other players? How much violence is there on any given night on TV?

As a ratings strategy, to assure the largest and youngest possible audience, The Hunger Games actually toned down the on screen violence. You saw a victim before and after the fatal blow. There was more emphasis on the sport of the game. The cleverness of strategies and survival skills.

Cinna (Lenny Kravitz) who conveys warmth and compassion for Katniss gives her good advice. Launching the game the 24 contestants form a ring around a cornucopia of supplies, food, weapons. This stash includes a bow and arrow. But Cinna advises her not to go for it. Instead, grab a back pack and head for the hills. There will be a predictable blood bath around the cornucopia.

Within minutes the field of contestants is reduced by half as Katniss bides her time in the familiar woods. As in the film Truman there are cameras everywhere bringing the game to a vast television audience including public screens back home in the districts. Also, as in Truman, there is a control room where operators execute special effects that manipulate and accelerate the action.

The master of the game is Seneca Crane (Wes Bentley). To emphasize his smarmy character Seneca has a magnificently sculpted beard. This fashion statement is sure to be emulated. He’s in trouble with the President by allowing Katniss to evolve as a heroine for the television audience. This is bad for morale as the point of the games is not to make heroes of the Tributes. There is also a romance issue as Peeta on TV confessed his love for Katniss.

Is this real or a survival strategy for Peeta? He knows that he can’t compete with her skills and is outmatched by the other contestants. Their alleged romance, televised, may translate into all important sponsors. Does she fall for him, gradually, or just see the wisdom of the game plan? It results in a decision to modify the rules to have a pair of winners if they are from the same district.

Well, this must be TMI. Sorry to give it all away. But perhaps you have already read or seen Lord of the Flies. The bad kids gang up on the good ones.

Which is to say that there is little or nothing original or profound about this pap and pastiche. Harry Potter is ten times more original. Yet, how to explain the public feeding frenzy and fan base like that for the launch of Star Wars?

Ok. Ok. Yeah. I admit. I can’t wait for the sequel Catching Fire.

About 99% of that is fueled by an opportunity to see more of the phenomenal Jennifer Lawrence. Be still dear heart. Parting is such sweet sorrow.