Performers Announced for September 20 to 23 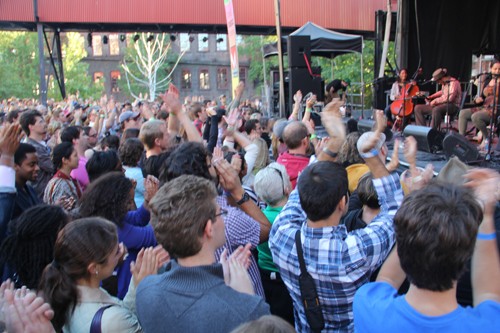 Securing its place at the forefront of the bluegrass and roots music scene, the first wave of acts announced for MASS MoCA's expanding FreshGrass festival (freshgrass.com) includes legendary bluegrass pioneers, genre-bending bands, and groundbreaking contemporary traditionalists.  A new main stage, located on MASS MoCA's expansive and grassy "Joe's Field", has been added to this year's festival.  A full slate of afternoon and evening performances-as well as late-night, hoedown-style barn dances-is scheduled for the weekend of September 20-22, 2013.

Securing its place at the forefront of the bluegrass and roots music scene, the first wave of acts announced for MASS MoCA's expanding FreshGrass festival (freshgrass.com) includes legendary bluegrass pioneers, genre-bending bands, and groundbreaking contemporary traditionalists.  A new main stage, located on MASS MoCA's expansive and grassy "Joe's Field", has been added to this year's festival.  A full slate of afternoon and evening performances-as well as late-night, hoedown-style barn dances-is scheduled for the weekend of September 20-22, 2013.

The museum will roll out additional acts on its FreshGrass website (freshgrass.com) this spring.

"FreshGrass will grow substantially this year: we are adding a second large-format outdoor venue on a grassy field in the middle of the MASS MoCA campus, and our complete roster of performers will include over 20 bands, up from the baker's dozen we featured last year," says Chris Wadsworth, whose Manitou Media is a co-producer of the event.  "We'll be rolling out additional bands over the next few months.  Stay tuned to freshgrass.com for details."

Also new to the festival this year is The FreshGrass Award -- $10,000 in cash prizes awarded for fresh takes on bluegrass music, an opportunity for rising talent to gain experience in front of seasoned performers, professional presenters, and other industry veterans.  The Award's top prize will include recording studio time at Compass Records in Nashville and a chance to perform at FreshGrass in 2014.  Details are available at freshgrass.com

. "Such an awesome setting, and a wonderful audience to boot," raves Compass Records co-founder and veteran FreshGrass performer, Alison Brown. "It was one of our very favorite festivals in recent memory."

Also new to this year's festival will be FreshGround, a downtown tent site just a ten- minute walk from the MASS MoCA campus.  "We're still working on details and on obtaining final approvals from the city, but discussions are well under way with North Adams city officials," says Jodi Joseph, museum spokesperson. "The FreshGround tent site will be located in downtown North Adams, near local restaurants, bars, and retail stores, and only a short walk from the MASS MoCA / FreshGrass festival site."  Details will be posted at freshgrass.com as planning is completed.

In addition to the contest, workshops, camping, and a virtuosic wonderland of bluegrass and roots music, festival events include children's programming and local food and beverages, including the moonshine slushies that became legendary at last year's festival.  Admission to MASS MoCA's spacious, light-filled art galleries-- where festival-goers will find pop-up concerts set amidst MASS MoCA's exhibitions of contemporary art-- is included with festival admission.

"This festival grew significantly from 2011 to 2012, and we're looking forward to welcoming even more friends and families to the festival this year," said Joseph Thompson, founding director of MASS MoCA.

FreshGrass continues to be one of the best values in the festival world.  Early-bird festival passes are available for $68 for adults, $58 for students. After the early-bird tickets are gone, general admission pricing will be $78 for adults, $68 for students, $38 for kids 6-16, and free for children 5 and under.  Museum members receive a 10% discount on the regular prices, but membership discounts do not apply on the early-bird prices.  Day passes will be available closer to the event.

Tickets are available through the festival website (freshgrass.com) and the museum website (massmoca.org) or by calling the MASS MoCA Box office at 413 662 2111 x1. The Box Office is located off Marshall Street in North Adams, and is open from 11am to 5pm, closed Tuesdays.  Festival-goers are welcome to bring chairs, blankets, and cushions to sit on but should leave coolers and picnic baskets at home.  The festival will be held rain or shine.

Exhibitions on view during FreshGrass include, among others, Xu Bing: Phoenix, a monumental display of sculptural phoenixes, each stretching nearly 100 feet in length and weighing over 20 tons in all; One Minute Film Festival, featuring over 600 micro-films; Life's Work, focusing on two artists, Tom Phillips and Johnny Carrera, who have spent their entire careers making art from - and about - single books; Love to Love You, a show of artists who explore the essence of being a fan in today's popular culture; and two solo exhibitions, one of New York-based painter Joseph Montgomery and the other of Paris-based sculptor Guillaume Leblon.