The Elixir of Love at New York City Opera 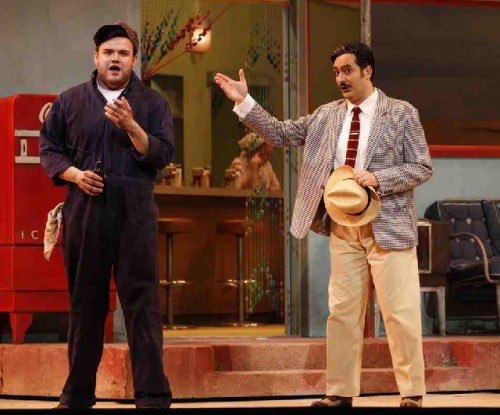 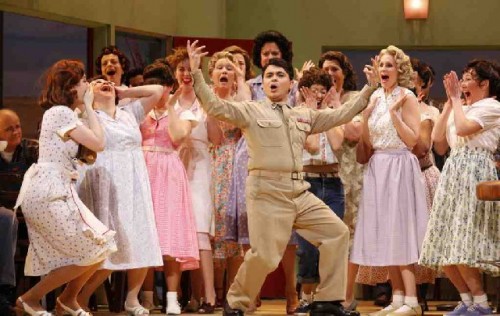 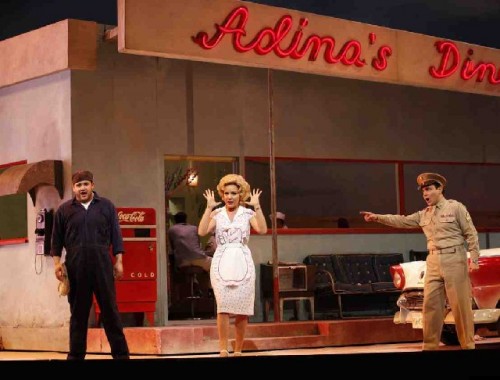 The New York City Opera has revived Jonathan Miller’s production of perhaps the most delicious of operas, The Elixir of Love by Gaetano Donizetti.

Staged in the American Southwest at Adina’s Diner, Miller makes the most of gas pumps and mops as microphones prompting an aria now and then.  There are conga lines, and big dips, a backbend kiss that looks like Times Square 1945, and so many charming references to enjoy!

The timelessness of Donizetti’s opera, composed in just over a month, is clear.  What young man has not been hopelessly smitten by a girl everyone else wants?  Who hasn’t been tempted by potions, pills and devices to enhance appeal?  Unfortunately the good guy does not always inherit a fortune and win the girl, but sometimes he does, and there is always hope of an Elixir of Love outcome.

Stefania Dovhan is a charming Adina, kicking up her heels and swishing too as she engages in long bel-canto lines.  In this production, she is more business-like than her early 19th century counterpart.  She runs a Diner and like many modern women, her competence contributes to her attraction.  Her Sandra Dee-Gidget ‘doo tops a light, lyric, and yet robust voice.

Jose Adan Perez, making his City Opera debut as Belcore, sweeps in to scoop up Adina, his bride for the day.  In his rich baritone enhanced by clarion tones, he suggests attention should never be focused on one love interest.

A focal point was the new young Mexican tenor, David Lomeli, who sang beautifully.  He has an arresting squillo, that bell-like trumpeting tone,  and a warmth in his voice.  While he may have over-responded to stage direction, and his boyish face makes you wonder how much manly passion is rising for the beautiful Adina,  he created a stir and elicited wild bravos. Perhaps he will fall in line with the other tenors who have succeeded in this role, Caruso, Gigli, Gedda, Pavarotti and Domingo, but that is a very tall order.

Peddling his cures, Dr. Dulcamara arrives in a 50’s Chevrolet convertible and leaves in it too, having doled out an elixir that clearly worked, much to his surprise.  Played by Marco Nistico, he swaggers his way through to triumph.  Meredith Lustig sings several lovely turns as Giannetta.

‘Una furtive lacrima’ brought forth a single tear and much applause frpm members of the audience. This male Cinderella story has universal appeal when it’s staged as well as this City Opera production.  Brad Cohen conducted the orchestra briskly and beautifully.

The music is delightful across the boards, but its compelling effect is not simply because it is lovely, but rather because the composer created arias to reveal the emotions of each character. The singers captured the shrewd contrasts.  Lomeli and Perez brought forth the different tone of their characters in the ‘Vendi scudi’ duet and Dovhan and Nistico sing with all the comic irony of ‘Quanto amore!”  Even in the flowery lines of ‘chiedi all’aura’ the words were tidy.

Felice Romani was the most sought after librettist of his time.  Taking up the effects of the gothic novel, emotion explodes, love is overwhelming and produces conflict, giving scope for various dance and crowd scenes.  Here the personal drama is played out against the background of diners, village gossips and soldiers passing through.

Today it’s still obvious that Romani was worth it, but sad to think that Donizetti once wrote, “Why has Romani refused me four times? Does he hate me?”  Yet Romani traveled across Italy to the composer’s bedside as he lay dying.   What they created together on stage, brought to joyous life by the City Opera, is pure delight.  Let the music be your elixir.