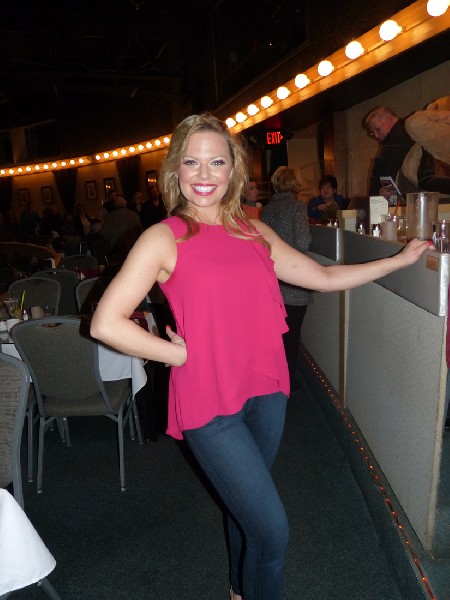 Fun at Beef and Boards with Crystal Mosser. Giuliano photo. 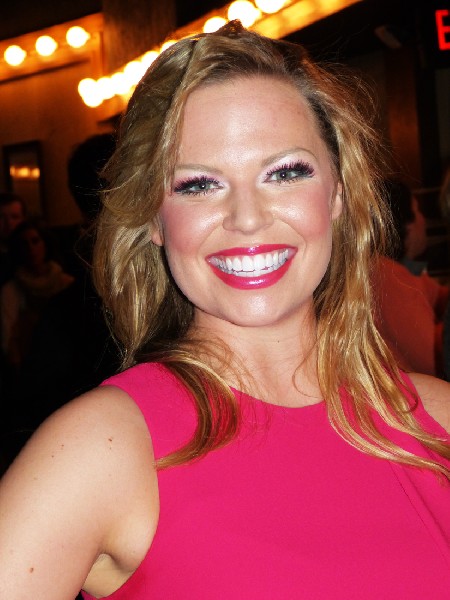 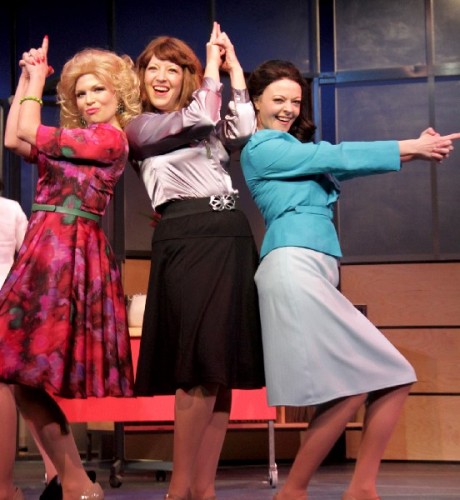 Working girls just want to have fun at the office. 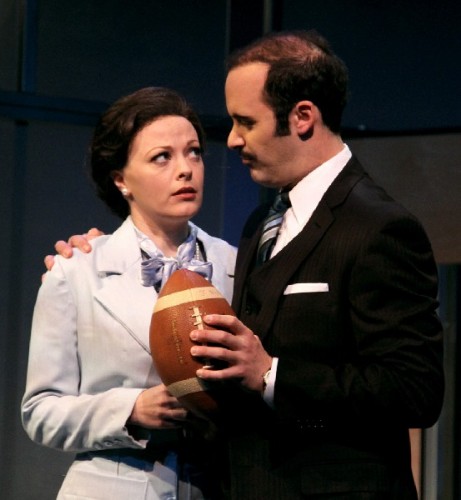 The new girl has to play ball with the boss. 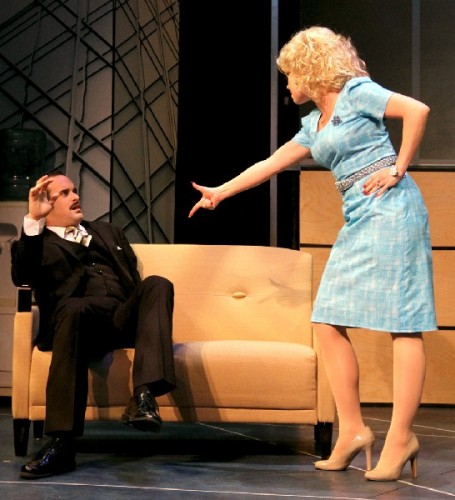 Doralee threatens to turn the boss from a rooster to a hen. 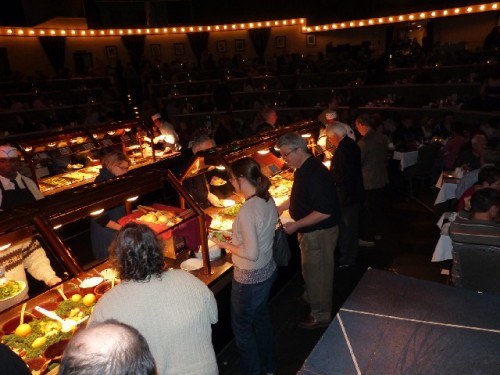 A generous spread at the buffet. 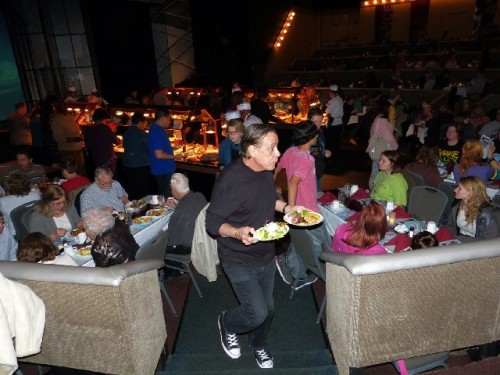 An ATCA member returns from the buffet. 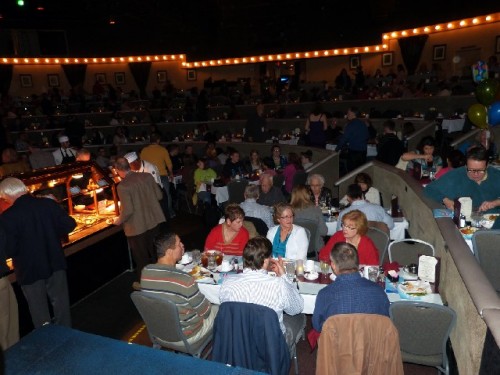 Generous seating at Beef and Boards.

It is possible that I attended dinner theatre in the 1970s. Perhaps in suburban Framingham, Mass. But frankly, I don’t really remember.

So this lively, campy encounter with Dolly Parton’s musical 9 to 5 at Beef and Boards in Indianapolis was more or less our first encounter with the once widely popular genre of dinner theatre.

It comprises a buffet with an evening of populist entertainment. Kind of panem et circenses for the masses so to speak.

The forty-year-old arts organization agreed to a special, sold out matinee, to accommodate our group of forty for the American Theatre Critics Conference meeting. That allowed Lou Harry, the organizer of the program, to lead us on to the evening performance by Michael Feinstein and Barbara Cook that followed.

In conversation with colleagues this was the kind of mainstream musical comedy that most critics go out of their way to avoid.

It was such silly fun.

But some of the lyrics and jokes about Dolly’s famous Double D’s kind of fell flat when you checked the rack of the perky and sensational, blonde bombshell Crystal Mosser who played Dolly’s role as Doralee Rhodes. She is shunned by her co workers who assume that she sleeps with the boss, Andrew Lebon, as Franklin Hart Jr.

Through the magic of video Dolly makes a cameo appearance in this production. Her broad humor helps to flesh out the musical.

The one who wants to shag the boss is his executive secretary, Roz Keith, played nicely by Joanna Krupnick. Hart doesn’t see her as anything more than a gopher to fetch his coffee and do his bidding. So the girls, really, hate her.

This feminist themed comedy had some political edge back in 1980 when the film starred Parton with Jane Fonda and Lilly Tomlin. Parton’s theme song, the engaging and snappy “9 to 5” was expanded into a Broadway musical. But, frankly my dear, it’s at best a one hit wonder.

A point that was largely lost on a capacity enthusiastic audience including a couple of bus loads of school groups.

Fortunately, while adolescents, they were mature enough to brush off the raunchy humor which included a guy running around with a boner and the boss air humping when not looking down or up Doralee’s dress.

There’s a bit of R Rated S&M when the fed up, rebellious secretaries capture the boss and put him through the ringer.

While they take over the office and run it efficiently their way Roz is sent packing to learn French. Hart’s wife is away on a month long shopping spree so they have that window to bind and gag him while seeking blackmail evidence.

We learn that Doralee’s no dumb blonde. She knows what’s going on and what her colleagues think of her. But she puts up with the sexist crap because she needs the job. Until she learns that the boss is spreading rumors that he is sleeping with her.

That’s the last straw. Pulling a gun Doralee has the best line of the play when she points at his privates and threatens to “turn him from a rooster to a hen.”

The plot, such as it is, revolves around the recently divorced new girl Sarah Hund as Judy Bernly. She doesn’t know squat about office work but the boss sees her as a fresh chicken to pluck.

Of course it is really Annie Edgerton as Violet Newstead who keeps the office humming. But she is furious when, yet again, she is passed over for promotion. The job, so what else is new, is given to the dude she trained.

This is, after all, another era.

The fact that a chick was just appointed to head the venerable Secret Service is all you need to know about how dated is this musical.

But, what the heck.

Of all those dinner theatres that thrived decades ago Beef and Boards is one of just seven national equity companies.

Overall it was a terrific cast and amazing to think that there are just ten days between shows. Depending on how they do at the box office the musicals run from five to eight weeks.

Slated for the fall is a premiere of  Les Misérables which is incredible if you think about it.

So, yes folks, dinner theatre is alive and well at Beef and Boards in Indy which is looking forward to its centennial season just sixty years from now.

Also new to Beef & Boards and the next on its stage is the hilarious celebration of women and the change: Menopause, The Musical. Written by Jeanie Linders and set in a department store, Menopause, The Musical brings four women together who have little in common other than a black lace bra. The ladies make fun of their woeful hot flashes, forgetfulness, mood swings, wrinkles, night sweats and chocolate binges in this production that includes parodies from the ‘60s, ‘70s and ‘80s. On stage March 27 through May 12.

The Sound of Music, the iconic work of Rodgers and Hammerstein, opens May 16 and continues through June 30. As the 2013 Family Show, the production offers $10 discounts off tickets for kids ages 3-15. Follow the adventures of free-spirited postulant Maria as she is sent from the convent to become a governess for seven children of Captain von Trapp in Austria during World War II. With stories and song, she transforms the home and hearts of this rigid family. Adapted from “The Story of the Trapp Family Singers,” it was written by Russel Crouse and Howard Lindsay, with music by Richard Rodgers and lyrics by Oscar Hammerstein II.

Summer brings the return of the hit Smoke on the Mountain, opening July 5. One of the most popular shows in Beef & Boards’ 40-year history, this musical follows the Singing Sanders Family, who is invited to perform at Mount Pleasant Baptist Church by its new pastor, the Rev. Oglethorpe. Enjoy the “signing” sister June, and all your favorite characters as they perform energetic bluegrass and Gospel tunes and share stories that will touch your heart and leave you laughing. Book by Constance Ray. Conceived by Alan Bailey. Musical arrangements by Mike Craver and Mark Hardwick. On stage through Aug. 18.

Ready or not, Stanley Banks is about to be the Father of the Bride, on stage Aug. 22 through Sept. 29. His daughter has announced her engagement and the preparations begin for a “small” wedding. But as the plans and the guest list grow rapidly, so does the debt – and the stress! Mr. Banks is surrounded by caterers, dressmakers, florists and furniture movers, and faces the unthinkable when his daughter calls the whole event off. By Caroline Francke, from the novel by Edward Streeter.

The musical phenomenon Les Misérables makes its Beef & Boards debut Oct. 4 through Nov. 24. Journey with Jean Valjean as he finds redemption against all odds in the corruption and chaos of revolutionary France. An eight-time Tony Award winner, Les Misérables is the struggle, the score and the story that has captivated millions around the globe. Based on the novel by Victor Hugo, music by Claude-Michel Schönberg, and lyrics by Alain Boublil and Jean-Marc Natel.

The holiday season is time for the annual celebration A Beef & Boards Christmas, opening Nov. 29. This variety show has been a tradition at Beef & Boards for over 20 years, and makes the most of the season, with beautiful music, energetic dance numbers, colorful costumes and stirring voices. Gather with friends and family for this original production, on stage through Dec. 23.

Plus Beef & Boards brings back its one-hour musical adaptation of A Christmas Carol for select dates in December. This classic, enhanced with holiday carols, tells the timeless Charles Dickens story of miserly Ebenezer Scrooge whose cold heart warms with the visits of several spirits on Christmas Eve.