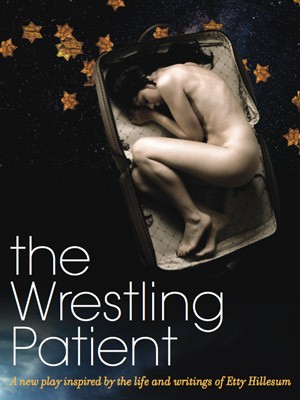 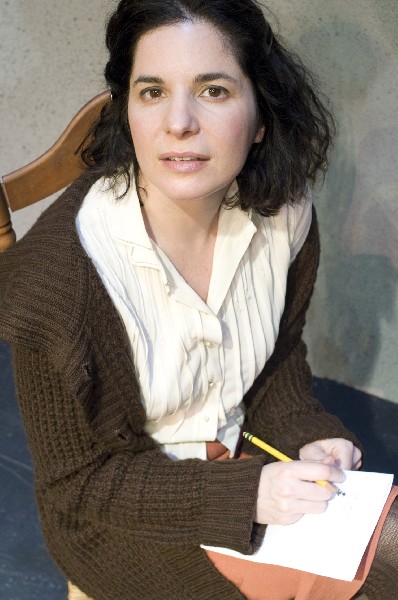 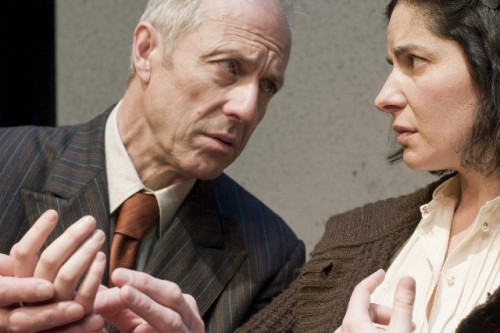 Will Lyman and Anne Gottlieb in The Wrestling Patient

The SpeakEast Stage Company is presenting the World premiere of The Wrestling Patient, a play based on the true story of Dutch Jewish writer, Etty (Esther) Hillesum. As Amsterdam is overwhelmed with the terrible realities of World War II, Etty is confronted with the horrible choices of maintaining some kind of personal integrity or saving her own life. With the help of a mentor, she enters the emerging science of psychology. Here she wrestles with the demons within herself as well as those of an awful time. This production brings to light Etty's secret history of musical evenings, therapeutic wrestling matches, stolen strawberries and midnight prayers. This is a story of a highly intelligent, sensitive, perhaps depressed woman's personal transformation during a period of darkest hours.

The premise is grand, but sometimes an idea is better than its reality. This is the case of The Wrestling Patient. For the most part all of the pieces were there for The Wrestling Patient to succeed: A great story to work from, wonderful acting for the most part, a lovely, vulnerable protagonist, Etty, her dysfunctional family, an older intellectually disconnected lover, a symbolic continually changing evil presence, the Wrecking Ball, a well-designed set, poignant lighting and even some occasionally engaging dialogue. However, the sum of the parts did not make a great whole. This was due in large part to an overly long, wordy and needed to be edited script. There was a conscious effort by the playwrights to try to literally throw everything into the mix of the story. This includes the terrible plight of the Dutch Jews in WWII, as well as the delineation of the variously unhinged members of the Hillesum family, without distilling each person's actual essence.

All the actors were quite good, even excellent. Unfortunately, the script needed to be tighter and less wordy. The performance of Etty was outstanding. This was a difficult, nuanced role superbly performed by Anne Gottlieb. Etty was the only fully formed character in the play. Gottlieb's portrayal is strongly vibrant and vulnerable without being weak. Her performance was a tour de force! The older man psychologist Julius Spier (Will Lyman) and Etty's relationship was problematic. He was portrayed more as an almost decrepit retiring 75 year old rather than an intellectually vital, amorous 55 year old. The love affair between an unclearly aged Etty (was she late 20's or mid 30's?)  and him did not actually resonate. Was this because of direction, the script, or casting? Maybe, it was a bit of all three.

The strongest presence besides Etty was the Wrecking Ball (Will McGarrahan). This character represented death, the Nazis, authority and malevolence. This was a difficult role brought off with great sensitivity. Will McGarrahan made evil almost plausible at times. Here was the devil incarnate being rather logical. His swagger and attitude led credence to an internal and external characterization.

Etty's brothers were both flawed and mentally ill. One was rather conventional, tall and well dressed while the other was supposedly a great musician who did not allow anything to be played on the radio or victrola other than classical music. The musician was portrayed rather crazy while the other one just appeared to be a bit conflicted and spoiled. Her mother was an immigrant from Russia who had escaped from the violence of the Cossacks. She appeared, however, to be quite middle class Dutch, genteel in everyway except in regard to  relationships with her children. Was she educated? She appeared elegant and articulate. Etty's father was a Latin scholar who carried a book around with him and read quotations, even defined words. Was this his vocation (a professor) or avocation? Symbolically, he was the Jewish scholar, the detached individual observing the greater society but not part of it. Like several other aspects of the play, there was a lack of individual focus as it never was made clear.

The two acts were quite different. Act One had great energy. Act Two seemed a bit sleepwalked. If that was the intent then the line needed to be drawn more clearly between wordiness and performance. The second act dragged. In fact the play could have easily been tightened  by 20 to 30 minutes over all. This leads to the dilemma of the production: The parts were for most part were excellent while the overall effect was less good.

The story could have been more evocative of the WWII period, the characters more fleshed out. The poignancy could have been more penetrating, focused. While the narrative was being spoken by a writer, wordiness was not necessarily the best tool to involve the audience. The pace and energy needed to be heightened. Like a novel that has good characters but ends awkwardly or strangely, this play was unsatisfying. With editing, tightening and some refinement, this play could be a major theatrical event.