King Lear at Theater for A New Audience

Michael Pennington Is a Nuanced Lear 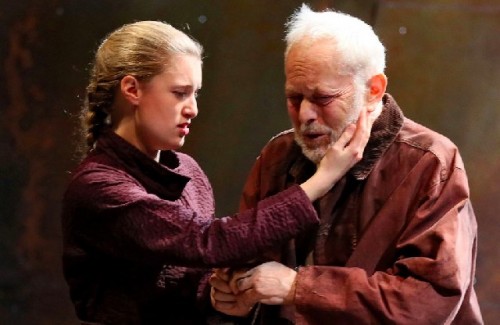 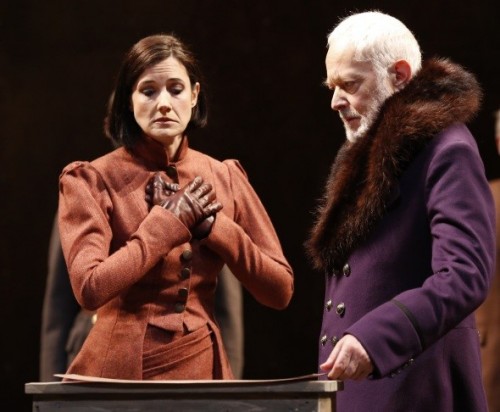 Regan gets her third or her half. 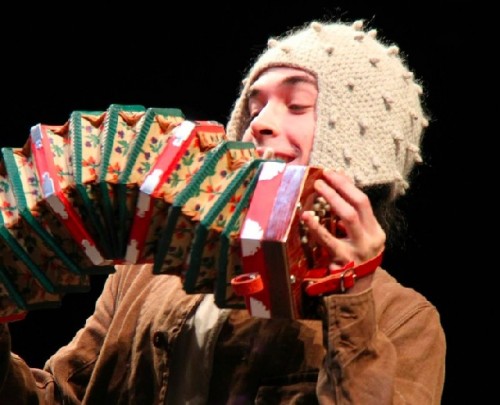 The Fool and his Accordion Comforting

Theatrical productions often try to imitate the movies. The audience’s eyes are glutted and its ears stuffed with sound.  Constant movement blurs primal responses to the action.

The production of King Lear, directed by Arin Arbus at the Theater for a New Audience, does not fall into this trap. Instead, a minimal set lets the beautiful language and the rich emotional life of the Lear family blaze with clarity.

This does not mean that sound, light and fury are not on display.  In addition to horns, a double bass and an accordion, the cracks of lighting and crashing thunder shake you to the soul, as they do the enraged and desperate King. The fool’s accordion is almost like the Willow song in its delicate madness.

This season at the Lyric Opera of Chicago, director Arin Arbus teamed with set designer Riccardo Hernandez in a brilliant production of La Traviata.  In Brooklyn, the team chose a minimalist set. A plank provides the backdrop. It is lit like a closeup of a Turner painting, suggesting the blood and battles that will ensue. King Lear and his daughters present their various cases at a simple stage center table which functions as a lectern. A chair also arrives as another solo prop on the stage.  It is Lear’s makeshift throne.

Pared down scenes let you focus on the language and the characters.  The purpose and pleasure of live performance are clear. Indeed, what a pleasure.

Many Lears who do not go gentle into the good night scream their way through the play.  Michael Pennington brings a more nuanced interpretation. His authoritative and imperious ruler of the play’s opening dissolves into the enraged, rejected father. All he has asked is for attention to be paid.

This is in contrast to the wild fury during the storm on the moors.  His anguished cries piercing the scene are musical and not just noise.

In reconciliation with his daughter Cordelia, we are forced to lean close to share the private, deeply-felt intimacy.  Arbus constantly contrasts public and private scenes.

Because the director has chosen to let Edmund, Edgar and Gloucester come forward representing nature and the choices in our stars, all of Shakespeare’s lush language as they muse and wonder about their natural and bastardly positions is heightened.

Lear daughters are more formal, less bitchy waiting for the king's death and their inheritance than wanna be leaders. They often stand separate but together on the stage but always apart. Not like witches boiling trouble, nor the Rhinemaidens, but more like statues, stand-ins for the live daughters battling over a will. Straight-backed and not very nice, they can’t keep their hands off anything that comes close, including Edmund with whom both Goneril and Regan desire an adulterous affair.

Shakespeare is about lust and crime and this production is rooted in its origins.  The daughters strip and offer themselves up sexually.  Sometimes they enter the stage in post coital disarray. Gloucester’s eyes are gouged out with unimaginable violence. Stabbing and sword fights leave the stage as bloody as the Bard did.

In the brilliant Arbus conception, you have both the still, uncluttered distance of simplicity and the gripping, awful consequence of jealousy and rage.

This controlled movement makes Lear’s traveling band with their slain deer and tipsy good-humor seem inappropriate to the girls’ courts.  Lear’s refusal to dispense them is understandably irritating.

The Scripps mainstage is a wonderful, cavernous, intimate space, at once both grand and personal. It is a perfect venue for the staging to this striking production of King Lear.