Bengal Tiger at the Baghdad Zoo By Ragiv Joseph 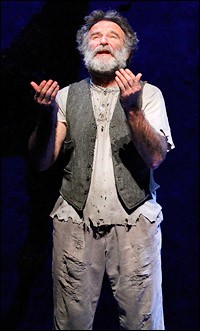 A scruffy Robin Williams is making his first visit to Broadway. 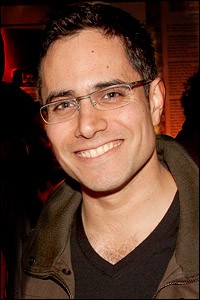 The play by Ragiv Joseph was nominated for a Pulitzer Prize. 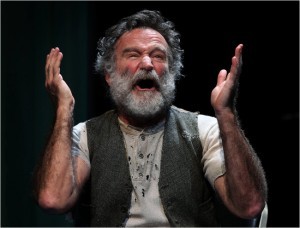 We feel his pain. 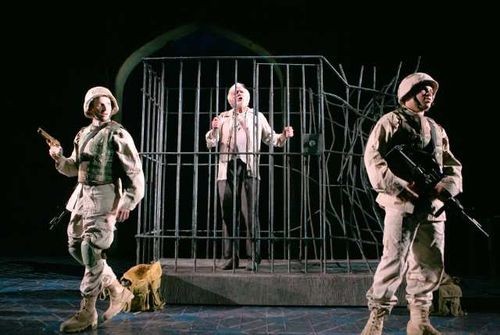 A scene in the zoo. 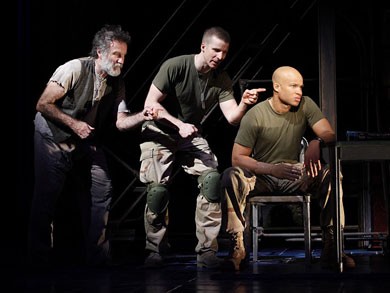 The Tiger mocking he soldiers. 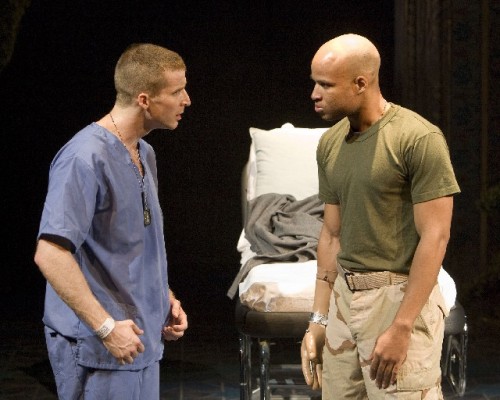 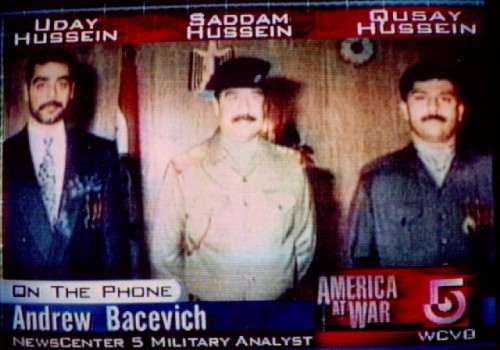 Saddam Hussein and his sons. 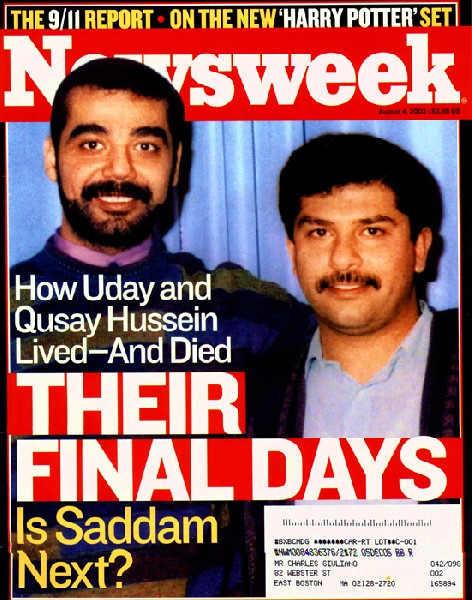 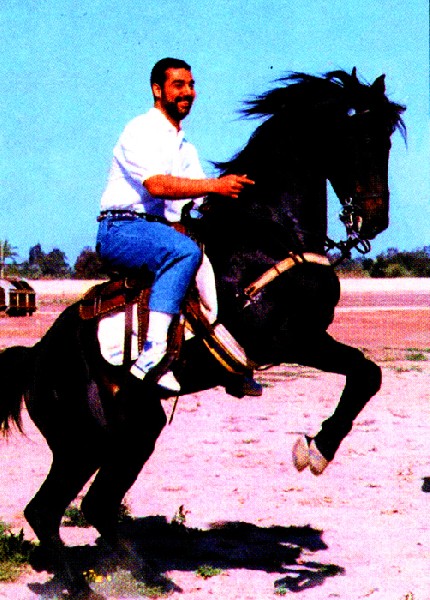 Back in the day Uday was riding high. 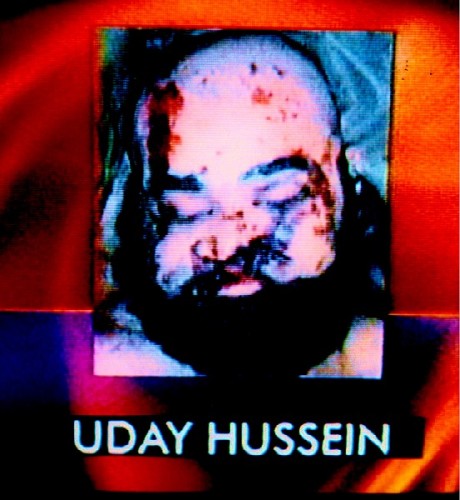 The bloody end of Uday. 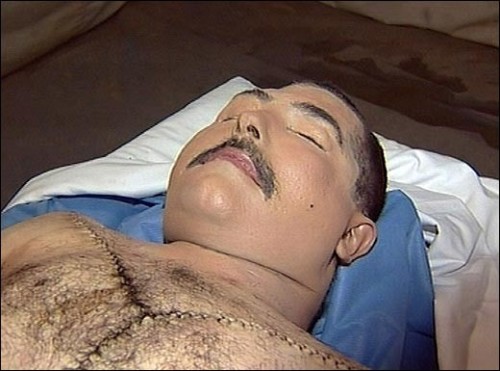 The corpse of Qusay Hussein, clearly not decapitated, on display to the media.


While Bengal Tiger at the Baghdad Zoo, by Ragiv Joseph, is hardly a comedy, its star, Robin Williams, is wonderfully ironic and droll as a caged beast caught in the cross hairs of the Iraqui war.

There is no attempt to disguise or transform him. Alternately snarling and bantering with the audience in humorous, philosophical asides, Williams is every bit credible as a pent up, sage and anguished, ersatz predator.

In his first, and long overdue visit to Broadway, we encounter a middle aged, scruffy Williams with a full, unkempt beard, and somewhat measured movements. The uniquely gifted actor, one of the finest of his generation, is now showing his years since he first captured our hearts, way back when, in the hit TV series, Mork and Mindy.

Seeing Williams live on stage is a rare and wonderous treat. His performance is every bit as fabulous as one might imagine. His name on the marquee is a huge attraction for audiences. But, while Williams is the star of this play which was a finalist for the Pulitzer Prize, and enjoyed a successful run in Los Angeles, well, he is just not on stage as much as one would hope. At best he appears in perhaps a third of the scenes.

Without the rush of energy that Williams provides the rest of the play seems forced and labored. There is a fine cast but the premise of the play, a fantasy about ghosts and mayhem, including the spirit of the murdered Uday Hussein toting the severed head of his brother Qusay, just doesn’t cut it without the whimsical spark provided by Williams.

The fantasy of Joseph was created based on a news item. A group of American soldiers were partying late at night in the Baghdad Zoo. As we see on stage a GI taunted the tiger with scraps of food. Foolishly he stuck his hand in the cage and it was mauled. On stage Tom (Glenn Davis) has it eaten by the tiger. In a rage his companion Kev (Brad Fleischer) shoots and kills the tiger.

It is a stunning and hilarious moment as Williams yells in ironic exasperation that of all the dumb luck he is shot. There is a great gush of red blood bursting from his chest. In that moment he is transformed as a ghost. With awe and wonder he steps out of the cage and is now free to wander the streets of Baghdad.

He proves to be but one of many ghosts including a frightened child with her face blown half off. The tiger tells us that the child is afraid of him. But why should she be? They are both dead. He is trying to mend his ways, perhaps to escape to tiger heaven. It is not good to eat children. But God has created him as a predator. So why does he have to atone for the nature and behavior that he was born with. It is the kind of musing that is so clever and hilarious. What an engaging metaphor to see the war through the eyes of a slaughtered tiger.

But that’s not all. Unfortunately. We are diverted into the anguish and dilemmas of Tom and Kev. It seems that Tom was part of the raid on the palace of Hussein’s sons. He managed to steal Uday’s gold plated gun as well as a solid gold toilet seat. My goodness. Talk about sitting on the throne. Tom shows the gun to Kev and says that the toilet seat, which he hopes to smuggle home, will set him up after the war. He has buried it in the desert.

Tom gets shipped back home where he is fitted for a prosthesis. He later returns hoping to retrieve his gold objects. Kev briefly had the gun but it is then stolen by Musa (Arian Moayed) a translator for the soldiers. It seems he was formerly the gardener for the Husseins. His specialty was elaborate topiary of the same kind of animals in the Baghdad Zoo. This now ravaged garden, wonderfully designed by Derek McLane, is woven into the plot.

The killing of the tiger is further cause for the unhinging of Kev. He ends up in sick bay where he is visited by Tom looking for his loot. As a result of their traumatic interaction Kev, emulating Tom, used a shard of glass to sever his hand. Now Kev is also a ghost.

But that’s not all. Musa is tormented by the ghost of Uday (Hrach Titizian). He is played over the top as a swaggering, arrogant butcher. Since Musa was a servant of the Hussein brothers Uday took advantage of him by raping his sister.

If dictators like Saddam Hussein are monsters their sons are worse. There is no limit to their abuse of power including torture, murder and assaults on women. We have been reminded of this recently in the reporting on Muammar Muhammad al-Gaddafi and his brutality in attempting to remain in power in Libya. The primary general in the defense against the rebels has been his son. In interviews they have stated that there will be no mercy shown in crushing their enemies (the people of Libya).

The Hussein brothers met their end in a hail of bullets. The bloody corpses of Uday and Qusay were displayed to the global media. Saddam was later hanged in a botched execution that resulted in his head popping off.

It is a lesson surely not lost on Gaddafi and his brood. Should they lose it is likely that they will face similar consequences.

Which gives this play a timely hook. But, truth is, the war/ occupation in Iraq drags on and the public has grown weary. The smarmy exploits of Uday Hussein are old news.

Bottom line, without Robin Williams as that wonderful, ghostly tiger, this fantasy about solid gold toilet seats and head toting ghosts, isn’t all that compelling. Like Tom's hand it’s, well, a lot to swallow.